More than $9 million spent on statewide ballot questions in 2012

By Tom Duggan on November 29, 2012Comments Off on More than $9 million spent on statewide ballot questions in 2012

More than $9 million was spent to influence three questions put before the voters on the 2012 statewide ballot, according to disclosure reports filed by ballot question committees with the Office of Campaign and Political Finance (OCPF).

Question 2, Prescribing Medication to End Life, had the highest amount of spending – $5,868,797 by seven committees. The question failed.

Question 1, Availability of Motor Vehicle Repair Information, had $2,304,999 in expenditures. The question passed.

Question 3, Medical use of Marijuana, had $1,131,113 in expenditures. The question passed.

The Committee Against Physician Assisted Suicide reported the highest amount of expenditures for any ballot question committee, $4,027,098, in a successful effort to defeat Question 2. The largest donors to the committee were the Boston Catholic Television Center, $1 million; St. John’s Seminary Corporation, $1 million; Knights of Columbus, $450,000; and The Catholic Association, $420,000.

The Massachusetts Right to Repair Committee reported the second highest amount of expenditures, $1,936,320, to successfully support Question 1. The committee’s largest donors were the Automotive Aftermarket Industry Association, $957,500; and the Coalition for Automotive Repair Equality, $210,000. Four automobile parts companies each gave $150,000.

The Committee for Compassionate Medicine reported the third highest amount of expenditures, $1,125,647, to support Question 3, which passed. Its largest donor was retired insurance company executive Peter Lewis of Mayfield Village, Ohio, who contributed $1,097,000.

Receipt and expenditure details for each of the 13 ballot question committees are itemized in the attached charts.

The highest amount of expenditures for any year was in 1992, when $16,139,661 was spent to influence eight questions.

In addition to the receipts and expenditures reported by 13 ballot question committees in 2012, they also reported a total of $1,113,867 in in-kind contributions.

Independent from the ballot question committees, six organizations made expenditures to oppose questions 2 and 3, and reported those expenditures electronically with OCPF. The Massachusetts Family Institute, The Trustees of Emmanuel College, Stonehill College, Anna Maria College, College of the Holy Cross and the Trustees of Boston College spent $48,264 opposing Question 2. An individual also reported spending $2,373 opposing the same question.

Reports filed by each of the committees may be found on OCPF’s Electronic Filing System, a searchable database accessible on the office’s website at www.mass.gov/ocpf. Reports filed by individuals and organizations are available at http://ocpf.cloudapp.net/Reports/Cpf22s.

A breakdown of activity for each question follows 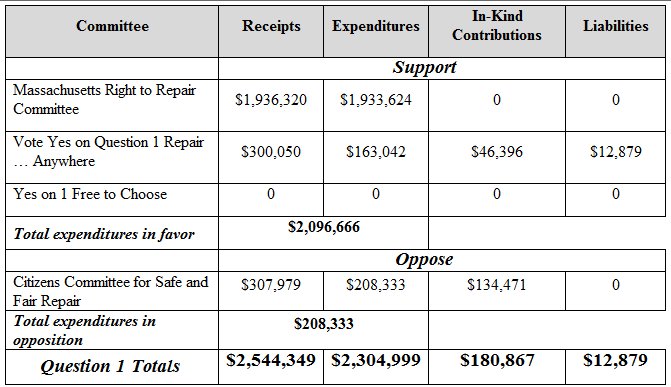 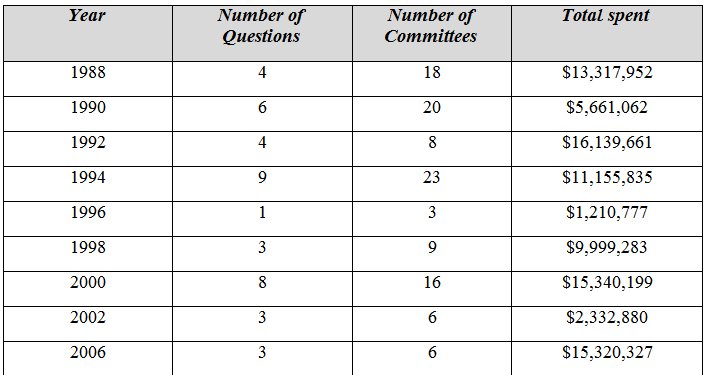 More than $9 million spent on statewide ballot questions in 2012 added by Tom Duggan on November 29, 2012
View all posts by Tom Duggan →