Most fundraising and spending records broken in 2013 mayoral elections

By Tom Duggan on April 1, 2014Comments Off on Most fundraising and spending records broken in 2013 mayoral elections

All major mayoral fundraising and expenditure records, which former Boston Mayor Thomas Menino held during his 21 years as mayor, were eclipsed during the 2013 election, according to a study of campaign finance reports filed by mayoral finalists.

The 63 mayoral candidates in 2013 reported total expenditures of $8.8 million and receipts of $8.5 million – both records. Candidates also reset the record book on totals per race, totals per vote and totals for individuals.

The driving factor was the Boston mayoral race, which opened up just seven months before the general election with Menino’s announced retirement from public office.

Boston mayoral finalists Martin Walsh, a former state representative, and John Connolly, a former city councilor, reported total combined expenditures of $6,020,548 for the calendar year, the highest total for any mayoral race in state history. The previous record of $4.1 million was set in 2009 by Menino and his opponent, Michael Flaherty.

On the other end of the spending spectrum, Haverhill Mayor James Fiorentini logged the smallest per-vote total for an opposed, winning candidate: $1.72 per vote. The contested race with the least spending was in Gardner, where Mayor Mark Hawke and challenger Christine Wilson spent a total of $13,143.

OCPF began issuing mayoral studies after the 1997 city elections. The 2013 study is available by clicking here, and is limited to those candidates who were on the ballot in the November election in cities and does not include those who were eliminated in preliminary elections. 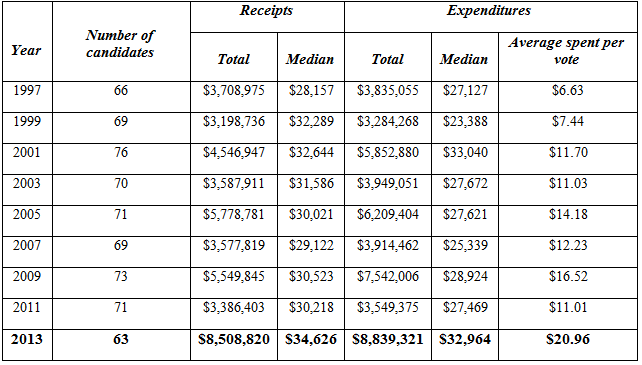 Most fundraising and spending records broken in 2013 mayoral elections added by Tom Duggan on April 1, 2014
View all posts by Tom Duggan →