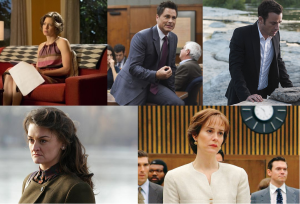 The Primetime Emmy nominations will be announced next week and every year I like to review the past year in TV and give my Emmy Wish List. There are always great performances that get overlooked each year. This is a list of performances and shows that I think really deserve recognition by the Television Academy. Here we go!

In the Lead Actor in a Comedy series category, the one person I fear will be overlooked but shouldn’t be is Rob Lowe for The Grinder. Lowe was hilarious as Dean Sanderson, an actor who played a lawyer on TV and was now trying to live a new life as part of his family’s law practice because he thinks he knows all about the law from his years on TV. Lowe was excellent in the role that made fun of actors who take their roles so seriously, and looked like he was having a blast doing it. Unfortunately, The Grinder wasn’t renewed, so this will be Lowe’s only chance for a nomination for this role.

The Lead Actor in a Drama Series category is by far the toughest category this year. So many actors are worthy of a nomination, but with only 5 nominees some actors will be overlooked. So with that in mind, I’m really hoping that a couple of actors get recognized.

The first of those actors is Justin Theroux from HBO’s The Leftovers. In my opinion Theroux’s performance was the best on TV over the past year. All anyone needs to do is watch the episode “International Assassin” to see that he deserves this award this year.

Another actor who really deserves a nomination in this category is Freddie Highmore from A&E’s Bates Motel. His performance as a young Norman Bates was outstanding this season, as it has been throughout the series entire run. Whenever Norman transformed into his mother this season, Highmore took his acting to another level.

There are others, as I said this category is packed. Kyle Chandler for Netflix’s excellent series Bloodline. Damian Lewis and Paul Giamatti for Showtime’s Billions. Kevin Spacey for House of Cards. Bob Odenkirk for Better Call Saul. Matthew Rhys for The Americans. Such a strong field.
The Lead Actress in a Drama Series category is also a tough one. For me there is one clear cut performance that should not be forgotten, and that’s Carrie Coon from The Leftovers. Look no further than the episode “Lens.” Coon’s face to face scene with the always excellent Regina King was one of the best scenes of the year. But it didn’t end there. Coon’s performance as a woman who lost her entire family to “The Departure” and was forced to pick up the pieces and move on in season one, blossomed even more in season 2.

There are few other nominations that I don’t want to forget. In the interest of space, I will run through them quickly.

Alison Wright had a breakout season in her role as Martha on The Americans. As viewers our hearts broke when Martha learned she had been duped by the man she loved, who turned out to be a Russian spy. The only thing I’m not sure of is if Wright has entered in the Guest Actress category, or the Supporting Actress category.

Sarah Paulson was so good in her role as Marcia Clark in The People vs. OJ Simpson. She stole every scene she was in. She is definitely worthy of a nomination.

Finally, in the Outstanding Drama Series category, I would love to see The Leftovers get a nomination. It was, in my opinion, TV’s best drama series over the last year. Also, it’s about time that the Television Academy recognized The Walking Dead. It has consistently been one of the best series on TV every season since it has been on and it has been consistently ignored. It’s time to recognize it with a nomination for the show and its actors.

We’ll see when the nominations come out on July 14th.

Who would you like to see nominated? Hit me up on Twitter or Facebook and let me know! Do you have any questions about TV? Email me at BillsTVTalk@gmail.com. I will answer all of your questions and will feature some of the questions I receive in a future column.Follow Bill on Twitter @BillsTVTalk and on Facebook at Bills TV Talk for daily up-to-the-minute TV news and discussion.