By Tom Duggan on June 3, 2006Comments Off on National Red Cross Caught Red Handed Trying to Throw Flood Victims into the Streets 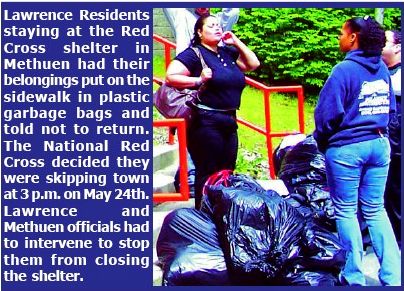 Flood victims from Lawrence, North Andover and Methuen who were staying at the Red Cross shelter in Methuen during the immediate aftermath of last month’s flood say that they were treated so badly by the National Red Cross that their view of the organization has been shattered forever.

The devastating flood that displaced thousands of Merrimack Valley residents last month caused many people to rely on organizations like the Red Cross. But, just days after National Red Cross officials descended onto Methuen High school to replace local volunteers, the Red Cross tried to skip town and toss more than 63 homeless people out on the streets.

“We were under the impression that the Red Cross was trying to find us a place to live the whole time we were here,” said Rocio Mercado of Holly Street in Lawrence.

“But for ten days they didn’t do a thing to help us find housing. Then last night they came out with a cake that said ‘Good Bye and Good Luck.’ Then they announced that the shelter was closing today (May 24) at 3pm and the doors would be locked. We were devastated because we have no place to go. We wasted ten days thinking the Red Cross was doing something and now they are throwing us out on the streets.”

Eviction signs were put on the walls of the gymnasium by the Red Cross, informing flood victims that they had to be out of the building by Wednesday May 24th at  3pm.

Flood victims began to panic thinking they were about to be homeless again. National Red Cross officials had packed up flood victims’ personal belongings, placed everything in boxes and plastic bags and put their items on the sidewalk, while other Red Cross officials loaded up a Budget rental van with supplies.

Lawrence Planning Director Michael Sweeney, appointed by Mayor Sullivan as the disaster relief coordinator for the city of Lawrence, said he had been communicating with the Red Cross during the flood and the aftermath of the cleanup. But Sweeney said that throughout the ten days following the flood, the National Red Cross “never once told city officials that they would not try to find housing for people who ended up homeless because of the flood.”

“If they had just given us that information in the first place, the city of Lawrence would have had people making phone calls to find housing for these people,” Sweeney said. “Instead, the Red Cross simply announced to people that the shelter was closing …good bye and good luck.”

Contacted by The Valley Patriot, one official from the National Red Cross said that they were closing the shelter on May 24th because Methuen Mayor Bill Manzi “wants us out right away.” 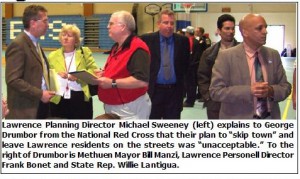 Mayor Manzi disputed that account saying it was his understanding that the Red Cross was going to stay until every flood victim had a place to stay. Mayor Manzi, Police Chief Joe Solomon and Superintendent Phil Littlefield went down to the shelter on May 24th where they were joined by Michael Sweeney and Lawrence Personnel Director Frank Bonet to confront the Red Cross and make it clear that they wanted the shelter to remain open until all flood victims found safe housing.

That’s when Red Cross officials changed their tune and assured city officials from both municipalities that the shelter would remain open until everyone was relocated.

“Look, it’s been a total nightmare over there at that shelter,” Sweeney said.

“We got a call from some of the Lawrence families staying at the shelter, crying, saying they were being thrown out on the street this morning with no place to go. Last week this shelter turned away a blind man because they said he had some special need and they could not accommodate him. The only need this guy had was a need to find some place to sleep and they literally turned him away.”

According to Red Cross Spokesperson Gorge Drumbor, the Red Cross provides first and last month’s rent as well as a security deposit, but “the flood victims themselves are responsible for calling landlords and finding a place to live.”

“We only facilitate here,” Drumbor said. “We can put victims in touch with other agencies that can help them find placement but, as a policy, we do not do that.”

“That would have been a pretty good thing to tell us ten days ago,” Sweeney responded. “In fact, on Monday and Tuesday (May 22 & 23), officials from the Red Cross told me and Mr. Bonet the exact opposite, and assured us they would not close the shelter until everyone was placed in a safe living situation. They simply lied to us and mistreated people.” 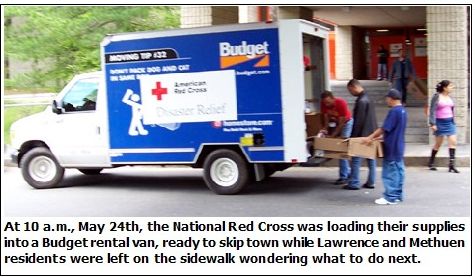 Asked why a blind man was turned away last week when there was clearly plenty of room at the shelter for him, Drumbor said that he did not know the specifics of the incident, but that it was his understanding that someone from the Red Cross was trying to find another shelter that could accommodate his needs. According to Drumbor, the Red Cross does not help individuals with special needs.

Drumbor also denied that anyone was being thrown out of the shelter on Wednesday, May 24th. “It was only an internal target to have these people out of the shelter and placed by today, Drumbor said. “We never told them they had to leave and we would not have thrown them out on the streets.”

While Drumbor was answering that question, Red Cross officials were in the process of ripping down signs at the shelter and demanding that residents of the shelter vacate the premises by  3pm. Asked why signs were posted informing people they had to leave by  3pm, Drumbor said he didn’t have an answer.

“How are people with no phones and no transportation supposed to call landlords, find a place to stay, get a letter from the landlord so they can get the Red Cross vouchers for the rent, and then bring it back here to the shelter”? Sweeney asked. “It’s total insanity.”

According to Lawrence Mayor Michael Sullivan’s office, officials from the city of Lawrence had “tasked people to make phone calls immediately after finding out the Red Cross was trying to skip town and leave these people in the streets.”

“It has been horrible every time I talk to someone who tells me they are in charge and I start to explain the dire need of these victims. But as soon as I ask them to make a command decision, suddenly I am told I have to talk to someone else. It’s no wonder there were so many problems in New Orleans after Katrina. This is the problem, the National Red Cross.”

“This is all because of red tape,” Jessie Mercado added. “It’s all about the policies and the politics. We just need a place to stay and we have no way to get around.”

Mercado and his wife Rocio said things at the shelter were going “OK” until “the local [Red Cross] people were no longer in charge. As soon as the people from out of state came in and took over, everything changed.” 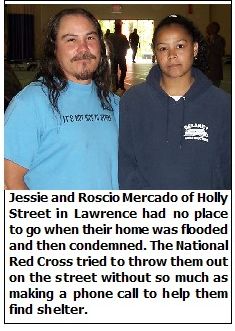 Both Rocio and Jessie Mercado said that they were “very grateful to the mayor of Methuen and the people of Methuen” for housing them at the high school. “We heard that the mayor is getting blamed for trying to have us thrown out of the shelter before we could find a place to live. That’s just not right. We are not even from Methuen and they have done so much for us, we are very grateful.”

Methuen Mayor Manzi said that he, along with Sweeney and Bonet, were personally making sure nobody gets thrown out of the shelter and that “they can stay there as long as they need to.”

State Representative Willie Lantigua tried to mediate between the different officials and the flood victims, some of whom did not speak English. After several private discussions with various officials, Representative Lantigua announced to the flood victims that they would be permitted to stay in the shelter, and assured them that “the situation was now under control.”

Red Cross officials, on the other hand, tried to spin the story telling residents of the shelter that it was “all a miscommunication,” adding that they were “happy to stay and help them any way they could.”

Officials would not say how much donation money the Red Cross has received for the devastating flood that affected most of the Merrimack Valley for more than ten days.

Ironically, officials from the city of Lawrence were able to find housing for all but one family living in the shelter within 48 hours of finding out that the Red Cross was not helping people find a place to live.

“We were able to accommodate every family that was stuck in the Red Cross shelter by either getting them into temporary apartments, permanent housing or in some cases we were able to get them into hotels.” said Personnel Director Frank Bonet.

Lawrence Mayor Michael Sullivan said that he was very proud of the way Sweeney and Bonet handled the situation. He then emphatically added, “but I was even more proud of the Lawrence families involved in this whole fiasco. They handled themselves so well.”