By ValleyPatriot on February 28, 2021Comments Off on Navy Veteran and Arson Investigator, Lawrence Detective Tom Murphy ~ VALLEY PATRIOT OF THE MONTH, HERO IN OUR MIDST 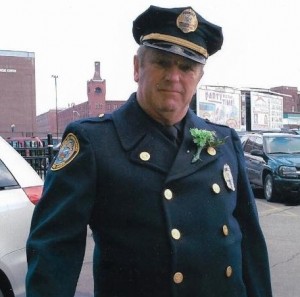 This is our third US Navy Seabee, who after serving in the Navy, became a police officer. Tom Murphy Jr. is a retired Lawrence Police Officer, who later retired from the Merrimack College Police Department as well. He grew up across the street from my father Jim, and my four uncles, on the corner of Bowdoin and Brookfield Street. Tom graduated from Lawrence High School, class of 1966. We spent a few minutes discussing the crowds at the Lawrence High football games in the 1950s, 60s, 70s and early 80s.

Tom recalled that the Lawrence Police details for the games often consisted of ten or more officers. Even more officers were needed for the Lawrence vs Lowell rivalry game on Thanksgiving Day when temporary bleachers were set up in the end zones for the overflow of fans. The Lawrence High Football Program, back then, could put 10,000+ fans in the stands. Lawrence High School also sent three players into the NFL, during the 1950s, Bill Quinlan, who played for the Browns and the Packers. Later from the 1970s, Ray Preston and David Rozumek. Ray Preston played for the San Diego Chargers, and David Rozumek played for the Kansas City Chiefs. Bill Quinlan’s 2003 oral history by historian, Cliff Christl, is on the Packer’s team website, is a must read for football fans.

Military service in his family, included his Great Grandfather Timothy Murphy, who served with Company G of the famous “Fighting 69th” during the American Civil War. His dad, Tom Murphy Sr, was a U.S Army Cook during World War II, serving mainly in Texas.

While in the US Navy, Tom served on an Albany class Guided Missile Cruiser, the USS Columbus CG-12, a ship named after the City of Columbus, Ohio. It was assigned to the Mediterranean during Tom’s period of service. Tom served as a Storekeeper. During that time, he received an award from the US Navy Supply Department Commander for his outstanding work. After leaving active duty, he served with the US Navy Seabees at the Navy and Marine Corp Reserve Center in Lawrence as a Third-class Petty Officer holding a Storekeeper rating. The Center was closed by Congress by the 1995 Base Realignment and Closure Commission.

Another memory Tom shared, was being part of the security detail, serving with fellow Veteran, Massachusetts State Trooper Jack Garvin, at the dedication of Division 8, Ancient Order of Hibernian’s, Hall, on Sunday October 25, 1981. The Irish Cardinal who blessed the building during the dedication was Tomás Séamus Cardinal Ó Fiaich. He served as the Catholic Primate of all of Ireland and Archbishop of Armagh from 1977 until his death. Tom is a devout Catholic and a member of the Hibernians. On Saint Patrick’s Day 2015, Tom was honored as the Grand Marshall of the city’s annual St. Patrick’s Day Parade.

We talked about many topics regarding law enforcement. First, was the infamous career criminal Willie Horton, who killed a Lawrence teen. Joe Fournier was working at a gas station when Horton killed him during a robbery. The second crime, we discussed was the disappearance of Andy Puglisi, from the South Lawrence State Pool. Detective Murphy praised Retired Sgt. Tony Lorenzo and the late Officer John Lundy, who were both instrumental in solving the Fournier murder, resulting in Horton’s arrest. Both crimes left a lasting impression on me as a child, and I vividly remember the neighborhood reaction to them. Joey Fournier, the young man Horton killed, was a few years older than me, Andy Puglisi was three years younger. The deaths of these two young men cast a shadow over my neighborhood for many months. The South Lawrence East neighborhood, while working class during the 1970s, was very safe, and our streets were always filled with children and parents.

The deaths of five family members in a house fire that occurred on 397 Lowell Street during February of 1988, affected him deeply. A brutal murder of eleven-year-old Melissa Tremblay, in September of the same year, in the Boston and Maine Railroad yard, off Andover Street, a crime he investigated, will always be on his mind, until the case is solved.

Tom served in a transitional time for police work, having a career that started with the iconic police call boxes, and traffic officers on three wheeled motor bikes, and ending with the internet and dash mounted laptops in patrol cars. Detective Tom Murphy retired from the Lawrence Police Department in 2005, after serving for 32 years. He was a detective specializing in arson investigations, auto theft, and insurance fraud. Murphy talked about the dedicated members of Federal investigators from ATF and Massachusetts State Police Fire Marshal’s Office. He served, along with Lawrence Fire Department Arson Investigator, the late Lt. Jack Burton, both men working together investigating the arsons that occurred in the City of Lawrence during the late eighties and early nineties. “Those were very busy times”, he stated.

He is the father of four, and the grandfather of eight, one of his sons is now serving as a police officer. His wife Lynne would also be a great story, her parents were in the US Foreign Service, she was raised mainly in South America, and speaks both English and Spanish fluently. While her parents served their last five years with the Foreign Services in Vietnam, Lynne completed high school in Chile. After graduating, she went to live with her Polish Immigrant grandparents on Avon Streetin Lawrence. While living on Avon Street, she and Tom met.
A “Hero in Our Midst”, a policeman, a veteran, a father, a grandfather, and a husband.

John Cuddy served in the US Navy’s Construction Battalions (also known as the Seabees) after retiring from the Navy; he earned a bachelor’s in history and a master’s in economics from the University of Massachusetts on the Lowell Campus. He has been employed in Logistics at FedEx for the last 24 years. If you know a World War II veteran who would like their story told, please email him at John.Cuddy@Yahoo.com.◊

Navy Veteran and Arson Investigator, Lawrence Detective Tom Murphy ~ VALLEY PATRIOT OF THE MONTH, HERO IN OUR MIDST added by ValleyPatriot on February 28, 2021
View all posts by ValleyPatriot →