By Tom Duggan on January 18, 2013Comments Off on New Book to tell the tales of Lowell’s Own Bobby Christakos

THIS BOOK HAS BEEN PUBLISHED, READ FIGHTING SPIRIT HERE 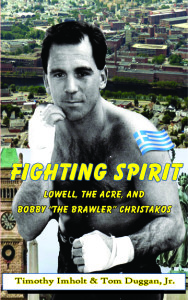 Five-time Golden Glove boxing champion, Bobby Christakos may live in a modest home in a quiet neighborhood in Lowell, but once visitors get a look inside it is clear that this is not the home of any ordinary Lowell citizen.

Lining the walls and ceiling of his garage are awards and photos of Christakos with various celebrities and boxing greats. Christakos, the only person to win the Golden Gloves five times in a row, will be the subject of now a book called “The Brawler”.

“And if things go well,” Christakos told the Valley Patriot in an exclusive interview, “hopefully they are going to make a movie when the book is done. We wanted to call it The Fighter,” he said laughing. “but, that one was kind of taken.”

In 2010, Mark Wahlberg and Christian Bale starred in the hit movie “The Fighter” about another Lowell boxing champ, Micky Ward.

“John Dousterlaros came up to me at the Owl Diner, and he had heard me telling stories about the old days when my father ran a bookie joint, the cops on my father’s payroll, the celebrities and the politicians who used to come in. He said he wanted me to tell him my stories so we could put it in a book,” Christakos said.

“He sat down with me every Friday for over a year and I told him my stories. It’s slated to come out by the end of March.”

Christakos was animated as he shared stories in and out of the ring. In his boxing career he had 98 wins and 9 losses with 42 knockouts. Christakos fought five Gold Glove Champions including Mariln Starling Vinny Pazienza, Bobby Sims, and Bobby Joe Young.

Getting his Start in Boxing

“I was in front of my father’s coffee house one time, my father was a bookie on Market Street. So, this guy walked by with a long hair and a beard, he looked like a drug addict or something. And I had a big mouth back then so, I asked him ‘What’s your F*ing problem?’ My father said to me, ‘Hey, you started it, go fight him.’”

“I got my ass beat bad by that guy. After that my father said, ‘you are going to the gym, you better learn how to fight with that big mouth of yours.’ So, I went down to the gym and started training with Irish Beau Jaynes, Manny Freitas, Steve Coop, Dicky Eckland, Mickey Ward, and Jimmy Lopez. I mean these are all guys who are great fighters.”

“I remember sparring with Manny Freitas, man you could hit him with a pipe. I was only 16 years old, he was like 25 years old. But, my father always told me, if you spar with the best you are going to be the best. If you spar with a bum, you’re going to fight like a bum. You want to spar with someone better than you.”

“All of sudden, I am fighting in the Golden Gloves and I won. I won the championship. Imagine, from getting my ass kicked to being a Golden Glove winner. It was amazing,” Christakos recounted with excitement as if it had only happened yesterday.

Life is Stranger than Fiction

“One day, after winning my 5th title, I was looking across the street and I see the guy, that guy who beat me up five years earlier, and he took a couple of cheap shotsgiving me the boot that first time.”

“I said hey, you remember me? He said, ‘I just got out of jail, I was in for three days leave me alone.’ I put him down with one punch. I said remember me now? Now, Tiny Mulligan the cop is standing right across the street and saw me beating the guy. He didn’t know what to do. When it was all over he ended up arresting the other guy for assaulting me,” Chirstakos said giggling.

A Change Meeting with Whitey Bulger

“Everyone came into my father’s place. Everybody. We had Congressmen, we had gangsters, we had cops, we had the guy who lived down the street. Whitey Bulger went in there, the whole Winter Hill Gang hung out there.Guys like Manny Bello, Jackie McDermott, Peter Sinderas, Allan the Closet, Rifleman Flemmi, who is still alive today. These guys were in my father’s place all the time.”

“I walked in one day and my father said, ‘get out!’ He was meeting with a bunch of guys. I could see this guy and the two goons with him didn’t want me there, so I said. ‘No’.”

“I had no idea who this guy was, but Whitey says ‘hey kid come here.’ He smacked me in the back of the head and handed me a $100 bill and told me to go get him some coffee.”

“I get to the store and the coffee is only 15 cents. I handed the lady the $100 bill and she got mad, she said ‘What am I supposed to do with this?’ I said ‘it’s for some guy named Whitey Bugel, Whitey Bungle? She grabbed the money right out of my hand and said “give me that” and handed me $99.85 in change. When I brought the guy his coffee, he slapped me the head again and said ‘take the change and get the F* out of here and don’t come back for two hours.’”

Christakos says that not everyone who frequented his father’s “bookie joint” was a criminal or a gangster or a politician on the take. “We had regular people too. It wasn’t just criminals all the time like people think,” he said.

“You know, back in those days it was normal. It wasn’t corruption, it was just the way it was.”

“When Davis was on vice-squad in Lowell, he arrested my father, and he pushed him. Me and my brother Butchy, we both went after Davis. Next thing you know they hit a panic button and 30 cruisers show up.” Christakos said that eventually the cops separated everybody but the only thing they were really concerned about was keeping Bobby and his brother Butchy apart.

“But it’s funny, now, me and Davis are friends. In fact, he has done a few favors for me recently and he didn’t have to do that. But we go way back and it’s nice that some of the guys from back then help each other out, you know?

The first book signing for “The Brawler” will be in July at the Spinners Field. “Drew Webber says that’s what he wants me to do, and I love that guy. He really is the best,” Christakos said. The Valley Patriot will be closely following the book release and will publish more of our interview with Bobby Christakos in the coming months. Chistakos will also appear on WCAP’s Paying Attention with Tom Duggan later this month.

New Book to tell the tales of Lowell’s Own Bobby Christakos added by Tom Duggan on January 18, 2013
View all posts by Tom Duggan →