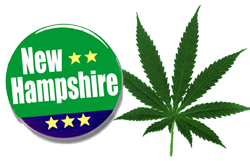 Granite Staters might assume that New Hampshire Governor Maggie Hassan’s pledge to veto legislation passed this month to legalize marijuana would end the discussion of the issue for this legislative session. Instead, it has intensified the debate at a time when marijuana policy is making history and emerging as a major national issue. At the same time, it has exposed an unfortunate and massive hypocrisy within the pro-freedom movement.

Earlier this month, the New Hampshire House of Representatives approved legislation legalizing marijuana for recreational use. In doing so, it gave New Hampshire the distinction of having the first legislative body ever to pass such a measure. This comes the same month that Colorado and Washington begin legal sales of pot. However, in those instances, voters approving ballot initiatives, not lawmakers, made it possible. The issue is rapidly growing on the national stage as marijuana advocates have secured enough support to put legalization on the ballot in Alaska and have their eyes on several other states.

Marijuana policy is an uncharacteristic topic for me. It is one of the few polarizing issues that I do not have a passionate position. Abortion? I’m pro-life. Gay marriage? I’m for it. Obamacare? I despise it. Marijuana policy? I could not care less. For my money, I think smoking pot for non-medical uses is boorish and immature but if individuals want to engage in it in such a way that does not endanger the public, then fine. Someday someone will have to adequately explain to me how we test and prevent people from getting high and getting behind the wheel of a car.

That said, the particular legislation passed by the New Hampshire House is an affront to everything supporters of free markets and small government purport to support.

Now, before my libertarian and conservative friends scream “RINO” or “anti-freedom” allow me to explain. As a conservative, I do not support needless or expansive new taxes that grow government. Nor do I support massive new regulatory structures. Burdensome taxes and regulations are an anathema to free markets. What does this have to do with New Hampshire’s marijuana legalization?

New Hampshire’s version of legalization comes with more than a few strings attached. The legislation legalizes up to 1 ounce of marijuana for recreational use for anyone age 21 and older. It also would allow adults to grow up to six plants for personal use. All innocuous, in my view. However, it goes on to impose a new $30 wholesale tax on every ounce of marijuana sold. The going rate for a medium-quality ounce of marijuana in New Hampshire is about $290, according to priceofweed.com, which collects submissions of local cost. Additionally, the legislation only allows licensed and heavily regulated marijuana retail stores and licensed facilities to cultivate and manufacture marijuana.

For my conservative principles, this new tax and massive new regulatory scheme would make the legislation a non-starter. No Republican who supported this legislation will ever be able to say that they have never supported a new tax that grew government. Yet to my surprise, liberty activists declared passage of such measures as being on “the right side of history” and praised supportive legislators as “freedom fighters” stopping the immoral “war on drugs.”

These developments are as extraordinary as they are confounding. I think the vast majority of the public can agree that it is a waste of time and public resources to throw individuals in jail for smoking a joint or using weed for medical purposes. However, in advocating for full legalization, conservatives appear to be embracing the principles of big government liberalism for the sake of the freedom to get high. What a sorry way to sell out your beliefs. Is smoking weed so important to justify forsaking and undermining the free market and small government?

Were this not bad enough, passage of the marijuana legislation dominated media headlines across New Hampshire for several weeks, detracting from the legislature’s more important duties, such as job creation and maintaining a balanced budget and the state’s fiscal health.

Make no mistake, Governor Hassan’s pledge to veto marijuana legislation is not motivated by her concerns for keeping taxes and regulations less burdensome. Rather, it is likely that Hassan prefers to stay on the safe side of a controversial issue in an election year. In the end, Hassan is right for the wrong reasons. Equally unfortunate is that some conservatives have prioritized marijuana legalization over smaller government and the free market.