By ValleyPatriot on November 28, 2017Comments Off on New Netflix Series ‘Mindhunter’ Will Have You Hooked ~ TV TALK with BILL CUSHING 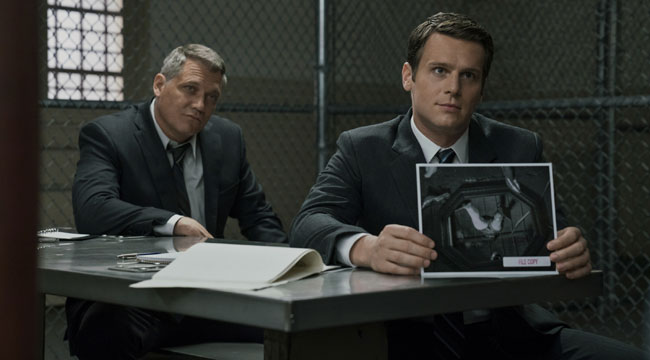 “How do we get ahead of crazy, if we don’t know how crazy thinks?” That is the question posed by FBI Agent Bill Tench in the riveting new Netflix series Mindhunter.

Tench (Holt McCallany) presents that question to his boss, a hardened bureau man who considers psychiatry as something that old-fashioned crime solving is better off without. Along with his partner Holden Ford (Jonathan Groff), Tench is trying to convince the bureau that picking the minds of the most sickening killers can provide a window into understanding similar minds in the future and thus solving or even preventing violent crimes. Tench and Ford are based on real-life FBI Agents Robert Ressler and John E. Douglas.

Set in 1977 and loosely based on a memoir by Douglas, this unusual, unsettling, extremely binge-able show goes back to the very beginnings of the bureau’s Behavioral Science Unit. The show is executive produced by director David Fincher (House of Cards, Seven, Fight Club, Gone Girl) and Oscar winning actress Charlize Theron (who does not appear in the series) and follows the FBI team that first studied the behavioral psychology of murderers, subsequently invented the term “serial killer,” and started the process we now know as criminal profiling.

Tench and Ford’s ideas, seen as nonsense or immoral by other law enforcement officers at first, become a systematic study of how these killers function. Their theories start to show results and help them solve other murders. A great thing that Mindhunter does is it moves away from the regular procedural stories of the killer as an unseen person only to be revealed in the climax of each episode. Instead, we see the agents getting close to these killers and sharing notes with them over coffee and cigarettes. The interview scenes with each killer they meet are enthralling and so well acted that you can’t take your eyes off the screen. We also see many episodes open with brief glimpses of Dennis Rader, the Kansas man who will later become known as the BTK Killer. Rumor is that he will be Ford and Tench’s target in a second season.

The transformation of Agent Ford is an interesting element of Mindhunter’s first season. Talking to serial killers, understanding serial killers, saying the inappropriate things to connect with a serial killer. This is Ford’s particular skill, and the viewers start to wonder how normal a man with these skills can be. He is able to form an eerie bond with these killers on the strength of his morbid curiosity. Soon after sharing an egg salad sandwich with Kemper, he’s ordering one at a restaurant. His girlfriend has to remind him he doesn’t like them. As a viewer, it had to make me wonder if we weren’t seeing the beginning of Agent Ford’s descent into the same obsessive behavior of the killers he studies.

Mindhunter crackles with great writing and superb acting from the main characters. Groff, McCallany, and Anna Torv (Fringe) all give fantastic performances. But some of the shows best performances come from the actors playing the killers themselves. Especially one was an extremely unnerving performance by Cameron Britton. Britton stands out in every imaginable way as the six feet and nine inches tall, 300-pound killer Edmund Kemper who has an IQ above 140.

If you’re not a fan of gore, don’t worry. There is very little graphic gore here. Unlike most serial-killer shows or movies, Mindhunter offers only brief glimpses of grainy crime-scene photos. Don’t misunderstand, the series doesn’t shy away from the horrific acts of these killers, but it addresses them mostly in words, which are graphic and ugly enough.

The series is a fascinating look into the minds of these psychotic criminals and the men and women that investigate them, while weaving the personal lives of the agents into the story as well.

Mindhunter is available to stream on Netflix.