By ValleyPatriot on March 7, 2012Comments Off on Newcomer Defeats Lantigua on Democrat Committee 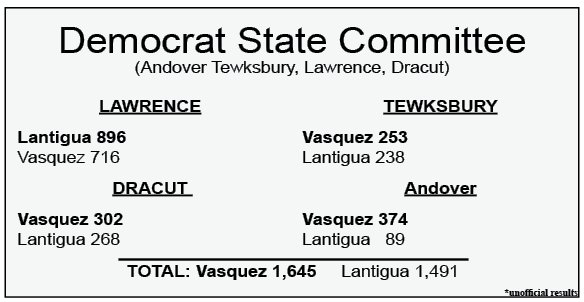 On Super Tuesday the voters of Lawrence, Tewksbury, Dracut and Andover not only cast votes for President but voted for local and state party committees. 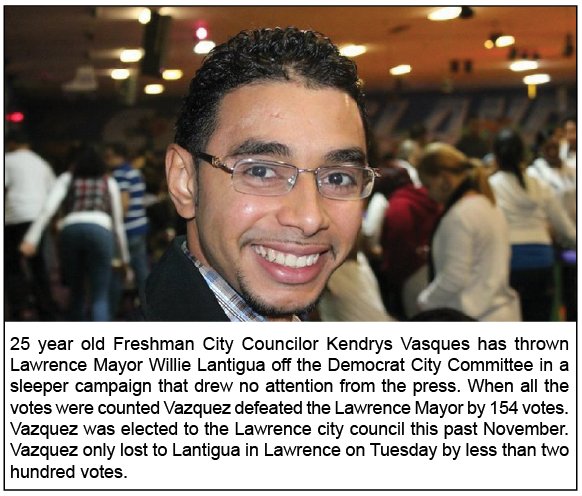 Lawrence’s Mayor William Lantigua was on the ballot to be reelected to the Democrat State Committee. His only opponent was Lawrence District “C” City Councilor, Kendrys Vasquez.

When all the votes were counted Vazquez defeated the Lawrence Mayor by 154 votes. Vazquez was elected to the Lawrence city council this past November. Vazquez only lost to Lantigua in Lawrence on Tuesday by less than two hundred votes.

Vazquez an ‘08 graduate of Merrimack College in North Andover (majoring in Political Science) is by no means new to public service; He has served as a volunteer and is on several boards in the city including; Semana Hispana and Arlington Community Trabajando.

Vazquez admitted that he only filed the documents needed to be on the ballot on the day of the legal deadline.

“Lawrence needed representation and no one else had submitted it (nomination documents)” he told The Valley Patriot.

So, he says, he decided to go ahead and “throw his name in the ring.” He went on to explain that from his understanding, Lantigua had done the same and filed at the last moment.

When asked what he thought his main role will be as a Democrat State Party Committeeman, he explained that he will be a liaison between the party and members of the local community. He also vowed to help local leaders run for office. Vasquez says that the one thing he will be doing differently than Lantigua will be attending the State Committee meetings.

One would assume that this is an obvious duty of the elected office however a little research by The Valley Patriot revealed that on the Massachusetts Democrat’s website we found that Lantigua has not attended a single meeting in the last two years.

Councilor Kendrys Vazquez also said that he has yet to speak to the mayor since his win but does not think that it will hurt their relationship.

“I always try to keep a professional relationship with the mayor,” he said, “as it is very important to help move the city forward”.

Vasquez went on to explain that, since being elected to the Lawrence City Council it has allowed him the opportunity to connect with the residents in his neighborhood. He told us that he “did the homework and met with all department heads” which he said was important in helping his constituents.

When asked what his top priority was as a Councilor he said that is was public safety “we need to make sure our city is safe for residents and for business owners”. Vasquez concluded by saying that as the Democratic State Committee Representative he planned on being “more vocal” and making sure that local elected leaders are provided with the proper resources they need to represent their districts.

Gary is a senior at Merrimack College studying political science. He is also a former candidate for the Lawrence city council and the Greater Lawrence Technical School Committee. You can email him at manniong@merrimack.edu