By Tom Duggan on September 22, 2017Comments Off on News Media Cover Up – The Nazi Rally in Boston Never Happened 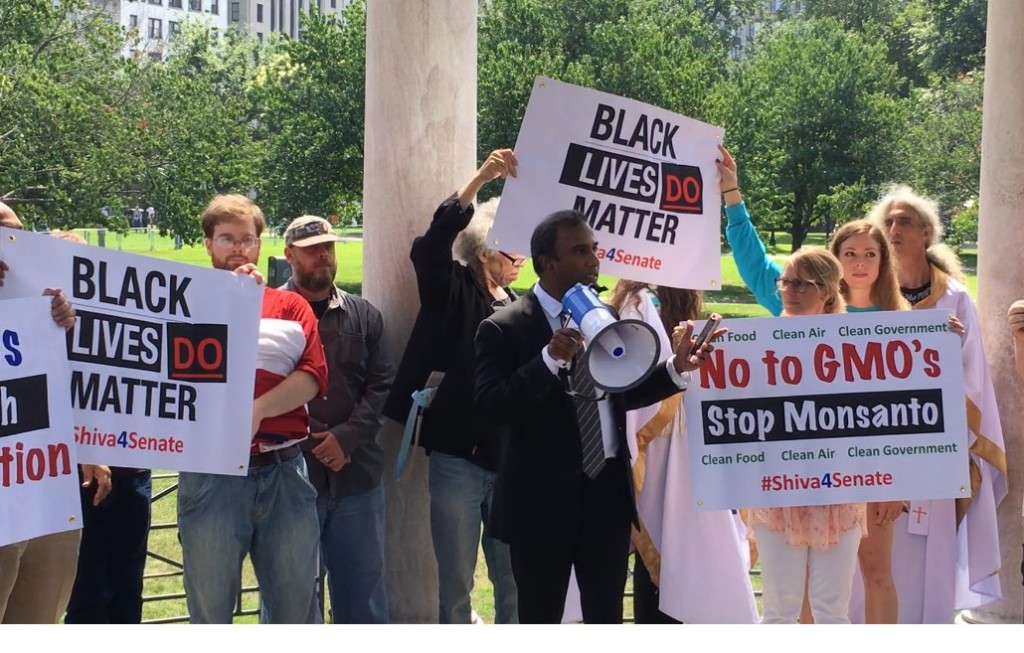 Look hard at that photo above.

Go ahead, don’t just scan it; really look at it. Signs that say Black Lives DO Matter. A very dark skinned man with a bull horn. A protester upset about GMOs (genetically modified food). Another protester with a sign advocating health care and jobs.

The photo is real. We were there.

Several Valley Patriot news spotters volunteered to go to Boston and attend both the rally and the protest, so we could measure what the news media was reporting, compared to what was actually happening on the ground.

What an eye opener.

CNN, CBS, ABC, NBC, MSNBC … they all reported – as a fact – that “protesters” in Boston were there to hold counter demonstration to the “Nazi ,White supremacist rally” on the Boston Common bandstand.

The first tip off that this was utterly false – for those who want to spot this in the future – was that the “reporters” never showed the actual Nazi rally on TV.

They never interviewed the Indian born American citizen who spoke at and organized the Free Speech rally. They never even tried to get the facts of what was being said and what was really being protested.

Instead, the corporate news media – in tandem – orchestrated a news story that wasn’t true in order to incite hysteria about a “Nazi rally” that never took place.

And it worked. Violence is big business in the corporate news industry.

The only way the public can find out the truth is through independently owned local media like The Valley Patriot or WHAV radio in Haverhill.

Not one of them bothered to report the truth. It’s just too easy to report the story that didn’t happen because that story and that narrative were written long before the actual events even took place.

How did this happen? How did America get to a place where the truth doesn’t matter? How did we get to a time when even the local media refuses to simply report the facts?

Even New England Cable News – more respectable than the rest for sure – went out of their way to excuse the violence against police by the left-wing terrorist group ANTIFA.

While NECN viewers in Boston were watching live helicopter footage of masked, left-wing terrorists brandishing weapons and attacking police officers – the NECN “reporter” actually said out loud “We don’t know which side is responsible for attacking police”.

It was like a page out of George Orwell’s novel 1984 where everything is a lie, and history is rewritten while it is happening.

What the Valley Patriot saw – live on the ground in Boston – was a hoax perpetrated on the news media by a very clever man named Dr. Shiva Ayyadurai. He perpetuated this hoax to prove a point. The point is that the truth doesn’t matter, and the news is no longer news.

Dr. Shiva knew that if he pulled a permit and called it a free speech rally, the left wing terrorists and their apologists in the news media would be triggered.

He knew reporters would never seek the real facts, so he went out and proved it. He knew they would whip up hysteria, and make a ton of money covering the conflict they alone created. And he proved that too.

When the rally was over – and while the so called “anti-Nazi protesters” were still attacking police and committing violence on the streets of Boston – Shiva posted the video of his “Free Speech Rally” on YouTube.

The news media purposely ignored it.

Not one Nazi flag. Not one white supremacist. Not one Hitler salute. Not even a slightly conservative political message.

The only people causing civil unrest and committing violence in Boston on August 19th were the people pretending to be against hate and violence. The news media told you – not only a different story – but the opposite of what really happened.

You can now count yourself among the very few people on this planet who know the truth about what happened in Boston.

If only it mattered.

News Media Cover Up – The Nazi Rally in Boston Never Happened added by Tom Duggan on September 22, 2017
View all posts by Tom Duggan →