By ValleyPatriot on September 25, 2013Comments Off on NH’s voter ID Requirement Must be Protected from Baseless Attacks 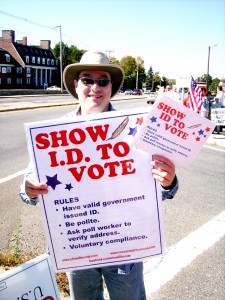 A vote is the ultimate equalizer in American politics. The idea that every citizen, regardless of race, gender or background, is awarded the same power of choice and influence in the voting booth has been the backbone of the American electoral system.

This has been predicated by the simple concept of “one person, one vote.” Yet for decades, New Hampshire had no tangible way of ensuring this basic concept against fraud.

Voter fraud has, and will continue to be, a very unfortunate and well-documented tarnish throughout American history. To witness some of these cases, one doesn’t have to go too far; just take a look at the most recent presidential election season.

During the New Hampshire primary, our current law allowed for the “dead” to be offered numerous ballots throughout the state. Although Project Veritas and James O’Keefe did not actually vote in the election, they certainly helped to show what was a glaring hole inside our election law. Anyone off the street could read the last week’s obituaries and then go to the polls armed with another name to vote under.

This trend then continued when it was recently reported that more than 950 ballots cast in South Carolina’s presidential primary were also from the “nonliving.” In Florida, a local TV station compared jury excusals due to not being a citizen with the registered voter list in two counties. They were shocked to find that nearly 100 voters in these counties had not only voted, but have been doing so for multiple years.

In an election season where just a few votes decided the winner of the Iowa caucus, now more than ever it’s important to realize that voter fraud is indeed real, to ignore this problem any longer is a disservice to the voters.

It was for those reasons that the New Hampshire legislature finally passed a voter ID requirement in 2012, overriding the veto of then-Governor John Lynch.

Opponents of voter ID seek to associate the disgusting claims of “Jim Crow” against supporters in an effort to sway public opinion to repeal the law. These claims are based on the baffling logic that voters are unable to do the same action that is required to drive, cash a check, rent an apartment, purchase alcohol or cigarettes, or even apply for welfare and food stamps.

With this train of thought, it would seem that some want the public to believe that asking for a picture ID to enter an R-rated movie also somehow leads to minority disenfranchisement. Not only is this argument wholly unjust, but it is downright offensive.

Fortunately, these claims held little water for the Democratic-controlled Legislature of Rhode Island. In 2010, the Democratic majority passed its own voter ID law, while state Rep. Jon Brien, a Democratic sponsor, called it “good government.” Rhode Island joined 30 other states that require some form of ID to vote, 15 of which require a photo ID.

Polling and research also has not done the opponents of voter ID too many favors. Recent polling has shown that nearly 75 percent of Americans support showing photo ID at the polls, along with other polling that has shown that voter ID is very popular within the Hispanic community.

Research complied from multiple states from 2000 to 2006 by the University of Delaware and the University of Nebraska has also concluded that voter ID does not negatively affect turnout. The study went on to state that “concerns about voter-identification laws affecting turnout are much ado about nothing.”

It seems the real tragedy here has been that far left liberals have tried to cajole this issue into partisan terms. With the public against them and their own Democratic colleagues against them, all the far left has is race baiting and fear-mongering.

Instead of voter ID being about the end of double voting, voting in more than one state, and impersonation fraud, it has become about supporters defending themselves against baseless attacks of racism. Perhaps if the opponents of voter ID cared as much about the equality of every vote as they do the voting dead, we wouldn’t have this problem.

Voters in New Hampshire currently have a voter ID requirement that is working and ensures ethical elections. Legislators must remain vigilant against efforts by Governor Maggie Hassan or other liberals to weaken or repeal it.

* Authors note: In full disclosure, sections of this column were previously used in other writings by this author.