By ValleyPatriot on October 5, 2005Comments Off on No Love, No Power for Mayoral Candidate

A moment of clarity.

After all is said and done that is what election results, whether a primary or final, provides to those seeking public office and to the people who support them. Some candidates grow under that light and some crumble. This past primary night in Lawrence was no different with voters sending a clear message about their choice to lead the city.

The Mayor’s race had provided moments of intrigue and speculation since the night Marcos Devers made this the longest Mayor’s race in Lawrence history by an-nouncing his candidacy four years ago; the very night Michael Sullivan was finding out that voters had elected him to his first term as Mayor. With fours years to prepare, fund-raise, network and with a seat as an at-large city councilor for four years, expectations in the Devers camp had to be high.

Unfortunately for Devers, critical mistakes were made every step of the way, from choosing to announce he was running for Mayor before Michael Sullivan had even taken office, to not building a campaign war chest and attacking at one time or another every other elected official in the city from City Councilor Patrick Blanchette to State Representative William Lantigua. His biggest mistakes came after the primary night when he cited the tired old excuse of voting irregularities and then in an interview with the Eagle Tribune renounced his theme of “One City, One Vision,” citing a need to focus on “Latinos.” 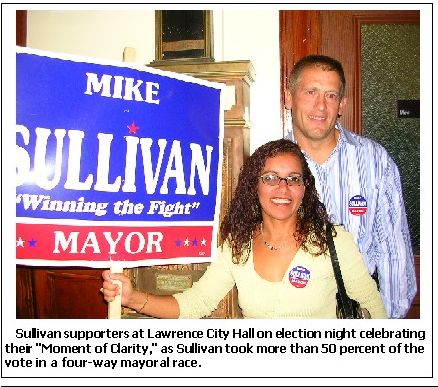 Those words had to be a shock and a slap in the face to the people of Lawrence, regardless of background or racial make-up, who have been trying to move forward in a positive and progress manner.

Instead of following the “One City, One Vision” framework crafted by campaign manager Robert Okoniewski, who resigned to protest the racist direction the Devers’ campaign had taken and later rejoined the campaign after Marcos Devers apologized and promised to run a campaign free of racist attacks, undisciplined members of the Devers campaign began stirring the racial pot two weeks before the primary.

The most public of which was Devers? insider Alferdo Cruz unleashing on the radio a hatred-filled racial attack against Prospect Hill City Councilor Patrick Blanchette two weeks before the primary. Not surprisingly the clarity provided by the voting public was swift as Devers did not do as well as expected in District A, where Devers lives, but where Blanchette is also the incumbent City Councilor.

In contrast to Devers, Mayor Sullivan focused on the issues that effect people daily, from combating crime to drawing in private investments from business leaders. Sure there have been bumps in the road and things I am sure Mayor Sullivan would do differently with 20/20 hindsight, but with multiple construction projects, police and fire departments that are publicly supporting him and his honest desire to reach out to all people in Lawrence, Mayor Sullivan had a strong message to share with the public.

In the post September 11th world, people want stability, directness and accomplishments from their elected leaders. The people of Lawrence share the same dreams and desires to improve their lives. What people do not want are empty slogans or campaign promises that change with the wind. People in Lawrence and everywhere else from Baghdad to New Orleans want leaders with vision and dedication to improving society. Action, not empty words are what is expected and demanded by the public. Post 9/11, people are not going to change elected officials unless they see weak leadership from an incumbent and a strong, viable alternative in the person opposing the incumbent.

On Tuesday, September 27th, the voters of Lawrence, of all races and backgrounds, voted for Mayor Sullivan because of his steady leadership and message of hope.

Some would call that a moment of clarity.

Michael R. Sweeney is a former member of the Lawrence School Committee, a former city councilor in Lawrence and is currently an attorney. He is also the founder of the annual Michael R. Sweeney Regatta. To send your comments or questions to Mr. Sweeney, you can email him at esqsweeney@aol.com