By ValleyPatriot on February 10, 2014Comments Off on No More State Secrets, We Demand Transparency! – VALLEY PATRIOT EDITORIAL – FEBRUARY, 2014 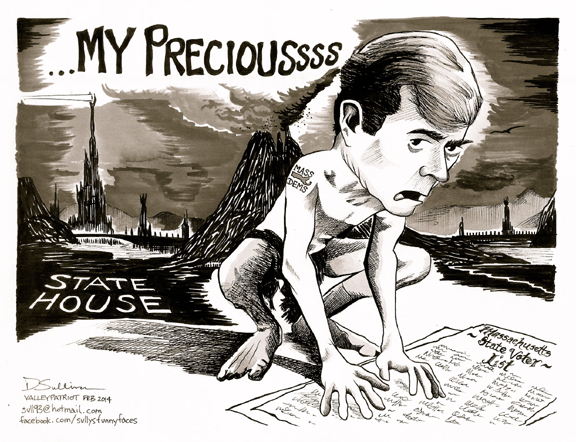 Welcome to People’s Republic of Massachusetts.

Last month the Valley Patriot contacted the Secretary of State’s Office in search of the statewide voting list.

The list is a compilation of the voting lists of each city and town in Massachusetts and is in the hands of Secretary of State Bill Galvin’s office.

Each city and town voting list is a public document. After all, they are public voters, registering to vote in public elections of public candidates who will represent the public.

To our amazement, however, we were told by Bill Galvin’s office that the list of voters in Massachusetts is not a public document and the Secretary of State’s Office was not going to turn over the list, not even to a newspaper like The Valley Patriot.

How can this be?

How is it even possible that a voting list of any kind would be considered a “secret document” and not accessible to the public?

We challenged the Secretary of State’s Office asking how any voting list of any kind could possibly be deemed “not a public document.”

In response they emailed us a copy of Massachusetts General Law, Chapter 51, Section 47C, which states:

“Subject to appropriation, the state secretary shall maintain a central registry of voters which shall contain, if provided by the registrars, the names, addresses and effective dates of registration of all registered voters in the commonwealth …. The names and addresses contained in said central registry shall not be a matter of public record…”

Just imagine a one party state run entirely by Democrats who run around at election time talking about transparency in government, only to have those same Democrats declare with a vote that the public’s statewide voting list is a “secret document” and that members of the public are not allowed access to it?

What’s more, the law does allow the Secretary of Sate to turn over the voting list to statewide candidates for public office and ballot question organizations. But, those who receive the list must sign a promise confidentiality under pains and penalties of perjury.

In other words, anyone who has the list and shares it with the public can be prosecuted.

This is a disgrace.

There is never any legitimate reason to conceal any voting list of any kind. These documents were produced with taxpayer dollars. The list was compiled for public elections. And the list is maintained by public officials who conceal the list using public resources.

In the mean time, The Valley Patriot is looking for anyone who can “leak” the statewide voting list to our editor so that we can publish the list on-line for everyone to see as an act of civil disobedience against an unjust and unconstitutional state law.

Valley Patriot publisher Tom Duggan has given his assurance that he is willing to go to jail to protect the identity of whomever shares their statewide voting list with this newspaper if state officials take action against us for publishing the super secreat statewide voting list.

We cannot imagine what excuse could have been used to declare a statewide voting list a secret document. And we promise to our readers that The Valley Patriot will fully research this law to find out who authored it as well as the legislators who voted in favor of this tyrannical law that strips the voters of their constitutional rights.

We also promise to report back to our readers exactly who those legislators are.