By ValleyPatriot on October 30, 2016Comments Off on No One Is Too Big To Jail ~ FROM ISRAEL TO THE VALLEY PATRIOT, with Forest Rain 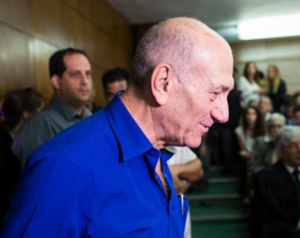 At the same time, this event marked Israel with a badge of honor. The Nation has decided that corruption will not be tolerated and that no one is too big to jail. Bribery and obstruction of justice (for which Olmert was convicted) are not tolerated. Embezzlement and sexual misconduct (for which other Israeli politicians have been prosecuted) are not tolerated.

The laws of the land are to be upheld equally for all citizens. People who have titles are not excused from responsibility, quite the opposite, those who were elected to office need to be held to higher standards than those set for the general population. We expect more of our leaders, not less.

It is terrible that so many people abuse power. They are an embarrassment to the standards our society sets for itself. The leaders of the Nation are a reflection of the people who voted for them and that is why corrupt officials are not something the Israeli people will tolerate. Those are not the values we uphold, that is not who we are thus, they cannot represent us.

Justice must be equal to all citizens otherwise there is no justice at all. And no one, no matter what position they held or what family they belong to, is too big to jail.

Forest Rain was born in Detroit and ‘made aliyah’, immigrated with her family to Israel at the age of thirteen. She is a Marketing Communications and Branding expert – writing for hi-tech companies for a living and Israel for the soul. About herself she says: “I was raised on American ideals and found them not in my birth country but in my homeland – Israel, the land of my heart.” To contact Forest Rain on Twitter: @frisrael or Facebook: @InspirationFromZion. Inspiration from Zion: http://forestrain.wordpress.com/