By ValleyPatriot on January 6, 2009Comments Off on North Andover Family caught in Mumbai, India terrorist attacks 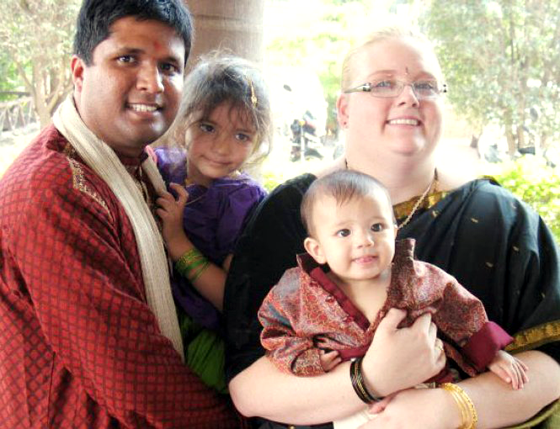 Editors note: The following is a first hand account of North Andover resident Erin Mary Ackerman (and her family) who went to Mumbai, India last month just as the terrorist attack began which resulted in the deaths of 179 people.

Heading to India the day before Thanksgiving this year, I assumed I knew what I was in for. I was a veteran traveler; marrying a man from thousands of miles away assured me of that. I was off to India for a three-week vacation to see family and friends, and do some shopping. I was neither nervous nor concerned about India as a political entity, I was only hoping the rupee stayed low versus the dollar. I was bringing with me a four year old, a seven month old, and the aforementioned Indian husband, courtesy of Northwest Airlines. Despite the arduous 26-hour journey, we were excited and ready for the trip that lay ahead.

We had decided on our trip at the last minute. We were unable to get the direct flight from Amsterdam to Hyderabad that is very easy on the traveler with 2 children and 8 suitcases. We had to take a 6-hour layover in Mumbai, the bustling Indian financial capital formerly known as Bombay. This would afford us the time to meet and have dinner with friends and a friend-of-friends, as is the Indian custom.

I was thrilled to be heading out into Mumbai for a quick “look see.”

The flight landed at 10:00pm on November 26, 2008 at the international side of the Mumbai airport. The heat of the city was immediate and close. And nothing smells like India. The second the wheels touch the runway, the smells is with you like a second skin and doesn’t leave you until all your clothes are washed a week after your return home.

Usually when you land in India you are greeted by blue shirted porters who beg, wheedle, and cajole you to pay them 2 dollars to manage your luggage. As we entered the terminal I was glad to see that they had finally curtailed the porters’ onslaught to the baggage claim…how wrong about that I was.

We cleared customs with nary a second glance, as is my luck in India. Having two squealing children attached to me at all times helps, I suppose. We found our way to the baggage carousel and our eyes were immediately caught by the large televisions all tuned to the same nonairport information news channels. The headlines read: Mumbai under attack. I had flown into India’s 9/11, and had no idea where to go, who to turn to, or what could happen next.

Television in India is graphic and immediate. No thought of censoring for younger viewers or those of us with American sensibilities. We were being hammered with pictures of gunshot victims, and smashed with headlines of “Foreigners being targeted at Mumbai Hotels.” I literally felt my knees wobbling.

I was starting to sweat. I kept telling my husband “we need to get out of here.” He was worried, to be sure, but fought to bravely keep the strong face of husband, father, and protector. He called our friends. They were not coming out tonight. We should stay put.

A bomb blast went off just outside the airport. It was reported on the news channel with corresponding pictures of bleeding victims, wailing into the night for help that comes very slowly in India. There is no 911 to call for an ambulance.

The news came over the omnipresent TV screens that the head of the country’s counter terrorism task force was himself shot in the first wave of this attack. So the chief anti-terror agent for the entire nation was dead, and I was stuck in the airport, a probable target of attack, with my sleepy children and stalwart husband. The panic was starting to set in.

Eventually, our luggage came, and all the porters were too busy staring at the flashing screens to assist us. Finally we found one who was seemingly unconcerned with the chaos around us and he gathered up all our belongings.

My husband was determined to push onward with our travel plans, while I wanted to hop back on the first international departure. Doha, Quatar was the next flight out. We chose to stay in Mumbai for the time being. We had to transfer our bags and selves to the domestic side of the airport via bus.

We got on a bus jam packed full on Indian travelers and each and every one gave me a look of what can only be described as pity. The silence on the bus ride to the domestic terminal stood in stark contrast to everything I had experienced previously in India. The people are noisy, joyful, full of chatter and talk even at the wee hours. This ride across the runways felt much more like a funeral dirge than the continuation of a tourist visit.

The domestic side of the airport, much like Logan, was full of nighttime construction. Every time I heard a hammer I was jumping out of my skin. We came inside from the bus stop and crossed the floor to the open seating, towards the wary looks of our fellow travelers. Out of nowhere a mustached and uniformed man appeared. “No! Madam! You must not wait with the other passengers!” I was a target in my foreignness and no one wanted me to be near them. “Madam, please, come with me!” We started to go with him.

They had started separating the foreigners from the Indians within the airport. The fear was that if a foreigner was spotted in the general waiting area, a terrorist would open fire at those around. I was not welcome to sit near the gate. “Madam, come, please!” I was being ordered away from my husband and Indian looking children. My children’s American passports were burning my hand. One of the TVs flashed a report that the terrorists were asking to see passports and shooting the foreigners. I handed a sleeping baby over to my husband, hugged my four year old in a way that she couldn’t see my face and left with the agent.

I was brought to the first class waiting lounge of Kingfisher Airlines. It was beautifully appointed with red leather couches,  televisions, a phone charging station, and staffed with a full time waitress. But I was alone, without my children. Looking around, I saw white faces looking back at me. I was in seclusion with Australians, Danes, a man whose house was next to the Taj Hotel, and some Brazilians. The panic and fear was etched on all our faces, but my immediate concern was my children.

Thinking about them dissolved me into tears again and again, though I believed them to be safer with their father, away from me.

For two hours I sat with my eyes glued to the TV watching reports of dead foreiners roll in. I heard hostages within the Taj make phone calls to the media. I finally saw the Indian Commandos really take charge of the airport. The green camouflage and guns gave me the courage I needed to rush out of the lounge and find my husband and children, sleeping peacefully on the floor near the gate. I gathered them up and smelled them. I hugged them. I cried.

All of us were allowed to stay in the lounge until our flight the next day.

Though much delayed, and nearly empty, our plane took off at lunchtime, and we were sitting in my husband’s aunt’s house in the early afternoon. Our trip was spoiled, our itinerary shot, as the Consulate was advising Americans to lay low. We reached home on December 14th to news of a horrid ice storm, which flooded our basement and blew out power. I have never been so excited to see a wet soggy basement in my life.

I survived India’s 9/11, survived the physical and emotional? pain of being separated from my children, and have come out the other side. In the next days of my trip I joined with people across India as we did with NYC after September 11. The refrain: “Standing Up to Terrorism: