By Tom Duggan on February 28, 2017Comments Off on North Andover Police Officers, Firefighter of the Year

Last month, The Exchange Club held their annual award dinner at the Double Tree Hotel in Andover. These are the winners and their stories. 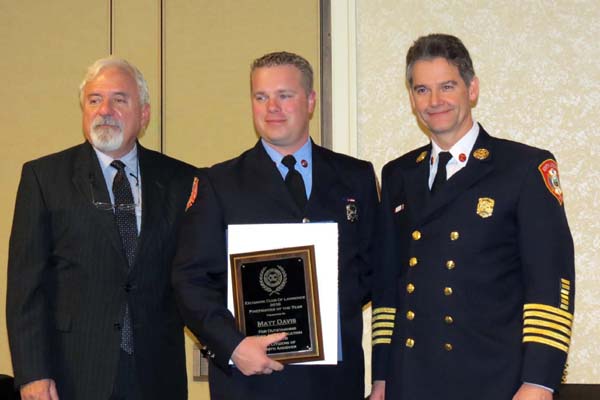 NORTH ANDOVER FIREFIGHTER OF THE YEAR

Matt began the North Andover Firefighter’s Holiday Toy Drive seven years ago in 2009. The drive has provided for over 200 local families which include families from North Andover Veteran’s Services and Department of Social Services in Lawrence, Methuen and Lowell.

In 2012 he started the “NAFD Fight for a Cure” for breast cancer. The fund has raised over $750 to date and is donated to Lowell General Hospital Cancer Center where his sister Meghan was treated in 2009. The North Andover Firefighters now wear the pink shirts on duty during the month of October.

He has worked with the North Andover Firefighter’s Local 2035 scholarship committee since it began in 2009. Matt took over as head of the committee in 2016. The committee has provided dozens of scholarships since 2009 to local students looking to continue their study in Fire Science, Nursing or the medical field.

Matt is the head of the North Andover Fire Department Honor Guard, since 2007. He was able to acquire a donation in excess of $7,000 in 2015 to pay for 8 new custom honor guard uniforms and equipment. The honor guard has presented colors at many local events including Lowell Spinners, UMASS Lowell hockey and the Boston Red Sox. More importantly, Matt makes sure that all retired N. A. firefighters’ wakes and funerals are covered with the honor guard.

Since 2010, Matt has put together the annual 9-11-01 Ceremony for the town, which is attended by citizens, veterans, town officials, and members of both the NAFD and NAPD.

Finally, Matt is the department’s Life Safety Educator. Matt is responsible for public education in the schools through the Department of Fire Services Student Awareness of Fire Education (SAFE), and the Senior SAFE program for the elderly citizens. Matt organizes both the annual fire prevention open house and coordinates with the NAPD for “National Night Out” event.

“It is with great pride that I announce the 2016 North Andover Police Department Officers of the year, Lt. Daniel Lanen, Officer Daniel Quinlan, Officer Robert Hillner, Officer Jarrad Lawlor, Detective Michael Reardon, and Detective Matthew Zahoruiko for their actions on December 21, 2016. On that day Detectives Reardon and Zahoruiko were observing a suspicious subject in a vehicle on Mass Ave. Upon approaching and engaging the subject both detectives observed items in plain view that suggested the subject was involved in illegal narcotic activity.

Upon further investigation, the subject rolled up the window and put the vehicle in drive and attempted to flee from the detectives. Detective Zahoruiko was nearly run over as the subject fled out of the parking lot while Detective Reardon jumped out of the way. Officer Quinlan was in the immediate vicinity and began to canvass for the suspect vehicle. Officer Quinlan quickly located the vehicle and a pursuit was initiated which led onto the onramp to route 495 North where Officer Lawlor joined in. Officer Hillner and Lt. Lanen were on Sutton Street onramp to 495 North and as Officer Quinlan called out the pursuit, Officer Hillner, Officer Lawlor and Lt. Lanen began a rolling road block. The subject repeatedly tried to evade capture by aggressive driving and clearly had no intentions of stopping. As the pursuit continued, Officers were able to successfully stop the vehicle on the lower deck of 495 right before the split onto Commonwealth Drive. Lt. Lanen, Officer Hillner, and Officer Quinlan and Officer Lawlor drew their weapons and after a brief struggle, placed the subject in custody.

At the scene, Detectives Reardon and Zahoruiko located a significant amount of narcotics inside the vehicle. The actions of these officers resulted in no injuries to officers or the public, narcotics being taken off the street, and the arrest of a potentially violent offender who had no regard for the officers’ safety or the safety of the public as clearly evident by his actions. Please join me in congratulating these officers on a job well done.”