By TraceyZysk on January 17, 2014Comments Off on “North Andover’s Finest” K-9 Kyzer Passes Away 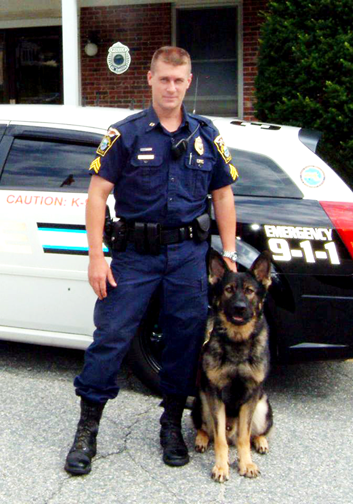 On December 30, 2013 I received a call from Lt. Gray of the North Andover Police dept. Lt. Gray went on to tell me that retired K-9 Kyzer had passed away. Shocked, I took a second before responding, took a deep breath and wiped the tears from my eyes. This was a call I knew eventually would happen but a call I hoped I wouldn’t receive for a long time.

Kyzer served North Andover for 6 1/2 years with his handler and partner then Sgt. Chuck Gray.

“He was a great dog,” Gray stated. “He handled any situation unbelievably well.”

Nearly ten years ago Kyzer and Lt. Chuck Gray were paired together after Gray’s first dog Eiko passed away from injuries he received while chasing a robbery suspect.

Not only did Kyzer search for missing people, hidden suspects or articles, help find evidence of a crime, and locate narcotics, he also assisted in the arrest and apprehension of felons and helped protect the public from serious injury. Kyzer was also quite the crowd pleaser and attended all town events. He would also visit students at the North Andover schools.

Kyzer’s claim to fame, locally and nationally was on Nov. 14, 2007. He accompanied his handler, Lt. Gray, when a call came in for a shooting at Independent Tire located next to the Lawrence municipal airport in North Andover. They arrived on the scene of a serial shooting situation. When Lt. Gray released the leash, Kyzer put his training into action – biting the shooter’s arm and knocking the gun away. Fortunately, Kyzer was 100 percent on and did exactly what he was trained to do. At that moment, although he did “his job”, doing his job accurately saved the community of North Andover from a heartbreaking tragedy.

Kyzer became a role model in the K-9 community and a legend in North Andover. Even winning a National Working Dog Hero award. Since 2007, Kyzer had faced a few more challenges, including having his stomach twist and stapled on two separate occasions. Both times he made full recoveries and immediately returned to work.

Kyzer unofficially retired in 2012, when Gray was promoted to Lieutenant. This was a very difficult decision for Gray, however when officers are promoted out of patrol they tend not to have K-9’s.

But anyone that ever met Kyzer, knew he was an extremely driven and passionate officer, and he would never officially retire. If there was an opportunity for Gray to use Kyzer he would. But he spent most of his retirement at home with Gray, his wife Melissa, their three boys and their two pet Labrador retrievers.

I am pleased and honored to have known Officer Kyzer. My very first article I wrote for the Valley Patriot was after an interview I did with Lt. Gray and Officer Brush about the NAPD/ATF K-9 unit: Kyzer and Iris.

Appropriately, my article from 2010 was titled “North Andover’s Finest”

Good Job, Well Done Kyzer, and now you are free to cross the rainbow bridge and play all day with Iris and Eiko.

Tracey Zysk, owner of Wiggles & Jiggles Pet Care in North Andover MA is a local pet care professional. She has been featured on local radio, tv and newspapers educating the general public on animal care and animal health & wellness. Tracey is a proud supporter of Police, Fire & Military K9 units. Tracey may be reached at wigglewalk@comcast.net. Become a fan on facebook at Wiggles & Jiggles Pet Care.