By ValleyPatriot on October 3, 2020Comments Off on Nun Rocks RNC ~ BENEATH THE SURFACE with PAUL MURANO 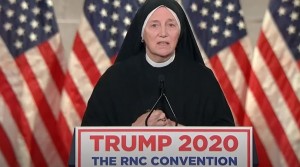 A Catholic nun stole the show at the Republican National Convention (RNC) last month. The Devil lost a huge battle in his efforts to stifle the truth about life.

To truth-lovers, the words of Sr. Deirdre Byrne were music to their ears Wednesday. For those hiding from the truth, it was like nails on a chalkboard.

“I must confess,” Byrne started out, “that I recently prayed while in chapel, begging God to allow me to be a voice, an instrument for human life. And now here I am, speaking at the Republican National Convention. I guess you’d better be careful what you pray for.”

Among all the dignitaries speaking at the RNC this year, Byrne may possess the most interesting, if not unique, resume of all. Before becoming a religious sister, she served for 29 years as a medical doctor and surgeon. She is also a retired colonel of the U.S. Army, where she served seven years as a full-time officer.

But that’s not all. Byrne was serving as a missionary while completing a second residency when she met Mother Teresa of Calcutta.

“My journey to religious life was not a traditional route, if there is such a thing,” Byrne informed the audience.
She practiced medical surgery among the poor, from Afghanistan to Egypt’s Sinai Peninsula. After attending the “Salute to America” at the Lincoln Memorial July 4, where the president honored the service of those who make America better, Byrne told the National Catholic Register, “I am a general surgeon. I do free surgery for the poor and refugees.”

Articulating beautifully and powerfully Wednesday night, Byrne shared her firsthand experience with the world’s most vulnerable:

I can speak about my experience working for those fleeing war-torn and impoverished countries all around the world. Those refugees all share a common experience. They have all been marginalized, viewed as insignificant, powerless and voiceless. And while we tend to think of the marginalized as living beyond our borders, the truth is the largest marginalized group in the world can be found here in the United States. They are the unborn.

That last sentence may have knocked more than a few Americans off their comfortable recliners. When people are hiding from truth, i.e. hiding from God as did Adam and Eve in Genesis 3:8, it can be a little jolting.

Byrne entered formation with the Little Workers of the Sacred Hearts of Jesus and Mary in 2002 and professed her first vows in 2004. Speaking of the infancy narratives in the Gospel of Luke — the realities found in the second and third joyful mysteries of the Rosary — Byrne shared with her national audience important insight about being poor.
“As Christians,” she said, “we first met Jesus as a stirring embryo in the womb of an unwed mother and saw him born nine months later in the poverty of the cave.”

Byrne is board certified in family medicine and general surgery. She has earned the title of fellow in the American College of Surgeons. Besides having impressive credentials, she knows there is nothing more important than to follow Christ by defending the vulnerable — despite the consequences:

It is no coincidence that Jesus stood up for what was just and was ultimately crucified because what He said was not politically correct or fashionable. As followers of Christ, we are called to stand up for life against the politically correct or fashionable of today. We must fight against a legislative agenda that supports and even celebrates destroying life in the womb.

What a difference from Sr. Simone Campbell, who spoke at the Democrat convention. Campbell neither looked like nor sounded like a Catholic religious sister. While Byrne laid down unequivocally our moral obligation to the innocent unborn in the midst of today’s ongoing abortion slaughter, Campbell told us that the moral question surrounding legal abortion was above her pay grade.

The co1mparison is emblematic of the deep moral and philosophical difference between the political parties today: One party seeks anti-Catholic Catholics to obscure the truth while the other chooses real Catholics to convey the message. It is also worth noting that talking heads in the Luciferian fake news media hardly mentioned Byrne’s talk. It’s as if ignoring the truth will make it go away.

Byrne dropped yet another truth bomb by mixing her Catholic faith with her knowledge of medical science.
“We must ask ourselves what we are saying when we go into a womb and snuff out an innocent, powerless, voiceless life. As a physician, I can say without hesitation: Life begins at conception,” said the nun.

Knowing the volatile reaction she would get, Byrne assured people she speaks only out of love. Perhaps a few priests and bishops should take note: “While what I have to say may be difficult for some to hear, I am saying it because I am not just pro-life, I am pro-eternal life. I want all of us to end up in Heaven together someday.”

Then came her political message. Voting is a moral act, and Byrne wants everyone to have a properly formed conscience:

Donald Trump is the most pro-life president this nation has ever had, defending life at all stages. His belief in the sanctity of life transcends politics. President Trump will stand up against Biden-Harris, who are the most anti-life presidential ticket ever, even supporting the horrors of late-term abortion and infanticide.

Sr. Byrne concluded her glorious talk by imploring us to take up our spiritual weapons for the election and pray that God blesses our nation.

“Because of his courage and conviction, President Trump has earned the support of America’s pro-life community,” the sister lauded. “You’ll find us here with our weapon of choice, the Rosary. Thank you, Mr. President, we are all praying for you.”

Originally published in Church Militant. Paul is the host of Beneath the Surface video and radio podcasts, teaches college philosophy & theology, is a staff writer/producer for Church Militant, as well as a singer-songwriter-musician. See his YouTube page or his personal website at Paulmurano.com. E-mail Paul at PJDM@aol.com ◊