By Christine Morabito on September 16, 2011Comments Off on Obamacare: Lies and the Lying Liars Who Told Them (Part 2) 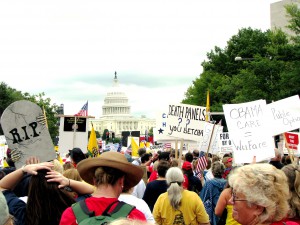 The Patient Protection and Affordable Care Act is the greatest swindle ever imposed on the American people. The very mandate that President Obama vigorously campaigned against when Hilary Clinton proposed it, became his prized piece of legislation, made possible, in part, by following lies:

LIE: THE UK AND CANADA HAVE SUPERIOR HEALTH CARE.

By design, Canada’s single-payer system has 4.1 million people lacking a family doctor, meaning they are insured in name only. In the early 90s the geniuses in the Canadian government decided to lower medical costs by reducing the number of doctors. They got their wish when about 10,000 doctors fled the country. When Canadians are fortunate enough to book an appointment or to obtain approval from a board of bureaucrats to receive cancer treatment, the care is “free.” All this freedom is paid for with their 45 percent income tax and 12 percent (average) sales tax.

Dr. Anne Doig, president of the Canadian Medical Association admitted Canada’s system is “imploding” and in serious need of reform. Even the Canadian Supreme Court acknowledged that socialized medicine forces patients to wait for care and violates their human rights.

In a half-witted attempt to reduce emergency room wait times, the UK mandated that patients be seen within four hours. Since the clock does not start until they walk through the door, the patients now wait outside in parked ambulances. Problem solved.

Although Americans spend more on health care, we are 65 percent more likely to survive cancer 5 years after diagnosis compared to 46 percent in England and 42 percent in Canada. The U.S. has roughly 71 MRI scanners per million people compared to only 18 in Canada.

Like many foreign politicians, former Italian Prime Minister Silvio Berlusconi opted out of his country’s free health care and had his heart surgery in the country responsible for 50 percent of all medical innovations. Berlusconi had his procedure in Cleveland, Ohio.

Switzerland, praised by the left for having superb health care, charges citizens about 32 percent in out of pocket costs while Americans pay only 15 percent.

Analysts have determined that Greece requires 5,000 primary care physicians to care for its citizens. Too bad they only have about 600. Things have gotten so bad that people are bribing doctors to get appointments. Isn’t socialized medicine fantastic?

Most Americans just accepted that number. Why would the government lie? Because it’s not about providing affordable health care, it’s about control. Why else would they harass Dr. John Muney, a physician who began offering unlimited doctor visits for only $79 a month? The state of New York would have none of it. When they failed to discourage him, they forced him to charge more and cover less.

A breakdown of the uninsured figure reveals some gross exaggerations. Of this 46 million, approximately 18 million make between $50,000 and $75,000 a year. Clearly, these people can afford to be insured but choose not to.

I once worked for a woman who claimed she could not afford insurance. She earned three times my salary, drove a sporty new car, went tanning several times a week and had perfectly manicured nails. In Glenn Beck’s book “Arguing with Idiots” he illustrates the idiocy of universal health care: “When you give “free” insurance to someone who can afford it, but who instead chooses to spend their money on other things you are in effect paying for those other things.”

14 million Americans qualify for free health care; they just never applied for it. Another 10 million uninsured are illegal aliens.

It is important to note that more than 50 percent of the total uninsured are not chronically so, meaning they are merely between jobs or only uninsured for part of the year.

Five days before Obamacare was made law, the Congressional Budget Office sent a letter to Nancy Pelosi estimating that despite the new legislation, 23 million Americans would still be uninsured by 2019. So, let’s review: Obamacare promised to insure 34 million previously uninsured; knowing full well that nine years after demolishing our vastly superior health care delivery system, 2/3 of the uninsured will remain uninsured. Only the Obama administration could consider that success.

The left is telling outright lies about Republicans wanting to gut Medicare, never mentioning that Obamacare cuts $575 billion from the program over the next decade. Medicare’s chief actuary admits that 50 percent of seniors will lose their Medicare Advantage benefit when the plan is implemented. It also forces cuts to hospital and home health services and restricts when seniors can have MRIs and CT scans.

Bypassing Senate approval, Obama appointed the radical Donald Berwick to head Centers for Medicare and Medicaid Services and implement “cost effectiveness studies.” Berwick admitted “The decision is not whether or not we will ration care. The decision is whether we will ration with our eyes open.” He is an admirer of the European system which withholds potentially life-saving drugs from people because they are deemed too expensive. The system he yearns for makes Italians wait an average of 70 days for a mammogram. While I’m in no great hurry to have my breast compressed to the size of an IHOP buttermilk pancake, I’m able to book such a procedure in a matter of days.

LIE: THIS IS NOT A GOVERNMENT TAKEOVER OF HEALTHCARE.

You be the judge. Obamacare calls for the creation of 159 agencies, boards and commissions who will decide what benefits must be provided, what procedures will be approved and what doctors will be paid. There are even sections of the law referring to “lifestyle behavior modification” (Orwellian for social engineering). The details of this absurd legislation will be left to federal agencies – unaccountable to the voters – including 16,000 new IRS agents to collect the new taxes and ensure your compliance.

The Patient Protection and Affordable Care Act is neither protection nor affordable. The Tea Party will not rest until this cancerous law is snuffed out, smothered, eradicated or whatever else means the same thing.