By ValleyPatriot on June 3, 2017Comments Off on Olivia Newton John ~ IN THE GROOVE WITH CINDY ANNIS 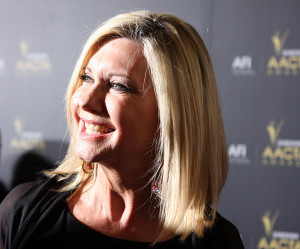 Olivia Newton John was born on September 26, 1948 in Cambridge England to a Welsh mother and German father. She is the youngest in the family, having an older brother and sister. At age five, her family moved to Melbourne Australia where her father taught German and was dean of Ormond College.
At age fifteen, she formed a girl group called Sol Four. The group sang jazz standards at local coffee shops often. Winning a talent show contest on the television show “Sing Sing Sing” launched her music career in London at the young age of fifteen.

Olivia hated being in London, since her friend was in Australia, so several times, she tried to fly back to Australia but was always stopped by her mother who secretly cancelled her daughter’s flights at the airport. Olivia felt better when Pat Carrol reunited with her. The two formed a duo simply called Pat and Carrol. They performed in local bars for very little money. Not all gigs were created equal though. One place the duo performed at was a strip joint. Being unaware of what they were getting into, the duo performed with their clothes on. If it hadn’t been for the flippin visa, Pat wouldn’t have had to go back to Australia and break up the duo. Oh well, Olivia continued to perform live and recorded a few solo singles.

In 1970, Olivia was asked to be in a science fiction musical called Tomorrow. This terrible movie was produced by the man who discovered the Monkees, Don Kirshner, and the co-producer of the old James Bond movies Harry Saltzman.

By 1972, Olivia auditioned, and eventually performed with Cliff Richard and on his television show. Olivia met Richard through her boyfriend Bruce Welch, who was in Cliff Richard’s backup group “The Shadows” They performed the Everly Brothers song “All I Have To Do Is Dream.” The song was released as the B side to “Sunny Honey Girl.” She was on one season of the Cliff Richard show.

After her success on the small screen, Olivia, had a huge cross over hit with “Let Me Be There”. The song hit #7 on the country charts, #3 on the adult contemporary charts, and #6 on the Billboard Hot 100 charts in 1973. This opened the door for many artists.

In 1973, Olivia was offered the role of Sandy, by director Allan Carr in the film version of “Grease.” She was reluctant to take the role since her character was an eighteen-year-old high school girl and in reality, Olivia was almost thirty years old. The actor playing her boyfriend John Travolta was fresh off the big screen with “Saturday Night Fever”. She did a screen test with John who played the role of Danny in the movie. The classic movie came out in the summer of 1978.

After the success of “Grease”, Olivia changed her style of music. In her 1979 album “Totally Hot”, she had a #5 hit with “A Little More Love”.
Soon after, she was given a script for another movie called “Xanadu”. The movie itself sucked, but the soundtrack for the film by Olivia with the Electric Light Orchestra were great.

In 1986, when Olivia had her daughter Chloe, she stopped recording and performing live. Things were about to change in 1992, but as quickly as Olivia made plans, they came down fast like a wall. It was the weekend of the 4th of July when Olivia got the grim news that her father had passed away. She also found out that she had breast cancer. Her eight week, sixteen city concert tour to America was immediately cancelled. After one year of treatment, Olivia was cleared of cancer in 1993.