By ValleyPatriot on November 6, 2021Comments Off on Only Murders in the Building ~ TV TALK with BILL CUSHING 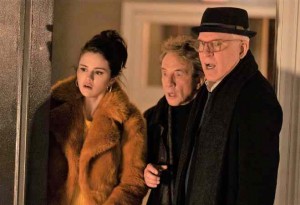 Mystery, intrigue, and lots of laughs are abound in Hulu’s delightful new series ‘Only Murders in the Building.’ Steve Martin, Martin Short, and Selena Gomez star as three neighbors who live in a ritzy apartment building on NY’s Upper West Side and become tangled up in a murder mystery.

Charles (Martin) is an aging actor, and his history as a famed TV detective comes in handy. He hesitantly becomes acquaintances with Oliver (Short), a cash-strapped theater director, when the two are forced to evacuate their building because one of the other residents has been found dead. They meet up with a mysterious and much younger neighbor, Mabel (Gomez), and the three of them bond over dinner and their love of a popular true crime podcast.

They soon find out that the death in their building has been ruled a suicide. Charles, Oliver, and Mabel all have their own reasons for questioning the police’s findings, just as the detective on the case has her reasons for telling them to stay out of it. She’s sick of true-crime obsessed fans trying to turn everything into the case of the moment. That doesn’t stop Charles, Mabel, and Oliver from devising an elaborate plan to not only crack the case but to turn their attempts to do so into a true-crime podcast named ‘Only Murders in the Building.’ It’s a simple premise, but the writers and cast turn it into a clever and addictive comedy-mystery.

Steve Martin and Martin Short are magical together, hilariously hurling insults back and forth throughout the series, and as long-time real-life friends they’re completely in tune with each other’s comedic sensibilities and timing. Selena Gomez is positively charming as Mabel, playing her role with a witty and sarcastic edge. The generation gap between her and her older counterparts is played for plenty of laughs too. Many of the show’s biggest twists lean on what Mabel may or may not be hiding, and Gomez layers multiple meanings in Mabel’s dialogue to keep her neighbors, and us, on their toes.

Even the supporting roles are well-written and cast. Tina Fey as a superstar podcaster the three admire, Nathan Lane as a deli king and sponsor of Oliver’s theatrical ventures, and Sting as…. Sting. Amy Ryan also has a substantial role as a bassoonist who lives in the building and whose practicing makes Charles happy. Da’Vine Joy Randolph is the police detective eventually drawn into the adventure along with us.

The show knows how to balance its quirkiness with some heavy emotional moments. As it progresses and we meet more of the residents, it becomes a rich, complex analysis of all the different people who live under the same roof, and it gives us some of its most important information in silence by presenting a very clever episode entirely without a spoken word until the last seconds.

It also delivers a compelling murder mystery that leaves us with more questions than answers as you make your way from episode to episode, making you want to catch that next episode as soon as possible.

If you have any questions about TV, you can email me at BillsTVTalk@gmail.com. I will answer all your questions and will feature some of the questions I receive in a future Mailbag column.