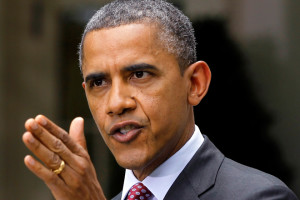 It is sad that President Obama did not see fit recently to travel a mere seventy miles from the White House to Gettysburg to commemorate the 150th anniversary of Lincoln’s famous speech in honor of those who fought and died to end slavery and preserve the union. With the presidential helicopter it would have taken him less than two hours to put in an appearance.

Why did he not attend? There were over forty thousand casualties incurred during the three day battle of Gettysburg. It was the turning point in the Civil war.

The presidential calendar shows that Obama had no significant events on this anniversary to excuse his absence.

Does Obama not understand the importance of the Battle of Gettysburg or Lincoln’s address? Does he not respect the sacrifices of the dead and wounded?

Or does Obama just not want to honor America and acknowledge the fact that over two million Union soldiers – almost ten percent of the Union population – fought to preserve the Union and end slavery? Over 600 thousand Americans died in the Civil War. This equals nearly half of all the deaths suffered by Americans in ALL our wars and more than one and a half times as many as in World War II – two and one half times as many on a percentage basis.

Bret Stephens, in a Wall Street Journal opinion piece, described Obama as callow. Callow is a perfect description of this president. Inexperienced, juvenile, naïve, immature, unsophisticated, and most of all – superficial.

Ignoring one of America’s most meaningful anniversaries — what else could we expect from an ideologically stunted socialist whose grandest achievement was being a community organizer?

But all of this begs the question: How did America ever end up with such an empty suit occupying the White House? Were we mad?

In his book “Extraordinary Popular Delusions and the Madness of Crowds,” Charles MacKay described the tulip mania that occurred in Holland around 1637 in which rare tulip bulbs were bid up to enormous prices and then crashed precipitously. Tulipmania is a good example of crowd psychology embracing irrationality only to be yanked back to a more coherent state of mind.

Obama’s candidacy was tailor made for a bout of national insanity. Americans wanted to believe.

We desperately wanted to see an African-American rise to fill our highest office and erase any remnants of past racial sins. When Obama ran for the presidency, America, with the help of the mainstream media, closed its eyes and bought his spiel about “hope and change” hook, line and sinker.

When Obama was elected, we wanted him to succeed so that Americans of all racial backgrounds could jointly celebrate our land of opportunity and thereby heal the wounds of past racial divisions.

Unfortunately, what we got was a disaster of monumental proportions.

Conservatives and libertarians predicted this disaster. To the extent that Obama’s socialist/fascist policies were put into practice, disasters were inevitable.

Morality aside, and statism is immoral, it just doesn’t work. It is just the nature of things. Failure follows statism just as night follows day.

The U.S. may now be in the initial stages of recovery from Obamamania: the irrational hero worship of a callow fellow with no record of accomplishing anything of value, yet elevated to the presidency of the greatest nation on earth.

Obama the emperor has no clothes. He is an empty suit making believe he has a clue. Obama is a modern day Wizard of Oz pulling levers and blowing smoke in a world he cannot comprehend and a country he despises.

Paraphrasing a column (Obama: The Affirmative Action President) by Matt Patterson, “Historians may regard the election of Barack Obama as a mass hysteria. How did a man so devoid of professional accomplishment convince so many that he could manage the world’s largest economy and direct the world’s most powerful military? Imagine a future historian examining Obama’s pre-presidential life: passed through the Ivy League despite unremarkable grades and test scores; given a non-job as a ‘community organizer’; a state legislator without legislative achievement; and finally an unaccomplished single term in the United States Senate. He had no academic and no legislative accomplishments.”

Obama’s lack of substance and his embrace of an irrational ideology is now exposed for all who are sighted to see. Only the ideologically blinded will continue to pretend that Obama or his ideology have merit.

Hopefully, we won’t have a similar national bout of insanity in 2016 if the Democrats nominate a candidate having a similar level of competence, such as Alfred E. Neuman.