By Tom Duggan on March 26, 2013Comments Off on Parties Unify on Public Records in Massachusetts! 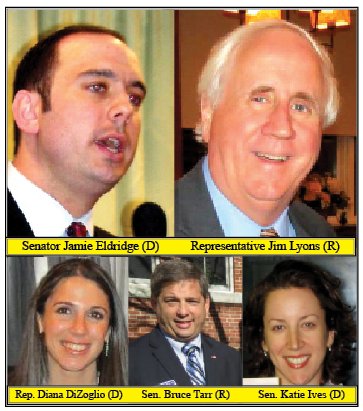 While the Democrat leadership on Beacon Hill has blocked any attempt by Republican Legislators to change the Massachusetts Public Records Law (M.G.L. Ch. 66), a revolt among Democrats has caused a tidal wave to build in both the House and the Senate where rank and file members of both parties are calling for the law to be made more effective.

Massachusetts General Law, Chapter 66 is known as the State’s Public Records Law. It requires all public documents be turned over within ten days of request by any member of the public.

WHEN THE LAW IS VIOLATED

As of the day we went to print, The Valley Patriot is still waiting for public documents from the City of Lawrence regarding payments made by the city to The Law Firm of DiAdamo and DiAdamo.

The DiAdamos’ have a contract with the City of Lawrence representing the city in worker’s compensation claims. They also own the building that the Lawrence School Department rents for their central offices on Essex Street, and have done legal work for the city’s Workforce Investment Board as well as being the attorneys for the Greater Lawrence Sanitary District. The DiAdamo’s also represented Mayor Lantigua and his Economic Development Director Patrick Blanchette on personal matters before the court.

Despite the fact that M.G.L. Ch. 66 mandates public records be turned over within ten days, The Valley Patriot is still waiting for a court resolution to our demand for public documents because there is no penalty in the law for those (like Lantigua) who refuse to comply with it. Secretary of State Bill Galvin’s Office and a court order from Essex Superior Court Judge Thomas Murtagh both compelled Lawrence Mayor Willie Lantigua to release the records, but Lantigua has so far refused with impunity.

“The problem with this law is that when an elected official or a holder of public records simply refuses to comply with the law, like Mayor Lantigua is doing in Lawrence, there is no penalty. All the Secretary of State can do is send them a nasty letter, and as we have seen in the case of The Valley Patriot that doesn’t work,” Jim Lyons said.

“So in affect, we have merely a polite suggestion to public officials to please make public records available, but if they don’t want to, that’s OK. Well that’s not OK! This is madness, these are our documents, our tax money paid to produce them, the information contained in those documents reveal the actions of our government, and the public has the right to know what is in them. How can you have a law with no penalty for breaking it? Only in Massachusetts.”

Lyons is leading the charge in the House, (with his party right behind him) calling for the highest penalties for public records law violations: jail time for repeat offenders.

Massachusetts Senate, Minority Leader Bruce Tarr, (R) Gloucester, says that he has been fighting for years to get transparency in the state’s public records law, but to no avail. Tarr says he is committed to getting the law changed and also said he is more hopeful that changes are coming.

“I know we are going to try and find meaningful penalties so that the folks that are withholding information pay a consequence for violating the law, and doing what appears to be a flagrant disregard for the law. That is not acceptable. If the law is going to have integrity it has to be enforceable and it has to respected,” the Senator added.

Republican House Minority Leader, Brad Jones said he agrees with Senator Tarr and supports changes in the law as well. “Having been a local official, I think there are a lot of ways in approaching whether it’s a fine on the person who is specifically standing in the way of getting those records out. Particularly when it has already been indicated the people are entitled to those records.”

“I think Bruce [Tarr] is right, one of the things we are very fond of in the legislature is passing more laws. But often times, we have laws on the books that we are not taking advantage of and putting teeth behind to get the results we desire.”

“So, I think you have a commitment, from me … to look at this and try to come up with greater ways to putting more teeth [into the law], and quite frankly giving more tools to the people in charge of enforcing the law.”

Republican Representative Brad Hill (Ipswich) said that some legislators have tried to discuss adding penalties for violations of the state’s public records law, but the Democrat Leadership in the House wouldn’t even let them speak on it.

“I [said] in my comments [previously] that we need more transparency and a more balanced approach in the legislature so that we can actually debate these types of issues,” Hill said at a press conference last year.

“For too long there are ideas out there that aren’t even allowed to be debated on the floor of the house. This is one of those.”

Every Republican state legislator the Valley Patriot spoke with said that the Democrat party leadership in both the House and the Senate has blocked their attempts to make the law more effective.

“Many voters lack trust in Beacon Hill because of actions like this where public officials are able to skirt the law. These fines will hopefully put some teeth into our laws and provide the transparency and accountability that the public demands and deserves.”

HELP IS ON THE WAY

No longer lonely voices in the wilderness on the issue of public records, Republicans like ultra conservative Representative Jim Lyons and moderate Senator Bruce Tarr are getting help from some unlikely allies.

“I have always believed strongly that the public should have instant access to public information, and the information public officials use to make decisions. I am someone who believes that we need to work hard to restore people’s faith in government. Part of how we do that is to make all information and how we make our decisions as public officials available on-line and as accessible as possible.”

The legislation Eldridge filed this session would not only impose fines on public officials who violate the law, but (like Lyons), would assess attorney fees for members of the public who have to seek court action to force the release of public documents.

“This changes the standard and allows for attorney fees if a town or city or public agency does not provide the information and someone has to go to court to get it. Now, [if his legislation is passed] that person can get attorney fees. My hope is that it will increase pressure on an agency to provide public information in first place.”

Eldridge also submitted bills that would force all public agencies covered under law to put public documents on-line. The Eldridge bill would add the state’s administrative courts to do on-line records. “This would ultimately mean that there would be reduced costs for the public, there would be less of a need for copying documents, and it would reduce the amount of man hours needed to research the information someone requests.”

Eldridge recently authored a bill changing the Senate rules so that all votes in the State Senate are posted on-line for public inspection.

A ROOKIE TO THE RESCUE

Joining Eldridge in the senate and the Republican leadership in both houses is newly elected State Senator Katie O’Connor Ives (D). Considered a liberal “left wing” Democrat, Ives surprised many during the primary election in 2012 when she declared (during a Valley Patriot debate) that she was committed to imposing financial penalties on anyone who violates the state’s public records law.

“People have the right to see those records and if there is no penalty in the law I believe we need to correct that.”

Asked how she would handle pressure from the party leadership who has long blocked changes in the law, Ives said that any opposition she encountered on the issue would make her work harder to get the changes passed.

“I believe we need to shine the light of day on what our government is doing and if my party doesn’t agree with that, I will just have to work even harder to make sure that there is transparency and openness in our government, because it is our government,” she said in an interview after the debate.

The Ives Bill calls for a $50 a day fine on any public official or public employee who fails to turn over public records within ten days. This is not as harsh as the Lyons Bill which calls for higher fines, but Ives says that on the issue of imposing penalties for violations of the law “it’s vital to having transparency in government. I don’t care whose bill gets passed, as long as we have an effective law that can be enforced, right now we don’t have that.”

Democrat State Representative Diana DiZoglio (D) Methuen, also a newcomer, said she ran on transparency in government and says she is committed to keeping her promises to the 5,000 people whose homes she visited during the 2012 campaign.

DiZoglio filed her own legislation similar to the Ives bill calling for daily fines for any public servant who refuses to turn over public records and attorney fees for members of the public who seek court action.

A WELCOME REVOLT ON PUBLIC RECORDS

State Representative Jim Lyons says he is pleasantly surprised that there are Democrats willing to buck their party leadership to stand for changes in the public records law. “Having Democrats beat this drum is wonderful, I wish more of them would do that. With a little help from rank and file Democrats we can send a clear message that the way it is now, is simply unacceptable. I welcome any help and I will work with anyone who is sincerely interested in holding our public officials accountable. I believe the timing could be right on this one and we might be able to get real meaningful legislation passed. I think at the end of the day what you will see is whether it’s my bill or someone else’s is a revolt on Beacon Hill. A revolt where the members say to the leadership something has to be done here, this has to stop… and the leadership will have to listen.”

“There is absolutely no need for The Valley Patriot or anyone else out there to fight this hard to find out what our government officials are up to. But at least now we can do something for future cases and make sure things like what is going on in Lawrence will not happen again.”