By ValleyPatriot on June 17, 2015Comments Off on Patriotism Lives 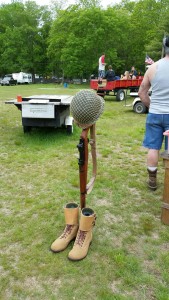 This past Memorial Day weekend I traveled down to a campground in Rhode Island. It’s a place called Holiday Acres and it has a lot of seasonal campers year round and, of course, many weekenders during weekends in the summer. Those of us who have made the decision and financial commitment to be seasonal campers have developed friendships over the years. Most of us have families, still have kids in school and spend time at the camp during the summer. We do a lot of fishing, make s’mores and sit by the campfire as a way to keep us all close.

I’d love to say that I spend every weekend at the camp, but I don’t. There is always something happening during the summer that prevents me from being at the camp, whether it be family commitments, work, or something unforeseen. On Memorial Day I usually attend events before or after the weekend, to honor those who have passed and served our great nation. Long weekends are rare and the kids are only young once, so spending time with the family is a priority for me.

My wife and I are both veterans. She served in the Navy and I served in the Air Force. Both of us feel a deep sense of pride in our country and are very patriotic. We’ve both make a personal commitment to veterans in our own way and feel that we do live in the greatest nation on earth. However when I watch various negative news stories on television or read about anti-patriotic acts that involve burning the flag, it troubles me. Or when I hear the President tell the world that we’re no better than any other country, it doesn’t give me a great sense of confidence that my wife and I are in the “patriotic majority” anymore. I often feel that patriotism is a dying sentiment unfortunately.
Then… a surprise.

Several weeks before Memorial Day weekend, we were approached by a fellow camper by the name of Chris Hines. Chris is a veteran of the Army and an all-around great guy. Chris is an extremely creative guy that makes military shadow boxes in his spare time and we can both spend countless hours reminiscing about our days in the military. He asked my wife Dawn and I if we would help with a flag retirement ceremony on Memorial Day at the campground. Of course we said yes, but I kept my opinion of a “waning sense of patriotism in this country” to myself. Chris spent weeks in preparation, often checking in with me and seeing what I thought about various ideas. Week after week Chris would drive around the campground and promote the campground’s first US Flag Retirement Ceremony. “Bring your old flags and let’s pay our respects,” he’d say to those who would listen.

So, Memorial Day came. Dawn and I arrived fifteen minutes early, before noon at the campfire pit, which has a huge flagpole planted into the ground right behind it. Chris was there already prepared with flags neatly folded into triangles and had arranged a war memorial battle cross of boots, a rifle and helmet used to memorialize fallen comrades in arms. As we arrived there wasn’t much of a crowd. My suspicions of “waning patriotism” seemed to be a reality. I had a sinking feeling that it would only be Chris’s family and mine, retiring flags.

Then just minutes before noon a crowd started forming. People started walking over to the fire pit and golf carts pulled into the field. Chris got the ceremony underway precisely at noon and started reading through the program he had written by hand. He then asked my wife and I to do our parts. Symbolically, Chris had unstitched a US flag separating the white stripes, red stripes and the field of blue. Each part was retired to the fire and saluted by veterans. As the ceremony went on, the crowd was asked to participate by taking pieces of other flags and retiring them to the fire. Again each piece was saluted as it entered the flames. Then the flags that were collected for months were each individually retired.

Something magical happened. A crowd of ten turned into a crowd of one hundred. Kids came dressed in Cub Scout and Boy Scout uniforms. Other children and teenagers looked on with interest and even some voluntarily participated. One young teen brought his trombone and played God Bless America while masses of campers, both weekenders and seasonal of all ages succumbed to their patriotic pride as they knelt down to retire weathered old US flags. Some people were visibly shaken to tears as others stood solemnly silent and watched as Old Glory waved high above us all, flapping in the wind. It was all so very surreal.

The ceremony ended with almost everyone thanking Chris and the rest of us who participated in helping him. People shook Chris’s hand and patted him on the back. A tremendous sense of pride, patriotism and appreciation seemed to wash over even the most hardened camper that afternoon. I’ll be honest… I was surprised and yes, a bit relieved. Almost everyone asked that a Flag Retirement Ceremony, become an annual event at Holiday Acres Campground. As long as Chris is around I’m sure it will be.

So in closing, thank you to Chris Hines for showing me and everyone else that … Patriotism Lives!