By Tom Duggan on December 9, 2010Comments Off on Paul Adams Answers Bogus Eagle Tribune Story on His Finances 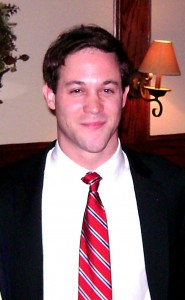 An Eagle Tribune story last month called into question the source of campaign money spent by State Representative-elect Paul Adams and even insinuated that he lied about his background and work experience prior to the election. Adams issued this press release a few days later, and, not surprisingly, the Tribune refused to print it. Here is Adams’ response to the Tribune story:

During the past [month], there’s been a lot of loose talk and silly speculation about the financing of my successful campaign for State Representative from the 17th Essex District,” observed Adams.

“Worse still,” Adams continued, there’s been a lot of inaccurate reporting and erroneous gossip about me and my educational and employment background by people whose job it is to be precise, accurate, and non-judgmental, but who, for whatever reasons, have chosen not to be so in my particular case.”

“Out of respect for the Office of Campaign and Political Finance that is now conducting an orderly review of my campaign’s financing, I will have little to say now until that review is completed, other than this: (i) that I welcome the OCPF review, (ii) that I’m cooperating fully with it, and (iii) that I’ll have plenty more to say on this subject once the review is complete.”

Adams continued: “Nevertheless, given the degree of attention that this matter has received (fueled, I am sad to say, by some inaccurate press reporting), I believe that as the State Representative-elect for the 17th Essex District I also have a duty to reassure my constituents, both those who voted for me and those who did not, of the following:

• The sole source of the approximately $50,000 that is the subject of the OCPF review, whose inquiry I welcome, was my own personal funds.

The sources of most of these were tax-exempt gifts from immediate family members.

• Any errors in the financial reporting or disclosure of those monies, assuming, without admitting, that there were such errors, were, at the end of the day, the result of political inexperience, nothing more.

Allow me one final observation about the published comments in [last month’s] Lawrence Eagle-Tribune by Democrat State Committee Chairman, John Walsh, who, among other things, called upon the OCPF and the State Ethics Commission to investigate me. If Chairman Walsh’s statements were at all accurately captured by the aforementioned rogue reporter (and that is a big “If”), then I would respectfully suggest to Chairman Walsh the following: rather than distracting the public from the Democrat Party’s own looming scandals by issuing unseemly, partisan directives to two state agencies that should remain professional and above the fray, Chairman Walsh ought to focus on putting his own house in order.”

“Chairman Walsh can begin by addressing the real corruption right under his nose: the far-reaching and exclusively Democrat Party-driven Probation Department scandal that, thanks to the Boston Globe and the Ware Report, will soon be attracting the attention of Federal and State Grand Juries,” Adams predicted.

Adams added: “I would also respectfully suggest to Chairman Walsh that it is this Democrat Party scandal that is the real story, and one that, to borrow Chairman Walsh’s own words from today’s Eagle Tribune story, ‘raises serious questions that deserve clear and unambiguous answers’ to a far greater degree than does a routine review of the campaign finances of a first-time Republican State Representative-elect.”

“When might the citizens of Massachusetts expect answers from you, Chairman Walsh?” Adams asked.

Adams concluded by stating: “Let me assure all those voters who supported me in this past election that I am eagerly looking forward to January, when I assume my role as your fearless State Representative and begin the hard work of changing business as usual on Beacon Hill.”