By Tom Duggan on August 2, 2018Comments Off on PAWS II Bill Protecting Animal Welfare and Safety Approved by MA House and Senate 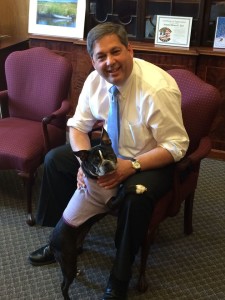 Boston-    Legislation intended to enhance humane treatment of animals, and punish those who engage in animal cruelty, has received final legislative support following approval by the House and Senate today on Senate Bill 2646, Protecting Animal Welfare and Safety.

The legislation furthers anti-abuse measures first secured in the 2014 Protecting Animal Welfare and Safety bill. Senate Minority Leader Bruce Tarr (R- Gloucester) led lawmakers to adopt the bill, also known as the PAWS Act, following the discovery of extreme abuse and cruelty in the case of a dog that was stabbed, burned, cut and had bones broken. The “Puppy Doe” case led to the arrest and conviction of Radoslaw Czerkawski who was recently convicted of 12 counts of animal cruelty and sentenced to 8 to 10 years in prison.

“PAWS II builds on the foundations of our original law and ensures that abuse is reported and enforced, and that our animal control laws reflect the seriousness of animal abuse,” said Senator Tarr. “Puppy Doe inspired me and many others to take strong legislative action to increase protections for animals and prevent animal cruelty and neglect. Animals deserve humane treatment and protections from those who would abuse them.”

“This long-overdue legislation is one of the most important steps Massachusetts has taken in years to systematically protect pets and wild animals against abuse, cruelty, and mistreatment,” said Senate President Karen E. Spilka (D-Ashland). “As a longtime advocate for the rights of animals and those who own them responsibly, I’m proud and relieved to see this language written into law.”

“Our commitment towards ending the cruel and inhumane treatment of innocent animals is steadfast, and today we have taken significant action to protect their safety and welfare,” said Senate Rules Committee Chairman Mark Montigny (D- New Bedford), a longtime champion of animal welfare legislation.  “There is zero tolerance for such despicable brutality and today’s action by the Senate sends a clear message.”

“This legislation furthers the Commonwealth’s commitment to protecting the health, safety and well-being of animals,” said State Senator Adam G. Hinds (D- Pittsfield).  “Acts of animal cruelty will not be tolerated and those who commit these terrible actions should be on notice that such abuse is punishable by law.”

Tarr said that in addition to lessening animal cruelty there could be a corresponding reduction of crimes against people citing a Massachusetts study which found that a person who has committed animal abuse is five times more likely to commit violence against people.

Key provisions of the animal welfare bill, Senate Bill 2646, an act to Protect Animal Welfare and Safety in Cities and Towns,include those which:

Senators gave initial approval of the bill unanimously in March.  The House and Senate have enacted the bill which now moves to Governor Baker for his signature.