By Tom Duggan on March 8, 2010Comments Off on Mayor Lantigua Spends Nearly $10K on Office Renovations 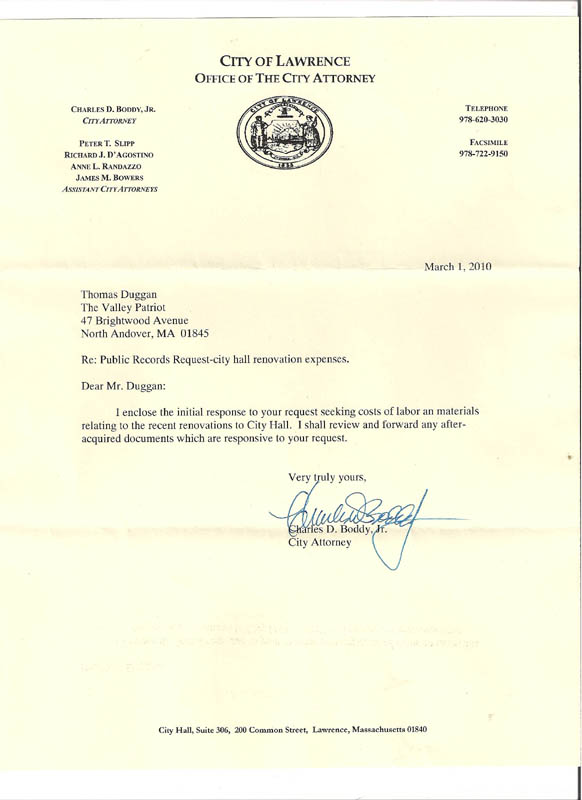 Then he hired Lenny Degnan from North Andover to be his chief of Staff.

He also talked about the city of Lawrence giving preference to Lawrence business when dealing with vendors who want to sell products or services to the city.

And since getting elected, Lantigua has repeated his mantra about “pinching pennies” and saving as much of the taxpayers money as he can.

He even cited cost saving measures and a reorganization plan when he was trying to fire Mike Sweeney and while he was firing Myles Burke.

He said that, even though he has not presented or even drafted a reorganization plan for the city.

Lawrence is so broke that the city has closed two fire stations. Police officers and laborers have taken work furloughs, city workers have been laid off, given up health benefits, the city is down to one food inspector in the entire city, and Lantigua has laid off or fired at least a dozen city workers to “save money.”

But, while he has been blowing smoke at the taxpayers about how fiscally responsible he has to be in order to justify his politically motivated firings and layoffs, he is petitioning the state legislature for the ability to borrow $35 million dollars for operating expenses. He says he needs the money because the city is broke.

But, documents obtained by The Valley Patriot show that Lantigua spent nearly $10,000 to have curtains and new laminate floors installed in the mayor’s office four days after being sworn in.

What’s more, Lantigua bought his office curtains at a store called “Not Just Curtains” on Broadway in SALEM NH!

Huh? Could that be right?

I mean Lantigua verbally attacked Lawrence business owner Keith Wlodyka at a council meeting last month saying, “If you lived in Lawrence I would care what you think.”

Ironically, Lantigua himself voted to increase the sales tax from 5% to 6.25% last year before he resigned as State Representative.

Doesn’t the state need that tax revenue Lantigua argued when he justified his vote to raise the state sales tax?
Is this what Lantigua meant when he said he was going to help Lawrence businesses? How does this stimulate the economy of the “great” city of Lawrence?Is there no one who sells curtains in the city of Lawrence? Is there not one Latino in the city who can provide these services?

So many questions so few answers.
The city of Lawrence is a poor community. The average median income in the city is about $12,000 per year. Yet, Lantigua spent equivalent to a full year’s salary of a Lawrence worker in the City of Lawrence to make his office look pretty!According to the documents we obtained, Lantigua spent $2,649 on “window treatments”, $2,262 for “materials” and another $4,571.56 on labor to install a new “laminate floor”, curtains and other amenities.

And he skipped over the border to avoid the sales tax he voted to impose on the rest of us in the process. Only in Lawrence folks, only in Lawrence. But Lantigua learned from the best. Just remember right after Governor Deval Partick won his election, he bought new curtains for the governor’s office too.

Tom Duggan is the President of The Valley Patriot, Inc. A former Lawrence School Committeeman, and hosts the Paying Attention! radio program at WCAP, 980 AM, every Saturday morning from 10a.m – noon.
valleypatriot@aol.com