By ValleyPatriot on July 3, 2015Comments Off on Pelletier Family Gives Powerful Testimony in Support of Justina’s Law 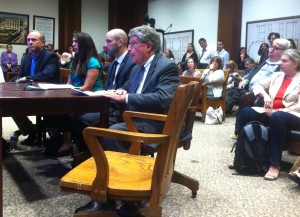 Valley Patriot readers may be familiar with the 17 month long ordeal suffered by young Justina Pelletier at the hands of the Massachusetts Department of Children and Families (DCF) and the huge effort it took from 100,000 ordinary people from across this great land who came together to finally rescue her and return her to the loving arms of her parents and sisters. The VP was present when Justina finally returned home almost exactly one year ago on June 18th, 2014.

Today Justina’s father Lou and elder sister Jennifer returned to Massachusetts to testify at a public hearing at the State House in support of House Bill 1469 – An Act called Justina’s Law – filed by Marc Lombardo, Representative (R) for Billerica and supported by James Lyons, Representative (R) for Andover.  Besides the members of the Joint Committee on the Judiciary, in attendance were also Senator Linda Dean Campbell (D) of Methuen and Keiko Orall, Representative (R) for Lakeville.
Lou and Jennifer were accompanied by Attorney Philip Moran who ended up representing the family in court last year after Judge Joseph Johnston refused to allow the parents to be represented by the lawyer they chose – Dean Staver from Liberty Counsel.

Committee Chair Senator William Brownsberger (D) of Belmont invited testimony from Lou Pelletier who testified eloquently about the sheer horror his daughter and his family went through for 17 months at the hands of DCF and Harvard’s Children’s Hospital and the purgatory they were suddenly cast into by Dr Alice Newton without any recourse. Lou also testified that the parents were stripped of their family rights because Harvard’s Children’s Hospital disagreed with a diagnosis made by Tufts Medical Center. The parents were condemned as abusive because they believed Tufts’ diagnosis was correct and that Harvard’s was incorrect. They lost their child for that effrontery.

Senator Brownsberger then invited testimony from Jennifer Pelletier who gave wrenching testimony about what her little sister went through at the hands of the Government and Harvard’s Children’s Hospital. Jennifer testified that she was Justina’s ice skating teacher and that Justina was doing great at ice skating till she ended up at Harvard’s Children’s Hospital and now is unable to even stand by herself.
Representative Lyons then elicited testimony from Lou Pelletier about the actual circumstances of his daughter being taken away from her parents one Thursday afternoon and how the child did not know for 2 whole days what had happened and how she was denied her basic civil and human rights including family love, religious freedom and her right to an education. Lou also testified clearly that he called 911 to seek help from Boston Police to prevent Harvard’s Children’s Hospital from kidnapping his precious child but that Boston Police refused to help a powerless family from Connecticut fight a Harvard Hospital and never ever did so.
Representative Lyons then invited Attorney Philip Moran to testify. Attorney Moran put on the record that parents have the absolute right to choose treatment decisions in the best interest of their child, that parents have the right to choose a non-Harvard hospital over a Harvard hospital and that they should not be punished for doing so by having the state of Massachusetts take their child away and thrown into foster care. He hoped the Committee would pass this Bill so no other family ever has to go through what Justina and her family were put through.
Representative Lyons brought testimony to a close by stating that it was ironic that DCF spent so much money and time fighting the Pelletiers when they claimed a lack of funds led them to lose track of children genuinely in trouble.
There was loud applause from the standing-room only audience when testimony concluded. Many advocates for the rights of disabled people came out to speak with the Pelletiers as the Hearing moved on to other Bills.
H1469 currently seeks sponsors from the Massachusetts Senate.