By ValleyPatriot on April 26, 2021Comments Off on Perry’s New VSO, Putting Veterans First In Methuen ~ The Perry Report 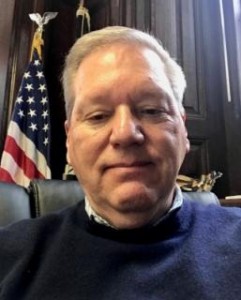 Methuen Mayor Neil Perry had an uphill battle recently getting his pick for Veteran’s Services Officer approved by the city council. A majority of the council was initially against the appointment of Paul Jensen after veteran groups in the city spoke out against his nomination.

During the meeting however, Perry was able to persuade a majority of the city council to approve Jensen. He is now in charge of providing services to veterans who live in Methuen.

Since then, local veteran groups have (at least publicly) embraced Jensen and vowed to work with him. Perry talked with Jensen publicly about moving forward.

Paul Jensen has been a Methuen resident for the past 12 years, is a veteran of the 82nd Airborne Division, in which he was an active-duty commissioned officer.

He was then appointed by deceased Senator Ted Kennedy to the US Military Academy, where he taught chemistry for three years. Following the end of his military career in 1986, Jensen worked in the defense technology industry for 30 years. In 2008, he became the CEO of Halo Maritime Defense Systems. He retired from this position in 2017.

At this point, Jensen became involved with a group of investors working with a company in Wakefield, MA named Byrna Technologies, which specializes in less-than-lethal weaponry and defense technology.

He was appointed to his current role as Veterans Services Officer in January 2021.

When asked how he was settling into his position, Jensen was optimistic.

“Methuen has a great history of support for veterans. The first thing I wanted to change was the impression that we make when [veterans] come in [to the office]. It is a professionally run, efficient organization.”

“My first priority is to have a presentable area that we can all be proud of that sends the right message about how we support our veterans.”

Jensen also remarked that there are a large number of services available for Methuen veterans today, especially in Massachusetts. According to him, it is the only state that boasts Chapter 115, a support program for veterans that provides numerous benefits for those who have served and their families.

During the interview, Mayor Perry noted that when he appointed Jensen to his current position, there was a “hullabaloo,” amidst public complaints of favoritism and nepotism.

However, both Mayor Perry and Jensen denied ever meeting each other before Jensen’s interview process prior to the appointment. Jensen took the opportunity to address these complaints.

“I came into this thing with no agendas and no connections…I talked to the VFW, and I talked to the people, and I understand where they were coming from. They just didn’t know who I was.”

He also explained that his intentions in applying for this position came out of a strong desire to serve the public.

“Every job I’ve ever had, I’ve sort of turned it into a personal crusade, a cause to do something bigger than myself. That’s really what I’m all about.”

Jensen claimed that the feedback he has received from Methuen veterans has been “extremely positive,” crediting a call log he has instituted in the Veterans’ Office that has helped himself and other employees keep track of veterans and their needs.

However, he expressed concern that many veterans in Methuen are not aware of the services available to them.

“I wasn’t even aware of [the services], so I think the outreach part is really important.”

Despite his distaste for Facebook, Jensen encouraged veterans to join and keep track of the Methuen Veterans Facebook page (run by the VFW) for more information regarding his office’s services.
When asked about his vision for the veterans’ community in Methuen, Jensen expressed a desire to “go beyond the routine,” including a prospective project to honor veterans of the Vietnam War.

“We’re looking at, for example, bringing [the miniature version of] the Vietnam Veterans’ Wall to the city…It would really be a wonderful community activity to recognize our Vietnam veterans.”
This effort is currently pending approval from a commission in Washington D.C.

Jensen also sung his praises for the JROTC community in Methuen.
“They are such good kids. They’re so well composed in the way they carry themselves and express themselves.”

Jensen expressed a strong desire to have JROTC members cooperate with himself, the VFW, and the American Legion in organizing Memorial Day activities.

“The more people who get involved, the better.”

When asked about any additional services that his office provides regarding COVID-19, Jensen (who has been fully vaccinated himself) explained that vaccines are offered by the VA (Veterans Affairs), which he referred to as “very, very efficient.” The organization has recently opened up vaccines for veterans of all ages who are in the VA system.

However, there is an ongoing effort in the Veterans Services Office to open up vaccines to all veterans, regardless of their presence in the VA system.

Mayor Perry also encouraged all citizens to get their vaccinations when they become available.

“Everybody I’ve met has been so supportive and so helpful, and everybody’s there to serve the community… [The people in City Hall] are honest, salt-of-the-earth people. That’s why we live in Methuen.”
“From a veteran’s standpoint, if I can make lives better for the veterans in our community, then that’s part of that bigger effort.”