PJ Keating Company Agrees to Restore Damage to Wetlands Area in Dracut, Caused by its Quarry

By Tom Duggan on July 2, 2013Comments Off on PJ Keating Company Agrees to Restore Damage to Wetlands Area in Dracut, Caused by its Quarry 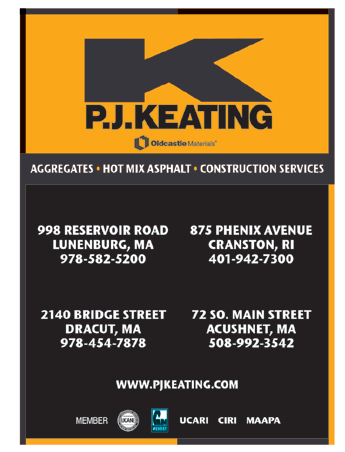 MassDEP inspected the facility in November, 2010, and found multiple violations, including significant erosion from its operation, causing siltation into a nearby pond that borders Peppermint Brook. The company had failed to correctly place and maintain erosion controls, allowing sediment from site operations to enter the pond. In addition, a catch basin equipped with a flow divider system was not operated properly, allowing sediment-laden stormwater to be directed toward the pond instead of settling lagoons.

The company’s actions resulted in the discharge of pollutants to the pond, adverse impacts and alteration of that pond through erosion of 50 linear feet of bank and by siltation causing impairment of 12,000 square feet of land under water.

“PJ Keating did not use best management practices, and allowed sediment-bearing stormwater to cause siltation of the pond and nearby wetlands resource areas,” said Eric Worrall, director of MassDEP’s Northeast Regional Office in Wilmington. “Further, sediments were not properly detained using the stormwater lagoons at the site, with some sediment routed directly into the pond via a catch basin structure equipped with a flow divider system. This resulted in further siltation of the pond, as well as adverse impacts to the hydrology of the pond and its bordering wetlands resource areas.”

Under the terms of a consent order, PJ Keating agrees to conduct the following measures: implement a plan for wetlands restoration of all impacted resource areas; provide and maintain through diligent inspections adequate erosion controls to prevent sediment from entering the pond and bank; submit for review and approval, a new, comprehensive stormwater management plan that includes provisions for eliminating untreated stormwater from entering the pond; install berms around the pond to intercept runoff; ensure a minimum level of water in the pond; maintain a stockpile management plan; establish a no-work buffer area around the pond; and establish a long-term operation and maintenance plan.

PJ Keating also agreed to implement a Supplemental Environmental Project, in which it will undertake to properly redirect nearby street drainage to settling lagoon(s) that are not wetlands resource areas.

If the company fully complies with all terms of the order, MassDEP has agreed to suspend $37,650 of the assessed penalty.

PJ Keating Company Agrees to Restore Damage to Wetlands Area in Dracut, Caused by its Quarry added by Tom Duggan on July 2, 2013
View all posts by Tom Duggan →