By Dr. Charles Ormsby on September 5, 2007Comments Off on Pro-Override Group’s Embarrassing Obfuscation: An Admission of Guilt

The group’s postcard cited home sales statistics for Andover and North Andover since 2002 and used this data to encourage voters to approve the $1.65 million override. In our August issue, Sandy Gleed, Chairman of NAU, published a “rebuttal” claiming “Dr. Ormsby has it wrong”.

Two claims were made by the pro-override people in their postcard:

1. That North Andover home values have suffered a 19% decline relative to Andover, AND

2. That the cause of this decline is “under-funded schools and highly-publicized conflicts.”

My “Snookered” article focused on the first claim, because it would be pointless to debate “the cause” of a decline if there was no decline to be explained. To summarize, I made the following four key points in “Snookered” and backed them up by sound analysis and data: 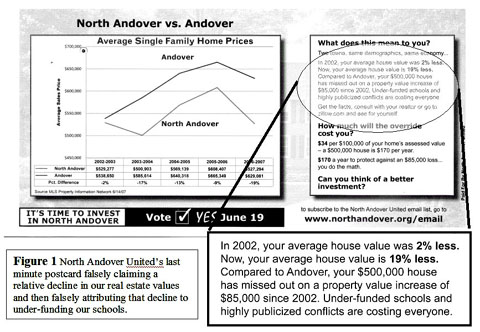 1. The purported decline in home values suggested by override supporters was largely due to their selection of a demonstrably unrepresentative starting point. Their selected starting point (2002/03) was the only year during which the average sales price of North Andover’s homes came close to that of Andover’s (2% below). The average sales price in North Andover for the two years before 2002/03 and the two years after 2002/03 was 11% below that in Andover. Conclusion: Override supporters selected 2002/2003 as the starting point to deceive North Andover voters.

2. Simple statistics indicate that the fluctuations in home sales price data can be completely accounted for by sampling errors. I pointed out that the data used in the politically motivated postcard was an average of the sales prices of only about 5% of the single-family homes in both towns (~300 homes). Just as polling a sample of voters yields a polling error (and honest polling organizations report this margin of error), so will sampling home sales data. In this case the entire variation cited by override proponents is within the margin of error due to sampling.

3. Next, I showed that there is a systematic variation in the sales data each year caused by changes in the number of new residential developments (all very expensive homes) completed and sold each year. Low and behold, if you look at the individual homes sold, the override supporters’ starting point of 2002/03 included 37 expensive new homes that were completed and sold in North Andover – this was the year the average North Andover sales price was only 2% less than Andover’s. In the final year (2006/07), when North Andover’s home values looked like they had declined, only 7 new homes in North Andover were completed and sold. Wow! It looks like we might have identified why the average sales price appeared to decline … and it had nothing to do with taxes or schools or highly-publicized conflicts!

4. Finally, I obtained all single-family assessed property values from the town assessor’s offices in both North Andover and Andover. This data indicated that there was NO DECLINE in North Andover’s property values when compared to Andover’s. In fact, there may even have been a slight advance in North Andover values over Andover’s between 2004 and 2007 (See nearby figure). Note that the assessor’s data is NOT subject to sampling errors; it represents 100% of the homes, not just a 5% sample. Also, the assessor’s data separates out the values of new construction so it will not corrupt the averages AND it is audited by the state for accuracy.

Wouldn’t you expect the override proponents’ rebuttal to respond to these four carefully researched points?

Which of these four points did they attempt to refute?

NONE! Not a single one.

Override supporters need to actually defend their choice of starting date. They need to demonstrate that, in light of the sales data before and after their selected starting point that it is representative of sales data of that era. Instead they just ignored the issue.

Did the pro-override supporters address the fact that the observed fluctuations in average sales prices can be completely explained by errors resulting from random sampling? NO! They just dismissed reasoned analysis as “mathematical gibberish.” 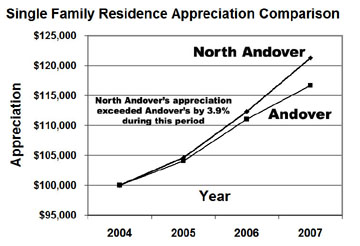 How anti-intellectual. Is this how they respond to serious analysis? Is this the attitude they wish to promote in our schools with the extra tax revenues they will be extracting from our overburdened citizens?

When did basic statistics become “mathematical gibberish”? Should our high school students avoid taking courses in statistics because it is “gibberish”? I can’t help it if the leaders of the override effort are innumerate, but I suggest they not celebrate their mathematical illiteracy in public.

“Snookered’s” research concerning the distortions in sales statistics arising from the sale of expensive homes in new developments (Point #3) and the analysis of our town assessor’s data (Point #4) were not addressed at all. Are these facts too tough to handle for the override people?

Instead of providing a reasoned rebuttal, override supporters dodged my arguments by trying to muddy the water. Here is just a sample of what they said with quick responses:

Override proponents wrote, “You don’t need a doctorate from MIT to know that statistics are merely used to show relationships, not causality.”

I agree. This is a point I often make. In this case, it is the override supporters that are claiming a relative drop in real estate values and a causal relationship between school funding and property values – not me. Therefore, it is incumbent upon them to prove their claims. Their postcard presented data purportedly supporting the claim that our real estate values declined by 19% relative to Andover’s. The purpose of “Snookered” was merely to show that the data they presented does not support their claim and, in fact, that there is credible data that contradicts their claim. If the override supporters’ argument now merely boils down to “Go ask your real estate agent,” then they should admit that the data they presented was simply designed to deceive the voters … a deception they now seek to perpetuate.

The pro-override people also wrote, “we used data from reputable, professional sources,” implying that I questioned the source of their data. But I never did. Quite the contrary, I used data from the very same source (to determine sales statistics for the two earlier years, to determine sample sizes, and to determine the number of homes in new residential developments sold each year) to demonstrate that their claims were nothing more than nonsense.

The override leaderships’ commitment to honesty was defensible before they wrote their rebuttal — when it was still possible that they were unaware that their data did not support their claims. After my article made the facts clear and they could not mount a serious rebuttal, the override organizers should have been honest and admitted as much. Instead, they chose to ignore the facts and distract the readers from the real truth. They can no longer claim honest intent.

The pro-override supporters conclude their obfuscation with a lecture to me about my responsibility as a School Committee member, “to improve academic standards in a positive way.” Anyone who has been paying attention for the last four years knows that I have been the only School Committee member who has openly and aggressively challenged our administrators and staff to raise academic standards and expectations.

So my four points still stand. And the override zealots are still welcome to address them. One-by-one. Either disprove them with facts and sound analysis – no gibberish, no obfuscation, no muddying the waters – or fess up.