By Tom Duggan on November 5, 2022Comments Off on Psychological Center in Lawrence Recognizes Chief of Staff Virginia Gomez for 20 Years of Service 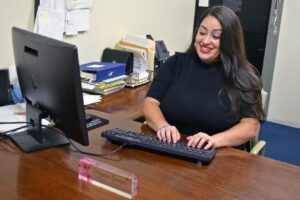 LAWRENCE — Chief Executive Officer Carina Pappalardo would like to recognize Chief of Staff Virginia Gomez for 20 years of service and caring she has provided to The Psychological Center and its guests.

Gomez joined The Psychological Center as a receptionist in September of 2002, and has learned from her coworkers, grown, and advanced through the organization ever since, becoming Chief of Staff in 2021.

After working as a receptionist, Gomez was the front desk supervisor overseeing six team members in the outpatient clinic. She was promoted to Office Manager in 2011, leading the front desk department, intake department, and medical records department. She is bilingual and also serves as an agency interpreter when needed.

According to CEO Pappalardo, Gomez has been a constant and loyal employee, bringing her knowledge, skills, and upbeat attitude to work every day.

“She has been here through the opening and closing of multiple programs over the years, a few changes in leadership, and consistently goes above and beyond. I have learned a lot along the way through her. Her passion, dedication, and achievements are highly commendable. Without question she is always available and willing to help in any area needed,” Pappalardo said. “I am honored to celebrate her 20th work anniversary and look forward to working alongside her for another 20.”

Gomez was born in Chicago but moved to Lawrence with her family when she was 10 and attended Lawrence High School.

Gomez said she grew up in a city where drugs were prevalent, quickly realizing even as a child that she did not want to follow those paths.

Gomez said she was drawn to The Psychological Center, and to work helping those with substance use disorders, because people she knew struggled.

“I thought I’d be able to help them more if I gained knowledge. I wanted to be able to help,” said Gomez. “I was hired as a receptionist, but I was able to learn from people in every department and absorbed things like a sponge whenever I could. I wanted to keep learning.”

Recently Gomez has worked at Pegasus House, Women’s View, and at the Daybreak Shelter as needed due to staffing shortages assisting with anything when needed. Working directly with guests has taught her that kindness and patience are far more effective when trying to reach people.

As The Psychological Center has grappled with a staffing shortage recently, Gomez has also worked to help recruit new employees, and has also filled in at Pegasus House working as a case manager for some of the guests, an assignment she enjoyed because she enjoys connecting with guests.

Gomez said the biggest thing she has learned over her two decades with the organization is that substance use disorders are truly indiscriminate in who they affect.
“Anyone can fall into addiction. I’ve met scientists, engineers, judges, and lawyers who were struggling,” said Gomez. “It’s not just some select group of people. It can be anybody, and that’s something that’s really blown my mind.”

Over the past few months, Gomez and even Pappalardo have also pitched in by helping at the organization’s three programs, and Gomez said she is often inspired by Pappalardo’s willingness to do any jobs that are needed, despite her position as CEO.

“Carina plays a very active role in the agency jumping in wherever and whenever anyone needs her. Her presence at the programs makes a big difference and she has a big, amazing personality. You don’t find many leaders like her,” Gomez said. “I think the only way they’ll ever get me out of here is to drag me out. I love this place. I love what we do, and I will forever keep waking up and wanting to come here every day.”

Psychological Center in Lawrence Recognizes Chief of Staff Virginia Gomez for 20 Years of Service added by Tom Duggan on November 5, 2022
View all posts by Tom Duggan →