By Tom Duggan on July 23, 2016Comments Off on Public Rallies for Police, Speakers Talk of Importance of Supporting Police 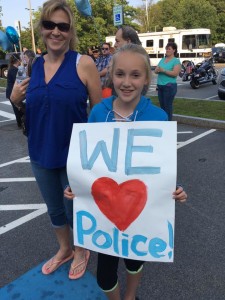 More than 350 people rallied at Methuen High School last week to show their love and support for police officers and their families. The rally was organized to honor of the five Dallas, and three Baton Rouge police officers who were executed over the last ten days.

The rally was organized in eight days by 1990 police survivor Tom Duggan, and Methuen Police Chief Joe Solomon. Dozens of police officials from all over the Merrimack Valley joined in the rally from as far as Woburn, Newburyport and Merrimack, NH.

Duggan addressed the officers in attendance saying, “We love you, we support , we’ve got your backs, and your lives matter!”

A MESSAGE FROM WASHINGTON 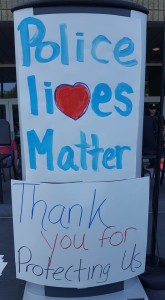 Craig Floyd, President and CEO of the National Law Enforcement Officer’s Memorial Fund, in Washington D.C., addressed the crowd via a message recorded earlier that day. As the recorded message played the public and the officers who joined in bowed their heads.

“The last few weeks of not been easy. But those who work in law-enforcement know that it’s never easy. No one goes into this to work because it’s easy. You do it because it’s your calling. You feel the need to help and protect those around you. You put your lives in danger every day by wearing the badge.”

Floyd thanked the dozens of officers who attended the rally, adding, “While it may be hard to ignore the naysayers and negative rhetoric, know that the vast majority of our citizenry very much appreciate the work you do, and look to you as a sign of strength and safety. You are in fact, the heroes among us.”

A THEME OF RESPECT 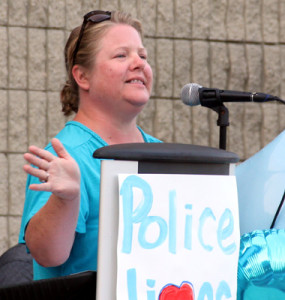 Becky Duggan Kruschwitz, of Plaistow NH, is the daughter of slain Lawrence Police Officer Tom Duggan, Sr. Duggan was killed in 1990 by a man with a metal baseball bat.

“What really touched me with Dallas, is that there was a 9 year old little girl on TV talking about her last goodbye to her dad. It’s a horrible thing when you are a family member to get that phone call, and to constantly replay that last interaction with your loved one. You take it all to heart, especially when you are a little kid. I was 13, this little girl was 9 years old. It’s just so heartbreaking to see the violence, and to see the hate. We need to teach our kids respect. And kindness.”

“It’s a very, very difficult time to serve in Law Enforcement, to work in corrections, to serve in public safety in our country,” Essex County Sheriff Frank Cousins said.

“My father told me when I was a young boy, this is Captain Kelleher. Nick Kelleher was our night captain. I was told to address him as Captain Kelleher and to respect the police, and respect the job they do on a daily basis. That comes from all of us as parents, to teach our young people how to respect our law enforcement, teachers, police officers and correctional officers.” 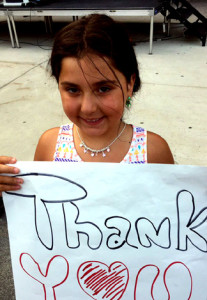 Disabled Woburn Police Officer Bob DiNapoli was shot 6 times in an ambush in 2009. The city of Woburn then tried to deny him medical benefits to save money in their budget. He is the recipient of the 2015 Officer Tom Duggan, Sr. Hero Police Officer Award.

DiNapoli said that the people who turned out to support police and the people who reach out to wounded officers every day will never know the difference they are making. He recounted how the ten year old boy he saved the day he got shot sent him one of his Little League baseball cards as a thank you for helping him. “I still carry that with me in my wallet everywhere I go.” He also said the community would leave cards and balloons on his mailbox every day while he was trying to recover.

Former State Senator Steve Panagiotakos, a 1978 police survivor, talked about the life and death of his uncle: Lowell Police Officer Christos Rouses. Panagiotakos explained how Rousses was killed at the end of his shift and didn’t even have to take that final call. He also said that 99% of police officers are good officers who are being maligned in the media because of a few bad apples.

“If someone breaks into your house or tries to harm one of your children, who are you going to call, and who do you want showing up? The 99%, that’s who. So, let’s make no mistake about it, when blue lives don’t matter, then black lives, white lives, brown lives, rainbow lives, and any other kind of lives matter less. Because, when a community, or a society does not respect and appreciate those who protect them, then lawlessness will reign, and violence will abound, and their safety, our safety, will be significantly diminished.”

IT’S TIME TO STEP UP

John Macdonald (host of 980WCAP’s The Pulse and “JMac and the Bear”) said it’s time for good people to stand with our police officers against an unfair media and phony civil rights groups. (SEE FULL REMARKS)

“In these times of terror, it’s our blue lives that are our first line of defense here on the American streets. As Radical Islamic terrorists plan their next attacks, they must know that we stand against them, and that we stand with our police officers.”

The loudest cheers came when MacDonald ended his speech with, “Everyone’s civil rights matter, and that includes the civil rights of our police officers.”

Tom Duggan closed the rally talking about what he calls the “blood libel” against police officers by “cop haters” like Don Lemon, Ashleigh Banfield, and the other “fake journalists” on CNN. Duggan said that the lies told about police every day on CNN and other networks have created the environment that is costing police officers their lives.

Duggan said the only way it will stop is if people email and use social media to call out CNN and other anti police news networks when label and stereotype police officers in furtherance of advancing a “fake civil rights issue.”

Duggan also lectured all of the elected officials in attendance to stop voting against militarized weaponry that protects the lives of officers. “You get comfortable trying to please your colleagues and to you, things like body armor for police is a ‘political issue’. But to those of us in the law enforcement family it’s not a political issue. For us it’s pretty damned personal.”

Special Thank you to:

Gerard Maguire for reciting and explaining the pledge of allegiance.

Edgar Trancoso of the band Prospect Hill, for singing the national anthem.

Methuen School Superintendent Judy Scannell for use of the high school.

Methuen School Committee Member Jana DiNatale for getting a helium tank and blowing up balloons.

Chief Solomon for helping to organize.

Craig Floyd for recording a message for the police officers.

Syndicated radio host Jeff Katz for sending a recorded message but due to technical difficulties we were unable to play.

Carina Pappalardo and her children for making We Love Police signs.

Maria Fiato for live podcasting the event on Facebook.

Heav’nly Donuts on Pelham St. for pitching in.

Methuen Mayor Steve Zanni for helping to coordinate (though he wouldn’t let us have slush!)

The Blue Reapers for helping with internal security.

Public Rallies for Police, Speakers Talk of Importance of Supporting Police added by Tom Duggan on July 23, 2016
View all posts by Tom Duggan →