By ValleyPatriot on June 14, 2015Comments Off on Public Records Should Be Made Available to the Public – IN YOUR CORNER WITH SENATOR IVES 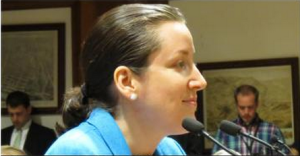 Last week, I testified on a bill I filed, S.1700, An Act Relative to Obtaining Information, before the Joint Committee on State Administration and Regulatory Oversight. This bill promotes access to information, available to all, within a reasonable time frame and for residents to have recourse in instances where their requests for public information are ignored.
Government should have transparency and accountability and the only way to ensure that this is occurring is to have access. Under Chapter 66 Section 10 of the Massachusetts General Law, a custodian has 10 days to comply with a request for public information. However, there are no significant penalties for non-compliance with this law.

Another bill heard at the hearing was a bill filed by the House Chairman of the Committee, Representative Peter V. Kocot, H 2772, An Act to Improve Access to Public Records. H. 2772 would update the definition of a public record to include electronic information as well as designate one or more records access officers to have custody of all public records whose names and pertinent contact information are to be posted conspicuously in offices and on websites. This bill would also clarify some of the egregious fees the public, as well as the press have been charged in obtaining public records.

Last year, my bill was incorporated into Chairman Kocot’s bill and was reported favorably out of the Joint Committee on State Administration and Regulatory Oversight. However, no further action was taken. In this new legislative session, I have made it one of my top priorities to increase government accountability and transparency across the board. This bill will strengthen the public’s access to public records and that can only be a good thing. I will work to continue the momentum gained through my bill’s favorable recommendation from the Joint Committee on State Administration and Regulatory Oversight in the last session, so the bill may be passed into law and public record requests result in true access to public records.