By ValleyPatriot on September 22, 2013Comments Off on Racist attitudes prevail with our so-called” leaders” 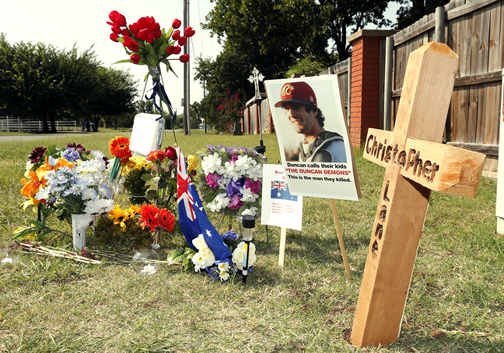 Christopher Lane went out for a jog Friday night as it was his routine as a college-bound athlete.

He hailed from Melbourne Australia and was passionate about American baseball. In fact, he was not only passionate about the sport, but also good enough to be a star athlete for his college team. On Friday, August 16th his life ended. He was shot to death allegedly by a 17 year old teenager who was on a joy ride with his two buddies.

This happened in Duncan, Oklahoma while Christopher was on an early evening jog.

Within a blink of an eye, a life was taken without a motive other than what has been reported in news outlets as the teenagers involved being gripped by “boredom”.

In the annals of crime and fresh off the public frenzy of the Trayvon Martin case, we are all compelled to struggle with how to categorize this crime The standard responses should be “hate crime” or “ gang-related” or perhaps an opportunistic event of adolescent excesses. But for this writer it is none of these. I believe this deeply troubling and senseless crime fits the same category as the Martin case and is apropos in modern times, a stupidity-driven crime.

People can now die in America for stupid reasons.

One item of interest that introduces a difficult dynamic is that the shooter is a young black man.

So now my thoughts revert to so called leaders or those with a voice; Oprah, Reverend Sharpton, Eric Holder and our President, Barack Obama. These are the folks who rallied a segment of the population to speak out against the unspeakable horrors of racist motivation as a motive for a crime. Despite the overwhelming scientific and qualitative evidence produced by the FBI where “racist inclination” was not a motive they projected their theory that the Martin killing was indicative of an intractable pattern in America; that blacks continue to suffer at the hands of a white supremacist conspiracy.

So my conjecturing poses a question. Will these so called leaders be silent on this crime? I will postulate that most certainly they will. My central focus is the President himself makes a very poor surrogate to Dr. Martin Luther King and countless other enlightened and spiritually motivated Civil Rights leaders who understood that racism is the scourge of humanity, and that attitudes of tolerance and spirituality are the only human conditions that could reverse it.

Our President and the minions listed here are not representatives of the higher calling of visionaries like Dr. Martin Luther King. They interjected themselves into a seemingly obscure Florida crime case to uphold a theory and when the evidence did not support their thesis, they forcibly used their pulpits of media and power to divide a nation.

And their silence on this case will prove my theory, especially when they actually have an opportunity to promote harmony by harnessing the theory that gun control-or lack of it- is the basis for both “stupid” crimes to have transpired. They could easily transition to an argument that the killing of Christopher Lane was as senseless as Trayvon Martin’s as gun control; a staple of their Liberalist agenda is the root of both crimes. But what I am very sure of is that such an outrage will not be expressed by them.

Their silence will be deafening and quite revealing.

They harbor racist tendencies and therefore as they are poor surrogates of Dr. Martin Luther King, they are equally poor representatives of all peace loving, tolerant people in our nation of all are representative heritages and cultures who yearn for genuine racial harmony.

The volume and force of their advocacy which is emboldened by their social positions and offices does not adequately disguise their misguided tendency to promote a racial agenda that is as destructive and inhuman as the racism they are speaking out against.

You can email Joe D’Amore at