By Tom Duggan on December 2, 2017Comments Off on RAY WILSON ~ HERO IN OUR MIDST-NO MORE, VALLEY PATRIOT OF THE MONTH 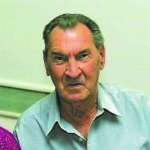 Normally this space is reserved for paying tribute to living veterans who have gone off and served our country and then come back to help other veterans.

Last month, however, when the Valley Patriot learned a member of the Valley Patriot family, Ray Wilson had passed away, we also learned for the fist time that he was a veteran who served in the United Staes Navy, as a Navy Seabea.

Wilson’s wife Joan Anderson Wilson says that because of the events going on in Cuba at the time “they did have arms, but he didn’t talk about it to me. All he said was that they had to be ready for anything they needed.

Growing up we knew Ray as “Uncle Ray” and throughtout the nearly 14 years of publishing the Valley Patirot, Ray was always supportive of our efforts in the community. He was also a staple at our annual charity BASH.

Raymond G. Wilson, 81, of Lawrence, passed away peacefully on October 20, 2017, at his home. Born in Lawrence, the son of Roy A. Wilson and Grace W. Wilson on September 25, 1936, Ray graduated from Lawrence High School in 1954 and served his country from 1956 through 1960 as a proud United States Naval Seabee. He spent his four-year tour of duty stationed in Cuba developing military sites.

His first job after leaving the service was for Perini Corporation working on the double 495 bridge over the Merrimack River. Throughout his life, he also worked for several contractors in the local area including N. Pandelena & Sons, George Cairns & Sons, and ended his career with Modern Continental in Boston with the Big Dig and the Route 3 expansion. He retired in 2002 from Teamster Local 379. He loved his family and enjoyed traveling and vacationing, but his favorite time was going to Rockport, Maine, every year and visiting family in Florida several times a year. Ray enjoyed coffee, donuts and old stories every few weeks with sister-in-law, Sandi Kannheiser, and our late brother-in law, George “Slim” Kannheisert — that was a must.

RAY WILSON ~ HERO IN OUR MIDST-NO MORE, VALLEY PATRIOT OF THE MONTH added by Tom Duggan on December 2, 2017
View all posts by Tom Duggan →