By Tom Duggan on July 1, 2014Comments Off on Recognizing The Merrimack Valley’s Long History of Dedicated Veterans 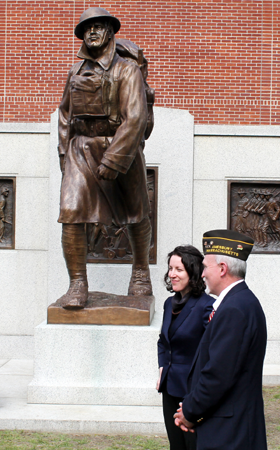 It has been a busy month in the State House, most significantly with the state budget, which the Senate passed on May 22. I’m happy to report that during the process I was able to secure key funding for priorities and initiatives that are important for citizens throughout our district and successfully advocated for policy changes that will improve quality of life throughout the state. I will be detailing specific aspects of the budget in next month’s column, after the budget has been finalized in the coming weeks.

This month, I want to share with you a wonderful event that took place in Amesbury leading up to Memorial Day. Each year as the weather starts to warm, our communities begin their summer with Memorial Day celebrations which recognize our veterans’ sacrifices. I had the honor of participating in Haverhill’s Memorial Day Parade and Ceremony and a flag raising ceremony at Nevins Family of Services in Methuen. In addition, I also participated in the re-dedication of the Amesbury Doughboy statue on May 17. The statue stands as a poignant testament to Amesbury’s long history of military service. It depicts a World War I soldier with a commanding march in front of Amesbury Middle School, flanked by plaques commemorating Amesbury’s contributions to military efforts from the Revolutionary War, Civil War, and Spanish American War.

Recently members of the Amesbury community came together to raise money for a complete restoration of this important historical monument. Now, instead of having an aged tint from decades exposed to the elements, the iconic statue is back to its original bronze condition. This restoration was made possible by the tireless efforts of the Amesbury Veterans’ Memorials Restoration Committee, which includes Co-Chairs Paul “Jancy” Jancewicz, and Ski Iworsky, Karen Baptiste, Bob Bastien, Bob Evans, Ruth Genova, Frances Justin, Kathy Lucy, Todd McGrath, Mary Therrien and Rosemary Werner.

When you’re in Amesbury, take time to visit the Doughboy statue. These are my remarks from the re-dedication of the monument’s Revolutionary War plaque:

“I’m honored to participate in this unveiling today because it’s the culmination of hard work and volunteerism by residents, other dedicated groups, and donations by generous individuals and our local banks–turning a hope of restoring the Doughboy into a reality.

“It’s important to show attention to, and investment in, a piece of Amesbury’s unique history. Gloucester hosts the Fisherman’s Memorial known as Man at the Wheel, designed by Leonard Craske, and built in 1925 and Amesbury is home to another Leonard Craske design–the Doughboy, a WWI-era soldier which has stood in Amesbury since 1929.

“This effort has been focused around restoring an important piece of Amesbury’s history and honoring what this statute stands for: commemorating and honoring the efforts, patriotism and sacrifice of all our United States veterans.

“I’m honored to speak to the naval battle depicted in this plaque, which harkens to the critical efforts on the open ocean in both the Revolutionary War and the War of 1812. Key efforts in the struggle for independence against colonial rule and foreign control through naval engagement were based right here where we live freely as Americans today.

“The Continental Navy was comprised of approximately 65 vessel and only 11 vessels survived the Revolutionary War, including a ship built right here in Amesbury. The Frigate Alliance, a 36 gun sailing frigate, was built in Amesbury on the Merrimack River in 1777 by William and James Hackett, and named the Alliance by the Continental Congress. The Alliance was thought to be the finest warship built to date in America when it was launched in 1778. The Alliance also fired the final naval shots of the American Revolution, and was the last ship in the fleet of the Continental Navy.

“On its first voyage where it arrived in France, Benjamin Franklin assigned the Alliance a squadron commanded by Captain John Paul Jones, who was the first well-known naval fighter of the American Revolution and referred to as the father of the U.S. Navy. He spoke the famous words ‘I have not yet begun to fight’ when up against the Royal Navy.

“Those words have been carried forth by the brave soldiers of our military in each succeeding war where each generation’s own patriots lead to defend the liberty that does not live in weapons or in buildings, but in the hearts and minds of our people. We can see that value in the work we are unveiling today, and it’s a credit to our nation, our city, and you that this statue and this plaque will stand here proudly for generations to come. Thank you.”

Video of these remarks featuring images of the Doughboy statue and plaque are up on my office’s facebook page: www.facebook.com/oconnorives.