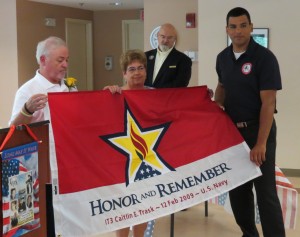 Their daughter, Caitlin Trask, was a member of the United States Navy in February of 2009 when she was murdered by her ex-boyfriend, also a U.S. serviceman.

The Honor and Remember flag is personalized flag with the name of the deceased service member, and is presented to the gold star families – those who lost a loved one in service of their country.

“This is done to remind these incredible families that we do not forget them or their loss as time goes by,” said Massachusetts Secretary of Veteran Affairs Francisco Urena. He added that the flag is of no cost to the families.
North Andover Veterans’ Services Officer Gerry MaGuire said that it was truly an honor to be able to participate in the presentation ceremony, which was held at the North Andover Senior Center.

The Honor and Remember Flag was created to serve as a national symbol that specifically acknowledges the sacrifice of men and women in the United States Armed Forces who have given their lives for their country in over two centuries of America’s history.