By Tom Duggan on August 8, 2012Comments Off on Republican Candidates Spar in NH Governor Debate 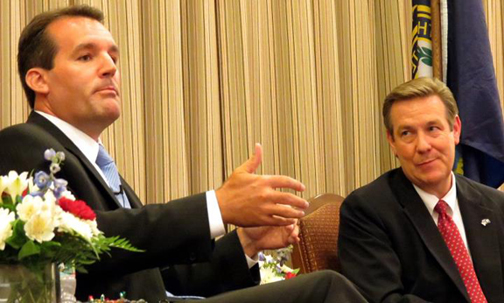 Ovide Lamontagne and Kevin Smith Spar Over Who Should be Governor

Last month republican candidates for Governor of New Hampshire, Ovide Lamontagne and Kevin Smith, sparred over who was “more republican” and their different set of priorities for their state. The debate was sponsored in part by The Valley Patriot and 980WCAP, was hosted by John Burt, and was moderated by New Hampshire Speaker of the House William O’Brien and Alex Talcott of 4RG.

Who is more Republican?

“I will take issue with something that Ovide has said repeatedly on the campaign trail and that is, that he will check his republican label at the door,” Kevin Smith said during the debate. “I am proud of my republican influence. And I’m proud of it because it stands for personal responsibility; it stands for limited government, free enterprise, low taxation, low spending, and all those things we believe in. So, even though I will reach across the aisle to work with the democrats, I’m not going to check my party label at the door just because I’ve been elected to the position. I’m going to carry those principals and tenants into the governor’s office with me and will govern off those principals as well.”

In an interview after the debate, The Valley Patriot asked candidate Kevin Smith to expound on his contention that he is more republican than Lamontagne.

“Look, it’s the same principles that Ronald Reagan had when working with a democratic congress. You know Tip O’Neill from the state of Massachusetts was a Democrat and certainly they were civil to one another. They got along, but they had their disagreements over policy issues. I will certainly have my disagreements with the democrats. I will try to work with them as effectively as I can, but as a republican I am certainly not going to check my principals at the door either.”

The Valley Patriot also caught up with Ovide Lamontagne and asked him what he thought about Smith’s assertions about the republican label.

“Anybody who knows my history knows I have been a republican my entire life. You should ask him if he has been a republican his entire life and see what he says about that. I have been a warrior for Republican causes. I’ve been platform committee chairman. I’ve played a role as legal counsel for the state party and a candidate for office as a proud republican. But, when it comes to serving the people of New Hampshire, you can’t use the party label as a barrier, and I won’t. I am going in there with my conservative principles; my value set is all republican. But, I am not going to use my party label to bar entry for people who aren’t republican or deny services or access that is the clear distinction. If he insists that he is going to use the party label as some kind of moniker for himself, in a way that may not be appropriate for the governor of New Hampshire.”

During the debate Smith addressed New Hampshire’s inability to attract jobs from surrounding states. We caught up to Kevin Smith after the debate and asked him to expound on how he was going to torture our governor here in Massachusetts.

“I look forward to being our states Salesman-in-Chief and one of the lines I have used very often is I am aiming to be [Massachusetts Governor] Deval Patrick’s worst nightmare. And I say that because I want him to know I am shamelessly going into his state and poaching jobs from the state of Massachusetts up here to the state New Hampshire. Why? Because New Hampshire is second in the country per capita of the amount of people who commute out of the state every day to go to work.”

“My father is sitting up here in the front row this evening; maybe you have seen his mug on TV recently in our new ads. He has been commuting to Boston since 1986, since we moved up here. But … I am only going to become a salesman if I give them a good reason to come up to New Hampshire. We have to become a more business friendly environment. We’ll do that by cutting our business profits tax, reducing the business enterprise tax, cutting through regulations, becoming a right to work state, lowering the cost of health care and electricity rates.

You know, my philosophy is that it’s not state government that creates jobs but it is state government that creates the environment and atmosphere for good jobs to be created. And I can’t wait to get on the phone, call up these CEO’s every week and say ‘hey, have you thought about doing business in New Hampshire? Why or why not? And let me tell you about the good things that we are doing here in this state and why you should be locating your jobs here.’

We always boast of a New Hampshire advantage in our state, Tommy, but the one thing that we don’t have an advantage on right now is creating good paying, high sustainable jobs,” Smith told the Valley Patriot. “There are too many people in our state that have to commute out of state every day to go to work in Massachusetts and they are paying income tax to Massachusetts as well. People like my dad would rather both live in New Hampshire and work in New Hampshire. So, what I have said is that as governor I am going to make New Hampshire a much more business friendly state and make it much more attractive for companies to move here. And I am serious when I say I am going to be bolder about poaching jobs out of Massachusetts and bringing them to our state.”

In our interview after the debate Ovide Lamontgne talked about his position on EBT (welfare) abuses in his state.

“Unfortunately EBT is a part of fed program that is administered here in New Hampshire to make sure that only those services and benefits which the truly needy, need, not beer and wine and other items that are commodities [being] provided to them. There must be a way to control this and so the recent stories of abuse in New Hampshire have underscored the fact that this system is broken and I am going to work very hard to get on top of that as governor to make sure we get control over our safety nets and make sure it is a safety net and not a hammock.”

But How Do You Fix It?

“It’s a multi-faceted approach, Tommy. First of all we need to make sure New Hampshire people are eligible and meet eligibility requirements. We don’t have a good auditing system in New Hampshire to do that. Secondly, we need to make sure that the benefits people are entitled to are very specific as to what kinds of food they can buy and what kind of items they can purchase as well as whether or not they should get cash out of an ATM or any of these other facets that are apparently not controlled. We need a good auditing system in the state to make sure the people’s dollars, the taxpayers’ dollars, are used only as a safety net for the truly needy in our state. I am going to make sure that happens if I am governor.”