By ValleyPatriot on February 23, 2020Comments Off on Roger Daigle Lived His Life with Love 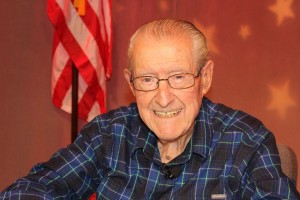 A bright light has gone out in Dracut. Former Selectman Roger Daigle, a well-known citizen who was well known for his strong opinions about our town, passed away January 15th at 92 years young. He was truly a member of the Greatest Generation, a man who loved his family, his country and his community for his whole, long and well-lived life.

To know Roger Daigle was to love him. At his funeral, one of his four daughters, Drucilla Fitzgerald, eulogized their father with some very personal and touching stories that made those gathered to remember his life nod their heads in agreement, laugh and cry. She was kind enough to let me share them here in remembrance of his life, his legacy and his sense of humor.
“Obstinate, cheap, opinionated, old-fashioned, chauvinistic, closed- minded…these are just a few terms that people have used to describe my dad. Truth be told, I have used these terms, at one time or another, to describe my dad. But those people who really knew my dad knew him also as a faithful husband, a loving father, a dedicated citizen, and a doting grandfather. A man of deep faith and integrity, a man who shared his knowledge with anyone who cared to listen – and even some who didn’t want to.”

Anyone who met Roger Daigle would have been smart to listen to him. He was full of wisdom, stories and knowledge. Conviction, facts and common sense guided his life.

“He enjoyed sharing his thoughts, ideas, and beliefs with the citizens of Dracut on his cable show Inside Dracut Politics. Despite the title, the political treatises went beyond the town borders. He spent hours researching and preparing for the show.”

Research he did. Roger Daigle’s office was his kitchen table and it was surrounded by organized stacks of file folders, legal pads and newspaper clippings that covered every imaginable topic, from decades gone by to the present day. He could quickly thumb through the pile to retrieve exactly what he was looking for.

Roger Daigle loved to sit at that table and talk and he loved to talk politics. But one of his favorite subjects was his family. He especially liked to reminisce about life with his wife of 64 years, Priscilla, who passed away in 2017. He lovingly called her “my redhead” and he always had a sparkle in his eye, a smile on his face and joy in his voice when he did so.

“Dad’s heart really shone bright when Mom was diagnosed with Alzheimer’s. He vowed to care for her at home as long as he could. And he did, with some outside help and with our assistance. He dressed her, took care of her bathroom needs, fed her, and told her every day that he loved her.”
Roger Daigle loved his country and his community, too.

“Dad had a calling to public service. He was a Navy veteran, and after moving to Dracut in 1957, he worked on several boards and committees. He tried hard to teach us that good citizenship was important and that meant educating ourselves on the issues of the day.”

Roger Daigle continually educated himself and set an example for good citizenship.

“Dad often told me that one of the things he missed most was playing golf. It was a sport he and Mom played together and greatly enjoyed. So, I’m thinking Dad already has his tee time set at Heavenly Acres Country Club. Hit ‘em straight, Dad.”

If anyone was a straight shooter, it was Roger Daigle. All of us in Dracut and far beyond should be inspired by his life of dedication, devotion and dignity. May he rest in peace, with gratitude from his family, friends, community and country.

— Brian Genest is chairman of the Dracut Republican Town Committee and a member of the Massachusetts Republican State Committee representing the Second Essex & Middlesex district of Andover, Dracut, Lawrence and Tewksbury. ◊