By Alex Talcott on April 19, 2015Comments Off on Running for Acadia in Boston 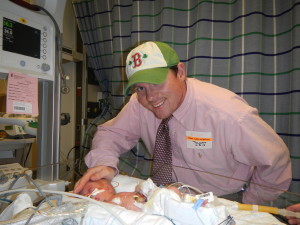 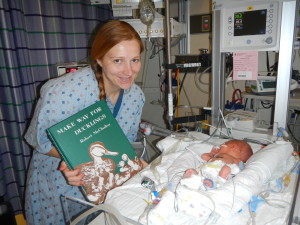 Chylothorax is unfortunately not the genus of a beautiful spring flower. It’s the congenital lung disease that took the life of a day-young Durham child two Aprils ago. Kristin and Alex Talcott, parents of the late Acadia Jeanne Talcott, still think of their daughter as strong and of early blooming daffodils as a vernal symbol.

Kristin will run the April 20th Boston Marathon in honor of Acadia, named for the Maine national park, and in support of Boston Children’s Hospital, whose doctors cared for her in collaboration with the Beth Israel Deaconess Medical Center. The family is halfway to a fundraising goal of $6,000.

Twenty-eight weeks into an “easy” pregnancy, Kristin was feeling great with everything normal. She was doing everything “right”—eating organic foods, exercising (but not too much), reading to the baby daily, and talking to her and touching her when she moved or kicked. But during a routine scheduled anatomy scan, a nurse practitioner had trouble hearing a heartbeat clearly.

The maternal fetal medicine department of Beth Israel then confirmed Acadia was small, but not alarmingly so. Alive and active, her lung cavities were filled with a large amount of fluid that was compressing them, impeding their development. Five weeks later, after much monitoring and several procedures, Acadia was born. She cried and offered other signs of hopeful health. But into the next day, she was unable to sustain and develop breathing, even with machine support.

The Talcotts got to know and appreciate round-the-clock caring doctors, nurses, technicians, and receptionists. Among the kindest was a doctor nearing the end of a fellowship. Both hospitals are “teaching hospitals” affiliated with Harvard Medical School. The Talcotts connect with the educational aspect; Kristin is a school social worker in the MSAD 60 district (North Berwick, Berwick, and Lebanon, Maine), both parents doctors, and Alex teaches law for Southern New Hampshire University, his mother a nurse.

The running of the race doesn’t daunt Kristin, who has previously completed marathons in Nashville, Chicago, and New York. “For a lot of people, the finish line seems impossibly far away. I’m running in remembrance of the time when I couldn’t see the next step.” She has met only a few area parents who have lost young children.
Children’s mission to “make every child well” is bold and beautiful, like Acadia will forever be to the Talcotts.

To contribute to the Miles for Miracles team of the Boston Children’s Hospital Trust: http://bit.ly/1HbAqfm

Alex Talcott, J.D., teaches college and high school history and international studies and is an academic advisor to undergraduate and continuing education students. He lives in Durham, New Hampshire. Follow him on Twitter @AlexTalcott