By Tom Duggan on January 14, 2013Comments Off on School Committeeman Chaisson in Methuen Says Tribune Attack on his Family “Disgusting” 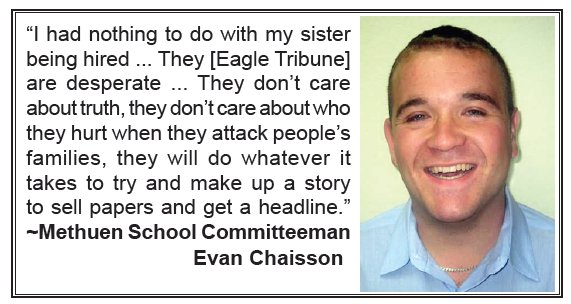 SAYS HE WILL BE CANDIDATE FOR WEST END DISTRICT COUNCIL

Methuen School Committeeman Evan Chaisson says he is “disgusted” with The Eagle~Tribune after the once thriving daily newspaper published an “article” on Monday making it look like his sister was hired as a teacher because of his elected position. (TRIB STORY HERE)

“I could see if there was any truth at all to this story, but there isn’t,” Chaisson said in an exclusive interview Monday with The Valley Patriot.

Chaisson cannot run for reelection to the school committee because of term limits.

Methuen School Superintendent Judy Scannell said she didn’t want to comment on today’s Tribune story, but did defend the hiring process involved in choosing Chaisson’s sister to teach at the high school. She also denied that Chaisson had anything to do with the hiring of his sister.

“What I can say about the hire is, all things considered, we hired the best candidate for the job. The job credentials are one thing we look at, but we also look at the interview and how someone presents themselves in the interview. Usually the person who presents themselves best in the interview is the person who gets the job. There was a committee made up of teachers and a department head doing the interviews. They picked the best person for the job and I can tell you that the principal loves her,” Superintendent Scannell told The Valley Patriot.

Chaisson On the Record

“This story was just an attempt to discredit myself and my sister for stuff that never happened. My sister is more than qualified to hold any teaching position in any school.”

Chaisson says that the job was left to seven individuals to pick the person to be hired, and that the committee was made up of principals, the social studies chair and teachers.

“I wasn’t on that committee. I had no say. But that’s not news, so they just tell the story they wanted to find when they started digging instead of the story they actually found.”

“There were two hires, and here is where the Tribune got it wrong again. One was hired before my sister. My sister was the second one hired after the second teacher left.”

Chaisson says that the Eagle Tribune story has been tough on his family because “my sister is not an elected official. She shouldn’t have to deal with public attacks because of who she is related to.  It really is not right. But they have no problem attacking her and making this a story when there was no politics involved at all.”

“But we know the truth. The public knows the truth, and those in the Methuen School Department know this was just a fabrication to sell newspapers.”

Asked if he was involved in the hiring of his sister in any way, made any phone calls, or had any discussions with anyone in the Methuen Public Schools: Chaisson said it was absolutely not the case.

“I had nothing to do with my sister being hired,” he continued. “This is what drives politicians nuts. And it’s what makes good people not run for office. Who wants to put up with this kind of attack on a family member?”

Chaisson vehemently denied even knowing his sister had applied or asking anyone in the school system to hire her.

“Absolutely not. No. I stay completely out of it. It’s not my responsibility to hire teachers for the Methuen Public Schools. I had nothing to do with it.”

Chaisson said he didn’t even know that his sister had applied for the job until after her interview with administrators.

“I didn’t know she was applying.I found out when she told me after she went to the interview. I found out she was awarded the job after she received a call from the building principal.”

Asked if he spoke with anyone in the administration about his sister’s application Chaisson says that it just didn’t happen.

“I didn’t speak to anyone about it, nobody contacted me about it. My job is budget and policy, not hiring. The way the Methuen Public Schools hires employees is very professional. We [The Schoool Committee] don’t know who is applying till after anyone is hired.”

The School Committee does not vote on hiring teachers.

One: it sullies the name of the official they are writing about, by putting a negative image in people’s minds about him, even though he was not involved in any way. A politician’s public image is his bread and butter.

Two: it elevates public official’s family members, (and EVERYTHING in their personal lives) to be fair game material for public consumption in the Tribune, even unfounded accusations.  (see Chaisson Story)

They also went after Methuen Mayor Steve Zanni’s wife (ZANNI STORY HERE) and mislead their readers to believe Mayor Zanni’s wife’s family dispute over inherited property in Lawrence had something to do with Mayor Zanni’s efforts to clean up blighted homes in Methuen.

They also attacked the family of Methuen Superintendent Scannell last year when she was on vacation and her daughter held a party at her Methuen home (SCANNELL STORY HERE). Despite the fact that no special treatment was given to Scannell’s daughter, they published an “Article” making it look as though special favors were given because the daughter was not arrested.

Evan Chaisson is a former Assistant Circulation Manager at the Eagle Tribune. He left the job last year. During our interview he told The Valley Patriot that he got the job because he knew someone who worked there.

“And my father works there now. You know how he got the job? Because I worked there. They hired him because of me. If you look at the people who work at the Eagle Tribune, it’s loaded with family members. They all got the job because they knew someone or they were related to someone. Isn’t that ironic.”