By Jeff Katz on October 31, 2015Comments Off on See Something, Say Something, Unless…. 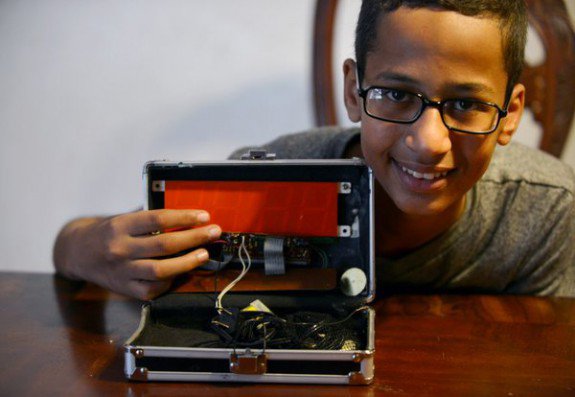 “It is clear Ahmed’s teachers failed him” said White House Press Secretary Josh Ernest when he was questioned about a fourteen year old student in Irving, Texas. No, Mister Spokesflack the failure here came on the part of those who thought the real story would never be revealed.
There’s little question that Ahmed Mohamed seems to be a bright kid, known to many in his former middle school as something of a science geek. So it should not have raised any warning flags that Ahmed built a device of some sort and entered in to the school science fair. Nobody would have thought twice if Ahmed demonstrated how science could help cure a disease or unite people in their pursuit of knowledge. The problem, of course, is that Ahmed’s story does not really involve any of those aspects. No science fair. No positive actions. Oh, and for the record Ahmed was actually a freshman in his new high school when he brought his device to school. Just three weeks in to the school year so it is rather unlikely that any of the teachers had come to pass judgment on his scientific acumen and prowess.

One day, Ahmed simply decided to bring a home built device to Macarthur High School. He claimed that he had invented a clock, but what he had actually done, according to engineers who viewed it, was to smash open a clock and re-arrange its parts inside of a small suitcase. He placed this device in to his backpack and showed up at school. No science fair entry this, it was simply a matter of show and tell which is a little unusual for a teenager. Ahmed carried this device around in his backpack for a number of class periods until it began to beep during one class. The teacher in that class asked what it was and Ahmed opened up the backpack to reveal what looked, to most, like a suitcase bomb complete with a digital readout counting backwards.

The teacher was concerned it might have been a bomb and rightly so. Ahmed was sent to the principal’s office where he was questioned by local police officers. Those officers indicated that Ahmed never gave a complete answer and, in fact, according to them he was passive aggressive when he did answer. Not surprisingly, Ahmed and his device were removed from the school and that’s where this gets all the more interesting.

Ahmed’s father who seems to be find “Islamophobia” everywhere when he’s not busy running for President of his native Sudan enlisted the help of C.A.I.R. which is also known as an unindicted co-conspirator in the Holy Land terrorism trial and together they launched an extensive media campaign designed to convince people that young Ahmed was the victim of some sort of anti-Muslim bigotry.

This all sounds a lot like C.A.I.R.’s actions back in 2006 when it tried to convince people that six Muslim men on a U.S. Airways flight were the victims of anti-Muslim bigotry when they were removed from a flight because their behavior onboard alarmed passengers and crew members. The so-called “Flying Imams” refused to sit in their assigned seats, requested seatbelt extenders they did not need and then began fanning out in the cabin in pairs as they began to occupy exit rows in the front, middle and back of the aircraft all the while talking about al Qaeda and Osama bin Laden. Move along now, nothing to see here.

Most of the media bought in to the provided pre-written narrative as did President Obama who invited Ahmed to The White House, but the reality of the story is that we live in a zero tolerance world, especially inside schools. We’ve seen a boy suspended for making an imaginary bow and arrow with his fingers. Don’t forget the child who was kicked out of school for saying bang. Oh, and the student who was expelled for chewing his Pop Tart in to the shape of a gun still has not received his Presidential invite. Ahmed’s sister now admits that she was suspended from the same school three years ago for an alleged bomb threat. Perhaps President Obama will invite her for a visit as well.

No, this was not a case of profiling someone based on their faith. It was simply the story of an inventive but evasive teenager apparently prodded by an agenda driven father and emboldened by the professionally aggrieved who found all too willing accomplices in the media and political ranks.