By ValleyPatriot on September 1, 2004Comments Off on SENIOR MOMENTS WITH JAMES CASSIDY 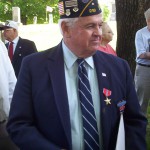 As we remember the anniversary of 9/11, the most devastating attack on American soil, all Americans must also be constantly reminded of this: since the Civil War, veterans who have fought and defended this country’s liberties and freedoms have been assured that America would make the very best efforts to take care of them with their battle wounds and their health care needs—our simple commitment to their great sacrifice….

The yellow ribbons have faded and are fraying outside the neatly appointed house in Manassas Park, VA where Jay Briseno lies tethered to a respirator, his nearly motionless, 21 year old body a shrunken shadow of the young man who last year went marching off to war.

Shot in the back of the neck in Baghdad on a sweltering afternoon in June 2003, Briseno was rushed with all the speed and efficiency the Army could muster to one hospital after another. Skilled physicians brought him back from multiple heart attacks and strokes.

But Briseno isn’t a soldier anymore. He is a veteran, facing a lifetime of excruciating disability. The efficient war-fighting machine he was a part of has moved on. His care is left to his parents and sisters who, bent over his bed day and night, are struggling to adjust.

For Briseno and his family – as for thousands of others wounded in the Iraq war – the transition from the life they knew as soldiers to a future as disabled veterans is filled with frustration and pain. The military is more efficient than ever in treating its wounded. But after the battle-scarred leave Army hospitals, they often find themselves on their own in an unfamiliar and difficult-to-navigate thicket of benefits and services.

Since the wars in Afghanistan and Iraq began, 6,239 troops have been wounded in action, according to a recent Pentagon count. Of these, 57% were so severely injured that they were unable to return to duty. Medically retired from active duty military service, they need immediate assistance from the Department of Veterans Affairs healthcare system.

The surge of newly disabled veterans represents a challenge of a magnitude unseen since Vietnam.

Aware of potential pitfalls, the Army and the VA have started programs to reach out to the most severely wounded soldiers. Among the steps being tried are putting social workers in hospitals where the severely wounded are being treated, adding benefits experts willing to meet bedside with soldiers and creating call centers that offer advice and help after the injured are sent home.

The pilot programs are small and both the Army and the VA acknowledge they are not nearly enough.

Congress has yet to allocate funds for the programs, which are being covered out of general soldier and veterans healthcare budgets. But already, case workers say they have helped some former soldiers get pay owed them and helped others get needed medical equipment and services.

In the case of Jay Briseno, Army officials interceded with the VA to get him a specialized bed that his parents said made it easier to care for him. The bed has a built-in scale so a nurse can weigh him without moving him and a platform that makes it easier to turn him the dozen times a day needed to avoid bedsores.

In looking to the government for their healthcare needs, new veterans follow a long line of their predecessors who, since the Civil War, have been assured that the country they fought for would make the best efforts to take care of them.

But there have always been difficulties in follow through. The VA is a difficult bureaucracy to navigate even in the best of circumstances, much less when dealing with devastating injuries. For decades, the VA with 7.5 million vets enrolled has struggled to keep up.

At any one time more than 3,000 vets are waiting for their first visit to the doctor. Those whose injuries from battle qualify them for disability compensation often wait six months to two years to receive it. The VA has taken steps to cut the wait for veterans of the Iraq and Afghanistan wars. In recent months it has begun to station benefit experts at the military bases of returning units. Newly discharged soldiers who have been helped by these experts have waited only 54 days on average to get their first veteran disability checks, a monumental improvement.

Help from the Army and from Social Workers with the VA have made a difference for many veterans, but the future is far more limited for Jay Briseno. In his parents’ home he lies in his bed, a stuffed animal from his childhood tucked into his motionless arms. A photo of him in uniform rest on the mantle nearby.

Although conscious, he is unable to move and his ability to communicate is severely impaired. His teen-age sisters have dropped many of their after-school activities to help out. The Deacon of their church comes by three times a week. His Mom and Dad don’t stay in their bedroom anymore—they sleep on a futon next to their son’s bed to care for him through the night. They have to: the money they get from the VA is only enough to pay for 19 hours a day of nursing care and he needs help all 24. Congress needs to correct these oversights in the system.

On this Healthcare issue all Americans must stay united and nonpartisan. They must reaffirm their pledge to take care of these young warriors and those of the past, who defended our liberties and freedoms in our times of need.

—God bless them all and God bless America.