By ValleyPatriot on February 29, 2020Comments Off on Servant ~ TV TALK with BILL CUSHING 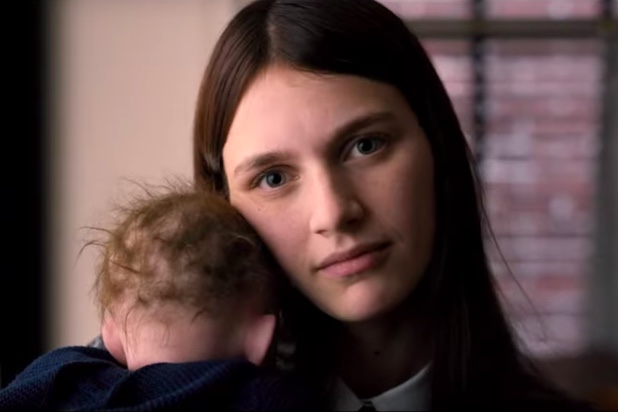 The series stars Lauren Ambrose (Six Feet Under) and Toby Kebbell (Black Mirror) as Dorothy and Sean Turner. They are still in mourning and recovering from the loss of their son Jericho, who died several months earlier. The events surrounding his death are revealed in more detail as the series progresses.

Dorothy took the infant’s demise so hard that she was in a catatonic state for a time. That is until she is given a Reborn Doll as part of her Transitory Object Therapy. A Reborn Doll is a dedicatedly detailed baby doll that looks very much like the real thing. Believing it’s her son, Dorothy treats the doll like a live baby, changing its diapers, singing it lullabies, and calling it Jericho. Sean goes along with it, as does her brother Julian played by Rupert Grint (Harry Potter), afraid that if they don’t it will send Dorothy spiraling psychologically out of control again.

But things get more complicated when Dorothy insists, they bring a live-in nanny into their home. Enter the mysterious Leanne Grayson played by Nell Tiger Free (Game of Thrones). Leanne seems to instantly bond with Dorothy, but she makes Sean and Julian very suspicious and uneasy.

When Sean is alone with Leanne, he tells her that she doesn’t have to pretend to care for the doll when Dorothy isn’t there, telling her she can drop the act of caring for the doll as if it were real. She doesn’t. Sean also begins to experience strange things himself. He’s a chef and cooks a lot at home testing recipes. Soon after Leanne arrives, Sean finds a sliver of wood in his food. Shortly after that, he loses his sense of taste, which makes it tough to do his job. He suspects Leanne is involved but can’t be sure. Then at the end of the first episode, in a type of twist that Shyamalan is famous for, things take a very strange turn.

The cast in ‘Servant’ is quite good. Ambrose and Kebbell are excellent. Ambrose plays a very different role than we saw in Six Feet Under, giving Dorothy an almost uncomfortable edge as she tries to balance her TV anchor job with motherhood, all while her trauma is trying to bubble back up. Kebbell plays Sean just right, showing compassion for his wife and allowing her to have the nanny, while still being highly suspicious of Leanne and her motives. Grint is very good as Julian, adding some comic relief at times. This should be the role that breaks him free from Ron Weasley, the character he played in 6 Harry Potter films. But the real breakout performance in ‘Servant’ comes from Nell Tiger Free who brings such a mystery to Leanne. Seeming to be so gentle and naïve one minute, and then showing that she has a much darker side in the next.

The show’s mysterious feel also comes from how it is filmed. The action almost never leaves the Turner’s brownstone, which seems so dark, emotionless, and cold that you almost feel like you need a sweater when you are watching. The apartment almost feels like a character in itself, adding to the tension in many of the scenes.

Each of the 10 episodes of ‘Servant’ runs between 28-32-minutes. This was a great decision. I feel like the narrative would have started to deteriorate if the episodes were stretched to 45-60 minutes.

As creepy and unsettling as ‘Servant’ can be, it’s also a fun watch. I don’t want to give away too much, but the finale opens up a whole new direction for season 2, and yes it has already been renewed for a second season.

‘Servant’ is available to stream on Apple TV+.

If you have any questions about TV, you can email me at

BillsTVTalk@gmail.com. I will answer all of your questions and will feature some of the questions I receive in a future Mailbag column. Follow me on Twitter @BillsTVTalk and on Facebook at BillsTVTalk for daily up-to-the-minute TV news and discussion. ◊