By ValleyPatriot on May 6, 2022Comments Off on ‘Severance’ ~ TV TALK with BILL CUSHING 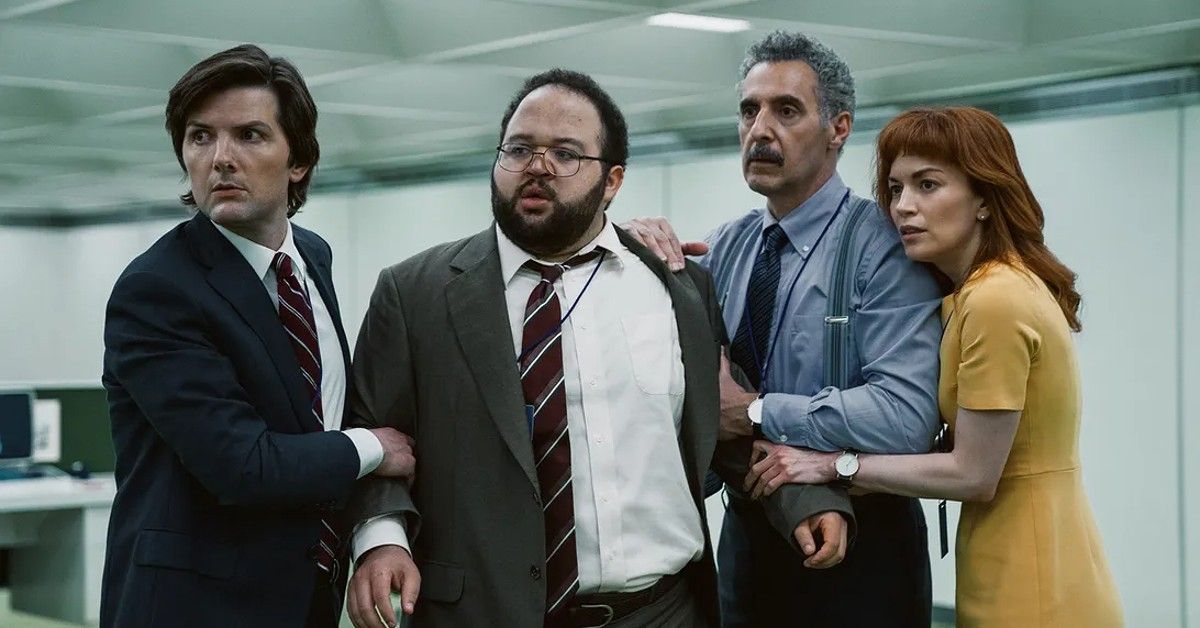 What if you were able to create a true separation between your work life and your home life, by dividing the connection between the memories you make at work and the thoughts you have when you’re away from the work? That’s the intriguing question that AppleTV+’s ‘Severance’ poses.

After his wife dies in an accident, Mark S. (Adam Scott) is hired by a mysterious corporation called Lumon Industries. Lumon offers a procedure called “severance.” Severance is a process which surgically separates work-related memories from personal memories via a brain implant, and it is required if you want to work in certain parts of Lumon. So, every morning, Mark goes to work at Lumon and forgets about his grief until quitting time. Mark’s “innie” (his work persona) has no knowledge of his life outside the office, while his “outtie” (his home persona) has no recollection of what goes on inside Lumon’s walls.

After the abrupt disappearance of his supervisor and work friend Petey (Yul Vazquez), Mark is promoted to the head of Macrodata Refinement, just one of many separate departments on the subterranean “severed” floor at Lumon. He monitors a team that includes Dylan (Zach Cherry), obsessed less with the job itself than the silly perks presented to those who do the job well, and Irving (John Turturro), a stickler for workplace protocol and devotee of the Eagan family, who are the founders of both the company and Kier, the company town where our characters all live.

The latest addition to the team is Helly (Britt Lower), whom we meet in the premiere episode. We see her hiring process where she’s asked a series of questions that reveal she has no idea who she is or why she’s there.

Basically, this version of Helly only exists in Lumon, and everything that happens there will be wiped from her memory as she takes the elevator home that night. Helly is not an enthusiastic participant. Mark is the only character whose outie we follow, and is beginning to suspect something isn’t right at Lumon.

What the company really does – precisely what data the protagonists are actually spending their days sorting into unnamed files – is unknown. But the signs aren’t good, given that they are presided over by the unbending, unsmiling and unsevered boss Harmony (Patricia Arquette) and her too happy and equally unsevered assistant, Mr. Milchick (Tramell Tillman, in a hypnotic and terrifying performance).

The mystery of Lumon starts to unravel when Mark meets a man on the outside and the man tells him he is his former colleague and best friend Petey. Mark, with no memory transferral between the two worlds, obviously doesn’t recognize him. Petey has undergone a supposedly impossible re-integration procedure and has sought out Mark to deliver the terrifying message that severance, and Lumon, are a threat to humanity.

‘Severance’ is a slow burn that masterfully controls its momentum over the course of nine excellent episodes, 6 of which are directed by Ben Stiller. The show gets more and more effective and riveting as it goes along and builds to a string of cliffhangers that leaves the viewer eager for more instead of frustrated. In a time when most of us are returning to the office, ‘Severance’ gives us something to think about.

‘Severance’ is available to stream on AppleTV+.

If you have any questions about TV, you can email me at BillsTVTalk@gmail.com. I will answer all of your questions and will feature some of the questions I receive in a future Mailbag column.
Follow me on Twitter @BillsTVTalk and on Facebook at BillsTVTalk for daily up-to-the-minute TV news and discussion.◊