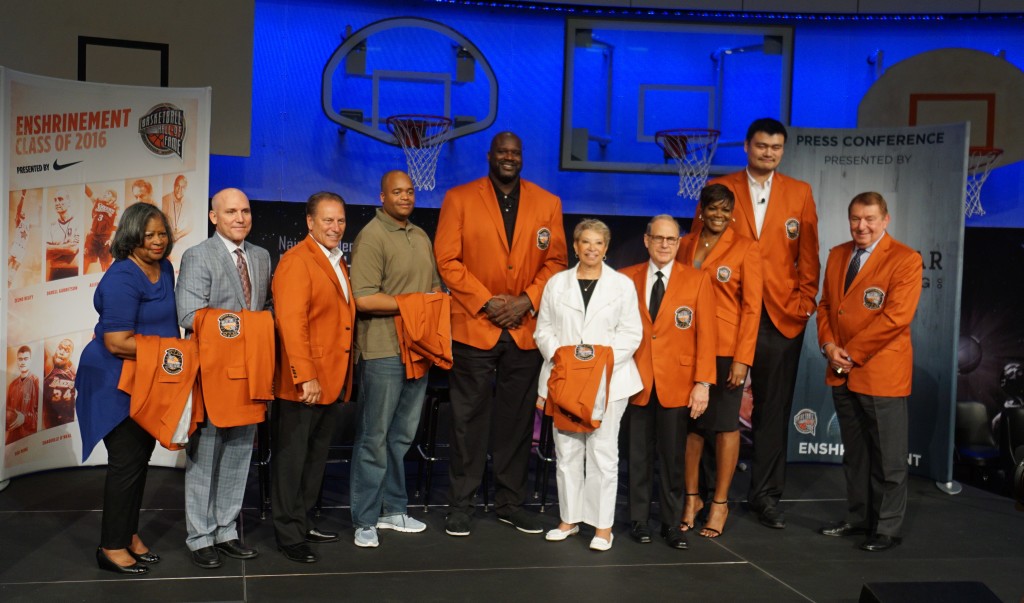 On September 8, 2016, this year’s basketball festivities began at a press conference held at the Naismith Memorial Basketball Hall of Fame in Springfield.

With the number one draft pick on June 24, 1992, the Orlando Magic picked Shaquille O’Neal out of Louisiana State University. Twenty-four years later, the most dominant player in the history of the game was in the “center” of the 2016 Class to be enshrined into the Hall of Fame.

With a 19-year career, playing for six different teams, winning three consecutive championships with the Los Angeles Lakers from 2000-2002 and a fourth with the Miami Heat in 2006, O’Neal played with the best of the best.
To name a stand out on each team O’Neal played with Penny Hardaway on the Magic, Kobe Bryant with the Lakers, Dwayne Wade with the Heat, Steve Nash with the Suns, LeBron James with the Cavaliers and Paul Pierce with the Celtics.

Known to many as Shaq, the 7’1 Center coming from Newark, New Jersey had many nicknames. O’Neal was also known as Shaq Daddy, Shaq Fu, The Big Aristotle, The Big Shamrock as well as Superman and The Diesel, amongst others.

Being enshrined into the Hall of Fame, O’Neal said, “It’s overwhelming, it’s surreal, it’s awesome. As a kid being told so much that you’re not that good, I never really thought I would get here. I’m the type that I have to have other people say it for it to be validated.”

Reminiscing back, O’Neal said “I think it was around the Final Four time” speaking of when he first heard the big news. “I got an email first that they were going to call at 12:00. I missed the call so I was thinking ‘oh shoot, I missed it, does that mean I’m out?”’ Calling the number back, O’Neal said a woman named Fran picked up and said, “Congratulations, you’re in the Hall of Fame!”

Speaking to the Big Hofer as O’Neal jokingly nicknamed himself saying “The Big Hall of Famer” about dunking so hard, the basketball rim and backboard came down, he said he tore off 10 rims in his career.

Trash talking to opponents during his career to get inside their head and throw them off their games, O’Neal mentioned that he had a great game one night against the Houston Rockets but his father was upset at him.

“My father called me and said, ‘You need to take a private jet home now. After we played Houston, I had a pretty good game against Yao. My father felt I was being disrespectful to a kid who looked up to me. He made me come home one day and opened up a box. Yao had written me letters from when he was a youngster, exclaimed O’Neal telling a table crowded with reporters that Ming would send him Christmas and birthday cards.

The Diesel explained that his father said he should show Ming more respect. “You know the way I played; I was just aiming to destroy everybody and my father said this kid looks up to you and me and my father loves children, not saying Yao’s a child but we loved the kids and the fact that a kid from another country was looking up to me, he said, ‘I think you should show him and his people a little more respect.”’

From that moment on, the two seven footers became good friends and sometimes meet when they are both in China to hangout.

The Naismith Memorial Basketball Hall of Fame is located at 1000 Hall of Fame Avenue in Springfield, MA 01105. For further information, go to www.hoophall.com or call 877-446-6752.

Besides journalism, Shawn Hansen is a Full Time Real Estate Agent at CENTURY 21 Advance Realty in Medford and serves all around Massachusetts so, if you or anyone you know are looking to Sell a house, Buy a house or complete both transactions, call Shawn Hansen today at 978-621-6763 or send an email to shawnhansen@c21advane.com.