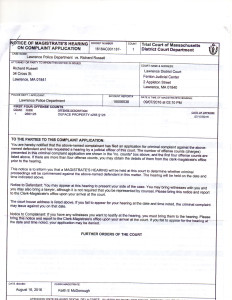 Essex County Sheriff’s candidate William Castro of Lawrence, has filed a false police report against a campaign rival’s volunteer, claiming the volunteer was responsible for stealing and damaging campaign signs.

Castro claims to have suffered $900 in damages from stolen and damaged signs at the hands of Vietnam veteran, Richard Russell, a campaign supporter for Sheriff candidate Jerry Robito, but offered no proof, or even evidence that Russell was responsible for any of those alleged losses.

In fact, according to Castro’s own statements to police, Russell did not damage to his signs. 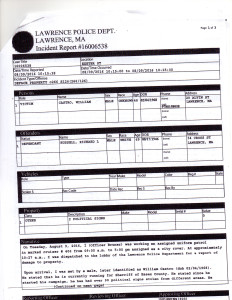 Despite having video to the contrary, Castro swore out a criminal complaint against Russell  on August 16th, at the Lawrence Police Department alleging Russell stole and damaged his signs, demanding a court date.

According to the police report filed by Castro, where he lists his race as “unknown”, he reports:

He (Castro) stated to police that he watched Russell “use duct tape to affix a piece of paper to his William Castro sign.”

The piece of paper affixed to his sign read: “Don’t put signs on other candidates signs unless you have their permission.” 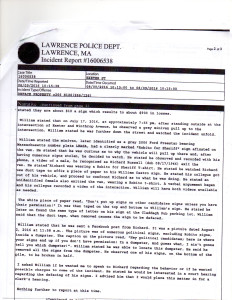 or his part, Russell says that Castro has been placing his ‘Castro for Sheriff’ signs on top of signs for other candidates, placed them in illegal locations, and on private property without permission of the owners.

“He is claiming I stole and damaged his signs by taping a notice at the bottom of them, letting him know had no permission to do so,” Richard Russell told The Valley Patriot.

“He is just trying to generate bad press for my candidate with his false accusations.”

“The fact is, Mr. Castro is running for Sheriff but doesn’t care about the law, and thinks he can put his signs wherever he wants just like his buddy Willie Lantigua. By law, I could have just taken them down. By his own admission I didn’t do that. But, he went ahead and filed a false criminal complaint against me, and now I have to take a day out of my life and go to court. When it’s over, I hope the Lawrence Police prosecute him for filing a false report.”

Russell said he is hiring an attorney to sue Castro for slandering his good name.

Castro also alleges in his complaint as proof that Russell committed a criminal act, that he posted a photo on Facebook of “numerous political signs, excluding Robito signs, inside a dumpster. The caption on the picture read “Hey, political candidates; here is where your signs end up if you don’t have permission [to put them up]. In a dumpster!”

Castro claimed he found the dumpster with his and other candidates signs in them and that one sign “was broken in half.”

According to Russell, the photo Castro posted on line of his “sign broken in half” was photo-shopped from the original photo Russell posted. 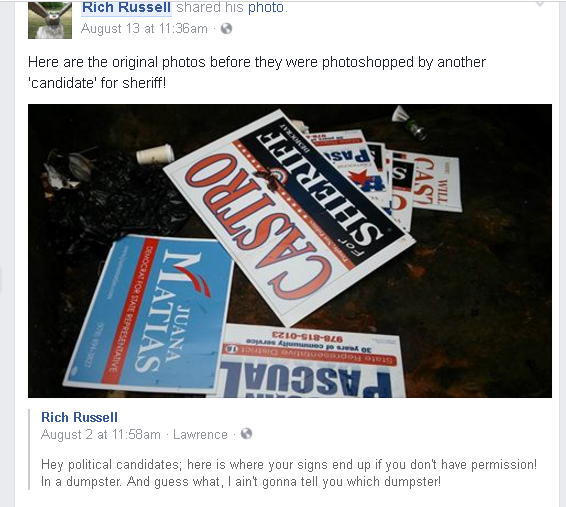 “We were told by the owner of the Claddagh Pub that anyone who put signs on their property without permission would be taken down. They took down the signs and put them in a dumpster. I was letting all the candidates know on Facebook that illegally posting sings on private property would end up like this.”

“How he goes from that, to accusing me of damaging and stealing his signs is beyond me. He has no proof, he has no evidence, in fact his video evidence does not show me stealing or damaging signs, and I am  use his video as my defense, in court,” Russell says.

“But this isn’t the first time he has made a false accusation against me to try and hurt my candidate, Mr. Robito.”

“Last week, he posted on Facebook that I had been arrested for stealing signs in the past.”

“He even posted my picture with an arrest record that belonged to someone else. And when he was informed that the Richard Russell who was arrested was not me, lives at a different address, and drives a BMW, which I do not drive, he still refused to take it down. He’s trying to get votes by slandering my reputation and slandering my candidate. He can’t get votes on his own, so he is trying to hurt my candidate just days before an election.”

Candidate William Castro did not respond to requests for a quote for this story.

EDITORS NOTE: Richard Russell is a volunteer photographer for The Valley Patriot.