By ValleyPatriot on June 17, 2018Comments Off on SNHU DISGRACES POLICE AT GRADUATION ~ VALLEY PATRIOT EDITORIAL, JUNE 2018 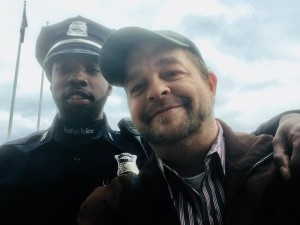 Upon entering the building he learned that a Boston Police Officer named Brian was attending the graduation in uniform to celebrate his girlfriend getting her degree.

But, college officials treated Officer Brian like a criminal, telling him he could not attend the graduation in uniform and with his gun because he was not officially on duty.

Duggan spoke to the officer who said that they first tried to deny him entry to the graduation and then told him that if he dissembled his weapon and put it somewhere off property they would then allow him entry even though he was in uniform.

For his part, the Boston officer said he wasn’t angry, just confused.

“We are the good guys,” he told Duggan, not realizing Duggan was a member of the press.

“They made me take apart my weapon. What if something happens here today? We sign up for this job to help people, to protect people. If something happens today you’d think they would want another good guy with a gun to help out.”

Instead, it’s clear that SNHU officials would prefer he be a marked target in the crowd, in uniform with no weapon to defend himself if violence broke out.

This is nothing short of disgraceful and a slap in the face to all law enforcement officers who put their lives on the line every day to protect even the most morally confused among us like the faculty at SNHU.

What’s worse, SNHU defended their actions on their Facebook page when Duggan posted a question about their actions.

Someone from SNHU confirmed that they did indeed make the Boston officer leave and would only allow him back in without his gun citing that this was their “policy” … as if somehow hiding behind a policy makes it ok.

The actions of the SNHU faculty is indicative of how clueless our over educated and morally confused ruling class has become.

With the uptick in school shootings and mass shootings you might think that those running SNHU’s graduation would welcome as many cops with guns in the audience as they could get.

Because, in their fake world of left wing sedition, the police are the enemy. Law abiding people with guns, especially police officers, are to be hated and reviled.

We have to wonder if the real problem at SNHU was that they saw a black man with a gun and were so frightened that they felt it necessary to disarm him even though he was wearing a police uniform.

Shame on SNHU for letting their out of touch political views stand in the way of common sense and the safety of all those attending their graduation.