By Tom Duggan on November 1, 2012Comments Off on Son of Dead Holy Family Hospital patient to Meet with Officials, Declines Meeting with Hospital.

(Part II of on ongoing series)

State Senator’s William Brownsberger and Minority Leader Bruce E. Tarr, have scheduled a meeting with Brian Evans on November 13th at the State House to discuss the tragedy involving his mother, Helen Bousquet, who died at The Holy Family Hospital in Methuen, Massachusetts following knee surgery.

An inspector from the Board of Medicine says he will also be in attendance.

The meeting comes after Evans bombarded state and federal officials with complaints regarding his mother’s recovery room care, where a Helen Bousquet, (known by the hospital to have sleep apnea and a heart condition) was put in an unmonitored recovery room while on a morphine drip following knee replacement surgery.

Bousquet had been throwing up all day the day she went into cardiac arrest. According to her son, based on statements made to him, he says, by nurses, she was in the room for over an hour without being checked on.

“They said they checked on her at 8:00 PM, and then again just after 9:00 PM when they found her unconcious,” said famous crooner Brian Evans.”She was not on a monitor or the prescribed sleep apnea machine they knew she had to be on, especially on morphine which is known to slow your respiratory system and will put you in a deeper sleep,” says Evans.

“The nurses explanation was that they don’t given out sleep apnea machines until 9:00 PM when patients go to sleep, despite her being on morphine all day. The night before they never gave her a sleep apnea machine at all, at any time, so the nurses statement makes no sense. I’m surprised she even survived that first night following her surgery. After just one night following the surgery, they stuck her in an unmonitored room knowing she was in massive pain and throwing up all day while dosed up on morphine.”

Evans also takes issue with The Eagle Tribune, who has not written word one about this story.

“Unfortunately, the Eagle Tribune, in my personal opinion, is more interested in the buddy system than actual news. It’s publisher seems more interested in finding work as a ventriloquist than as a publisher of important information. His website, algetler.com, pretty much says where his head is at,” says Evans.

“That’s who is in charge of your Eagle Tribune and the news around you, and if they don’t like you, they smear you and rehash anything they think will hurt you,” says Evans. “When we ran an ad recently for one of my concerts for The Wilbur Theatre in Boston, they put the ad on the obituary page. Don’t expect coverage from a newspaper that prides itself as being a pulitzer prize winning newspaper. The writer who wrote that prize winning story has been long dead, but the paper loves to take credit for it. Meanwhile, you have someone alleging criminally negligent homicide and they don’t say a word. It’s not news to them that state senators are calling a meeting to discuss a woman who died in their own backyard, or that a criminal complaint was filed. It’s a newspaper, in my constitutionally protected opinion, that uses it’s newspaper as a weapon for those it has an axe to grind with rather than a vehicle of truth. It picks and chooses what they feel you should know, and it always has their arrogant spin on it that seeks to shoot down those it doesn’t like.”

Evans has retained counsel and will be filing suit against the hospital and physicians. Evans was approached by The Holy Family Hospital in a letter seeking a meeting with Evans. Evans declined. 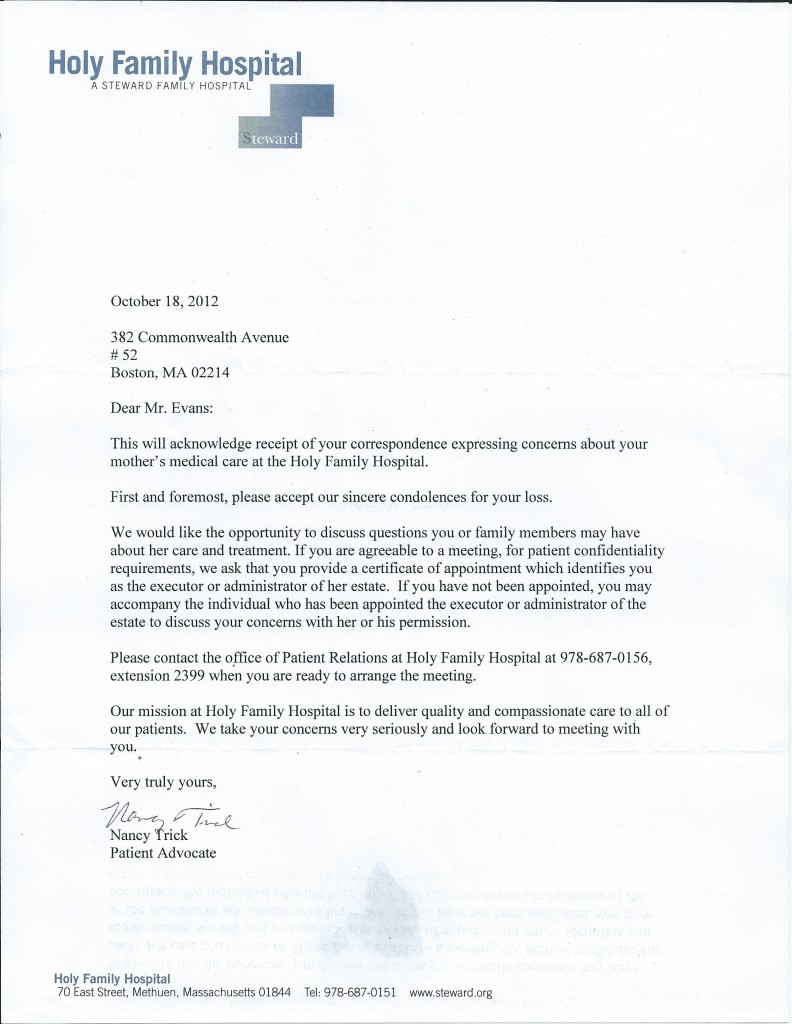 “I told The Holy Family Hospital that they have bigger problems than a meeting with me, and there is nothing they can tell me or offer me that will make me go away. One day I will see my mother again, and she will know I fought for her. She did not die so that I could buy a bigger TV,” says Evans. “Their ignorance took away the one person that loved me unconditionally, and you can’t buy that off of me.”

“I blame myself for not being there to save her from these complete idiots,” says Evans.

Evans has also contacted the Archdiocese of Boston to complain that the Catholic religion connection to this corporately owned hospital gives elder individuals the false impression that it is safer.

“People need to know that just because the word “Holy” is in the name, it doesn’t mean “safer,” he says.